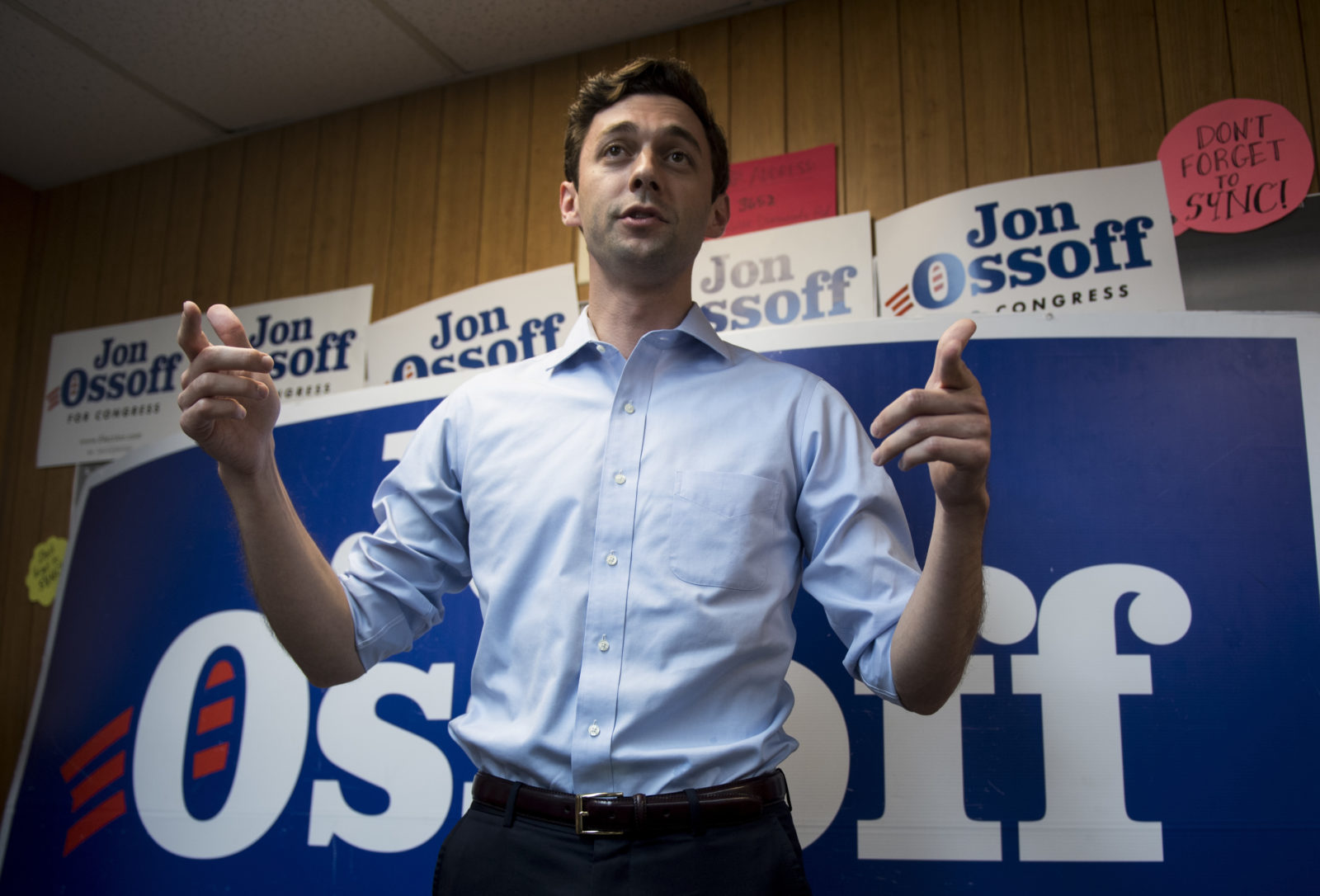 Jon Ossoff is back at it, with two competing Senate candidates on his heels

The former documentary filmmaker, who narrowly lost a 2017 congressional bid, is facing stiff competition in the upcoming primary

Jon Ossoff’s narrow defeat three years ago to former Republican Rep. Karen Handel (R-GA) only seems to have emboldened him as he now looks to unseat Sen. David Perdue (R-GA) this November.

“I’m focused on laying the groundwork to build a grassroots juggernaut that will unseat our failed incumbent,” Ossoff told Jewish Insider in a recent interview from his home in Atlanta.

The documentary filmmaker-turned-politician lost by nearly four percentage points in a 2017 special election in Georgia’s 6th congressional district, raising $30 million in what was then the most expensive House race in American history.

Ahead of the Democratic Senate primary on June 9, Ossoff has raised a mere pittance by comparison — more than $4 million, according to the Federal Election Commission — but he still leads the pack in a crowded field that includes Teresa Tomlinson, a former mayor and attorney, and Sara Riggs Amico, who ran unsuccessfully for lieutenant governor in 2018.

Experts say Ossoff, who has been endorsed by Rep. John Lewis (D-GA), has the edge among his Democratic opponents, though his nomination isn’t a sure bet.

Daniel P. Franklin, an associate professor emeritus of political science at Georgia State University, argues that Tomlinson may have more name recognition outside the Atlanta metropolitan area given her previous mayorship of Columbus, which is among the largest cities in Georgia.

That may not be enough, given that the majority of primary votes come from Atlanta, according to Charles S. Bullock III, a professor of political science at the University of Georgia’s School of Public and International Affairs.

But Tomlinson, who has built a strong virtual outreach campaign amid the pandemic, believes that her standing in Atlanta has been underestimated. She was born and raised in the city, she points out, and practiced law there. During Ossoff’s election in 2017, she noted, she worked as a surrogate on his behalf as he was running in her home district.

“Jon is going to do well, obviously,” she said, “but I think we’re going to split the 6th district.”

Still, Ossoff likely has the “inside track for the nomination,” Bullock told JI. “He mobilized a committed cadre of people who worked on his campaign. These supporters can’t go door-to-door for him, but they can talk up his candidacy with their friends.”

Ossoff, for his part, avers that his campaign has mobilized thousands of volunteers who are making phone calls and sending text messages to voters every day.

“We’re still doing a lot of direct outreach in the field,” he said. “The last few weeks have yet again demonstrated the racism and brutality of our criminal justice system, and we are elevating that issue, making sure that it’s at the top of the agenda.”

Ossoff, who is Jewish, said that his faith informs his approach to politics. “The experience of persecution and flight and massacre of my ancestors,” he said, “influences and strengthens my commitment to standing up alongside marginalized, dispossessed and persecuted people in solidarity with them to defend the human rights of all.”

Such views seem to inform Ossoff’s views on the Israel-Palestinian conflict as well. “A sustainable and humane resolution can only be achieved by diplomacy,” he said, noting that possible annexation of parts of the West Bank “would represent an abandonment of the peace process established in Oslo in 1993.”

“[Israeli Prime Minister Benjamin] Netanyahu and [Palestinian Authority President Mahmoud] Abbas are total failures,” Ossoff added. Still, he emphasized that he was “strongly committed to Israel’s security as a homeland for the Jewish people.”

“The U.S. should play an active and constructive role in setting the table for and leading the parties toward constructive diplomacy to put land disputes behind them,” he told JI, ”so that all people who inhabit this region can live in peace and prosperity and security.”

“U.S. foreign policy is in shambles right now,” he declared. “There is no clear progress toward any resolution of our disputes with Iran. The Trump administration withdrew from an agreement that limited Iran’s uranium enrichment and is now engaged in a seemingly endless series of tit-for-tat mutual provocations with no clear strategy.”

“That’s what happens when you have someone who’s incompetent, foolish and ill-informed as commander-in-chief,” he concluded.

Tomlinson, in her conversation with JI, was equally critical of President Donald Trump’s policies in the Middle East. “I think he puts Israel at risk,” she said, explaining that she opposed the president’s move to pull out of the 2015 Iran nuclear deal and that she viewed his decision to relocate the U.S. Embassy to Jerusalem as reckless.

Tomlinson added that she endorses a two-state solution and rejects the Boycott, Divestment and Sanctions movement, though she supports the First Amendment rights of those who participate in such boycotts.

Amico, for her part, believes that conversations around Israel have become overly politicized — and that it has become a “wedge issue” in campaigns.

“When I was growing up and studying all of this, 25 years ago, Israel was the one policy that was bipartisan,” she said. “It was just the one place people could agree on, even back in the turmoil of the Clinton impeachment years.”

One possibility on primary day is that Amico, who has name recognition throughout Georgia thanks to her statewide run two years ago, splits the vote and the election advances to a runoff. Amico, of course, may be counting on such an outcome, and she touts her status as an outsider — she worked as the executive chair of her family’s car-hauling business — to back up her contention that voters will favor her.

“I am not a politician,” she said, adding, “If the idea is we’re going to fix all of these deeply entrenched but really biased and broken systems by sending another politician to Washington — I mean, I don’t know what to say.”

If Ossoff advances to the general election, he could be in a good position to defeat Perdue, according to a recent Civiqs poll, which found that voters favored Ossoff over Perdue by a margin of two percentage points.

Amy Steigerwalt, a professor of political science at Georgia State University, was more tentative in her assessment of Ossoff’s chances but still not convinced that Perdue’s seat was safe.

“Perdue has been very strongly tied with President Trump, and at the moment that is, I think, hurting him because Trump himself is not polling particularly well in Georgia,” she said. “Does it mean that Perdue will lose? I don’t know. Is it going to be a much harder race than anyone predicted when he won the seat six years ago? Yes.”

Bullock was more sanguine, though he didn’t rule out the possibility that Perdue could be in trouble.

If Joe Biden, the presumptive Democratic presidential nominee, taps a Georgia politician such as Stacey Abrams as his vice presidential pick, that could generate a wave of black voting that could sink Perdue, he said.

“Or, if the young people, black and white, who are in the streets protesting today show up in great numbers in November,” Bullock added, “that could also flip Georgia from purple to sky-blue and send Perdue back to his gated community on Sea Island.”

Perdue’s team, for its part, is confident he will hold onto the seat.

“No matter which one of the seven far-left Democrat candidates wins their party’s nomination for this race, Georgia voters will reject their radical socialist agenda in November,” John Burke, Perdue’s campaign communication director, told JI in an email. “The people of this state have faith in Senator David Perdue’s leadership as a political outsider bringing change for working Georgians, and they will re-elect him to a second term.”

But Ossoff begs to differ, telling JI that the grassroots support he has been building since his congressional run in 2017 will propel him to the Senate in 2021. “We’re going on a when we’re elected basis here,” he said.