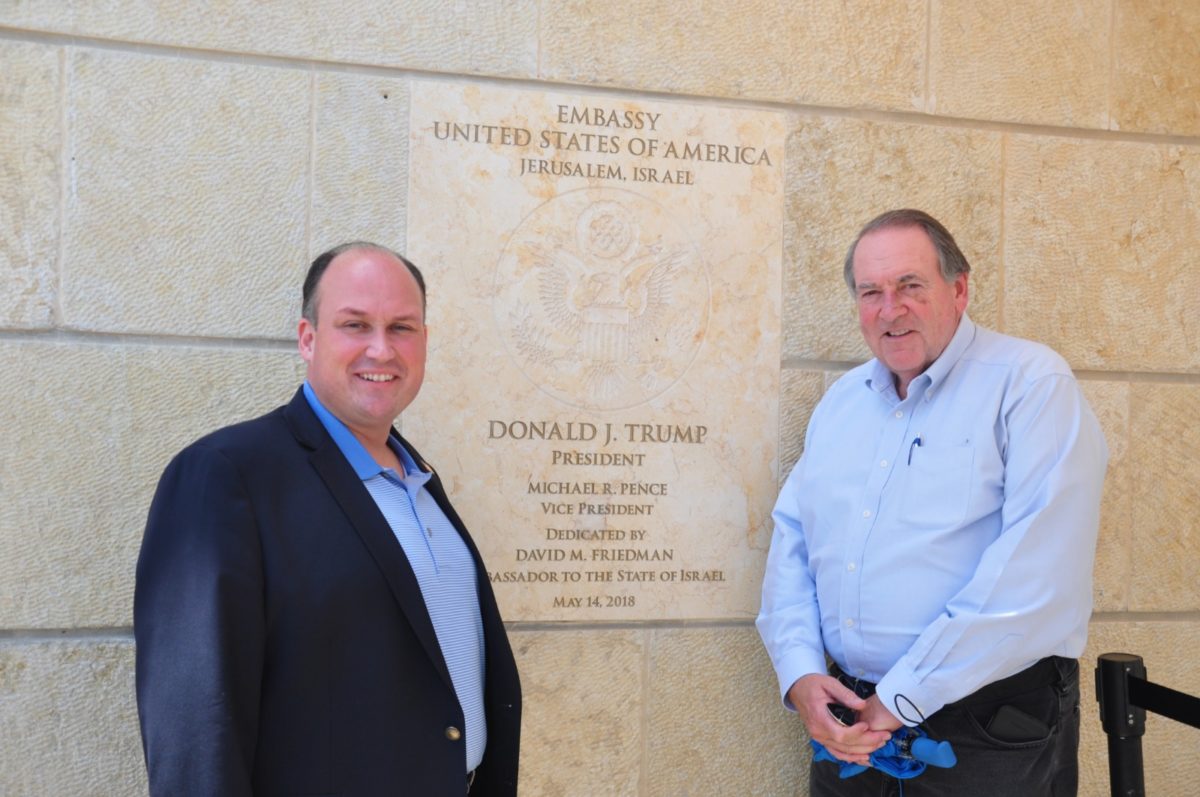 NY GOP Chairman Nick Langworthy and former Governor Mike Huckabee pose for a photo outside the U.S. embassy in Jerusalem this week.

The chairman of the Republican Party in New York is confident that President Donald Trump will help the GOP win back seats in Congress come 2020.

“I think the president at the top of the ticket makes those seats far more competitive, because people will be coming out to support the president,” Nick Langworthy, the new chairman of the New York State GOP, told Jewish Insider during a trip to Jerusalem this week. “It’s going to be a far different dynamic than the midterm elections.”

Less than two weeks after replacing longtime GOP Chair Ed Cox, Langworthy traveled to Israel, his first foreign trip on the job and his first time visiting the Jewish state. He visited along with former Arkansas Governor Mike Huckabee; Assemblywoman and 2020 congressional contender Nicole Malliotakis; and former Rep. Claudia Tenney, who has indicated she may enter the race for her former seat.

Langworthy said the party will “work hard to go capture those seats in Congress that we lost and slipped away from us in 2018. We have work to do there to pick those back up.” He said that he has pledged to run a Republican candidate in all 27 congressional races next year, “which has not happened in the past. So we have a lot of work cut out for us.”

He has his eye in particular on the three seats Democrats gained in 2018: NY-11, where Malliotakis is one of the Republican challengers against Rep. Max Rose; NY-19, served now by Rep. Antonio Delgado; and NY-22, held by Rep. Anthony Brindisi, who ousted Tenney after one term. Langworthy said he believes that Tenney “is getting ready to go have a rematch and go take that seat back.”

But former Rep. John Faso, who was unseated by Delgado in 2018, told The Times Union shortly after his defeat that NY-19 is a “district where being closer to the president would not have been helpful. This is a district where the anti-Trump intensity is stronger than the pro-Trump intensity.”

Langworthy, who replaced Cox as the state’s top Republican after 10 years, promised a very different style and approach for the party moving forward.

“We have not come off the greatest time in our party’s history,” he said. “We have not won a statewide election since 2002. We’ve lost our majority in the State Senate and we see the creep of socialism into our state government… we have to be bold and be aggressive as Republicans to fight back. If we try to appease that movement, by not taking it on directly, you’re going to normalize it.”

And he jumped at the opportunity to travel to Israel just days after starting the job.

“I thought it was important that we establish right away, the strength in the support level from our party that I intend to show as chairman for the State of Israel and the Jewish people, not just in New York and in the United States, but around the world,” Langworthy said. “This country and the United States share such a bond and… our state of New York, being the most Jewish state in America, we have to have that bond as well.”

Langworthy singled out fellow New Yorker, Rep. Alexandra Ocasio-Cortez (D-NY), for “emboldening antisemitism” with her use of the phrase “concentration camps” to describe immigration detention facilities along the southern border.

“And then you see other members of [the New York] delegation, Jewish members of Congress, that are silent on it and there’s no place for it,” he continued. “After going to Yad Vashem, the fact that we have in the U.S. Congress, openly antisemitic behavior, and then people trying to trivialize the Holocaust… that’s a slippery slope.”

And while the congressional races of 2020 and the mayoral race in 2021 are on the GOP’s agenda, Langworthy said his number one priority is ousting Governor Andrew Cuomo.

“In my statewide portfolio, that is our absolute target number one, and we build every day from now until then,” Langworthy said. “I’ve made it my pledge that every day I go to work will be with the purpose of defeating Andrew Cuomo and changing New York in 2022. I believe the only way to change New York, and roll back a lot of this very negative agenda that’s going on in Albany, is to change governor… Cuomo started out his tenure as a centrist and he just absolutely sold out to the far extreme liberal agenda.”

And the state GOP chairman dismissed the idea that the controversy over Trump’s recent tweets — which were denounced as racist by the House on Tuesday — would affect the party’s success.

“I don’t believe that this tweet from the other day is going to impact the elections in 2020,” he said. “This president has delivered on his promises, just like he has for the U.S.-Israel relationship. And you will see an economic election coming ahead of us. People vote with their pocketbook.”

Langworthy admits there is no chance New York will turn red for the president in 2020, but still considers himself part of the effort to reelect Trump.

“We’re far from a swing state,” he said. “If New York’s in play, then this race is pretty well sewn up. But we’re gonna provide him the support he deserves from his home state, whether it’s raising finances or sending manpower.”