Punches thrown but no knockouts in Miami 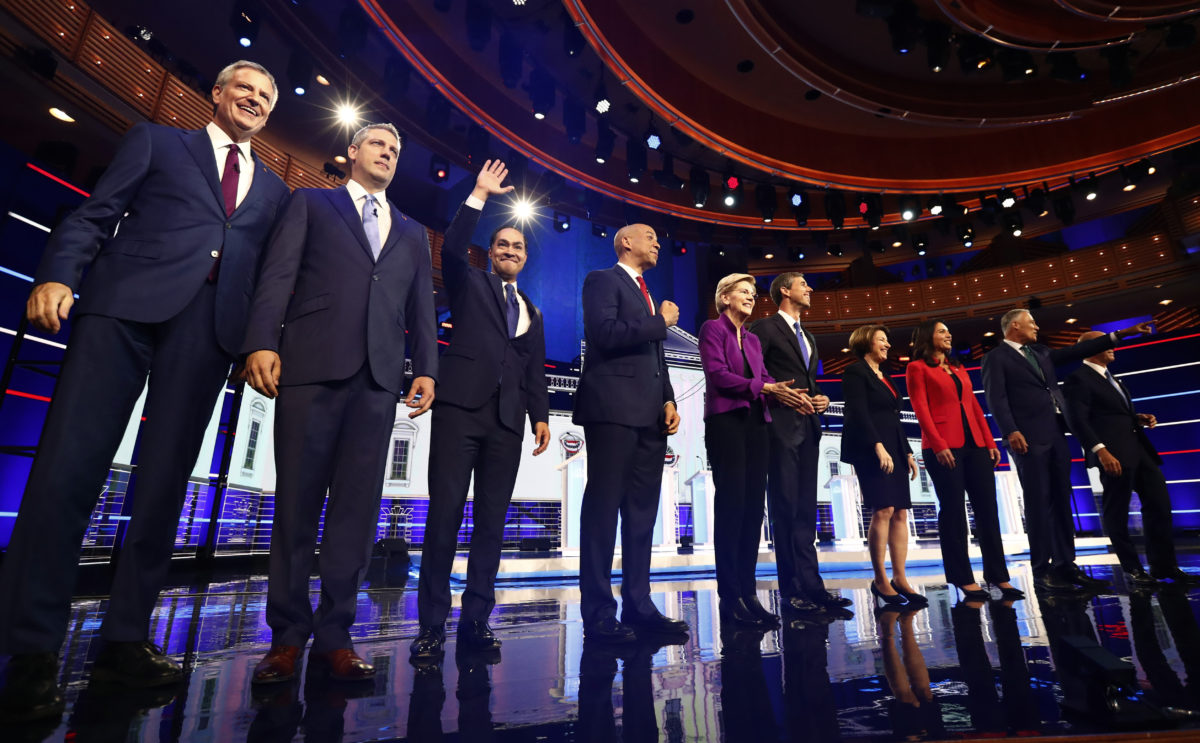 2020 candidates pose for a photo on stage before the start of a Democratic primary debate hosted by NBC News at the Adrienne Arsht Center for the Performing Arts, Wednesday, June 26, 2019, in Miami.

No single candidate will catch fire after the first Democratic debate. On a stage with ten people, it is difficult for any individual to stand out. A number of candidates took advantage of the first opportunity they had to appeal to a national audience, to stand out from a pack of nearly two-dozen rivals.

But, even without the type of defining viral moment that campaigns often dream of but rarely see to fruition, the night may prove pivotal.

For some of the candidates, it provided real opportunity to talk to an audience bigger than cable news loyalists and political junkies. Of those on stage, only Elizabeth Warren was in the top five in polling and few others had much of a national profile.

Former HUD secretary Julian Castro captured attention with remarks on the ongoing humanitarian crisis on the southern border and the need for overhaul of immigration laws. Castro sounded impassioned on the biggest issue of the day and was able to distinguish himself from the pack.

New York mayor Bill de Blasio had a strong performance. Although de Blasio has been slammed as a punchline by a national press that has long followed his tenure in city hall in detail, he spoke to an audience tonight that doesn’t commute on the subway or make jokes about groundhogs. Instead, de Blasio was able to give an unvarnished progressive message while taking shots at former Texas congressman Beto O’Rourke.

Among the candidates closer to the center stage, O’Rourke took an array of attacks while both Massachusetts Senator Elizabeth Warren and New Jersey Senator Cory Booker turned in solid performances. Warren raised eyebrows by endorsing an end to private health insurance in the United States early in the debate and emphasized elements of her stump speech about economic fairness. She was the only top-tier candidate on stage and managed to make it through the two hours without taking a direct hit. Booker, too, had a good night. The New Jersey Democrat had been touted early but had yet to enjoy a moment in the spotlight. Booker had a strong night and may have moved towards a potential breakthrough as he was able to introduce familiar lines from the stump about his inner city neighborhood in passionate arguments on gun control and immigration.

Perhaps one of the most distinctive performances of the evening came from former Maryland Congressman John Delaney who tried to push his moderate brand of politics on the rare occasion he got to speak and fought for every moment of airtime he could like a dog for a bone. It certainly raised the name ID of the former congressman who announced his presidential campaign two years ago and has been stumping Iowa and New Hampshire ever since.

The other unique performance came from Congresswoman Tulsi Gabbard who emphasized her more dovish, isolationist foreign policy. Gabbard’s views on foreign policy have long made her an outlier in the Washington debate but they appeal to an ardent minority that helped elevate Ron Paul’s long shot candidacy in the GOP in 2008.

The challenge now for campaigns is how they leverage their performance tonight. Even after the conventional wisdom congeals, campaigns will have positive moments from tonight as a fundraising tool with an end of quarter deadline only days away and as laurels to be touted in cable news hits and stump speeches.

For at least one, it’s likely to spark new momentum in a campaign that has still barely started. But for the rest, it all may be for naught. After all, another ten candidates will take the stage tomorrow and almost everything that happened tonight is likely to be swiftly forgotten even if that rare viral moment actually doesn’t occur.