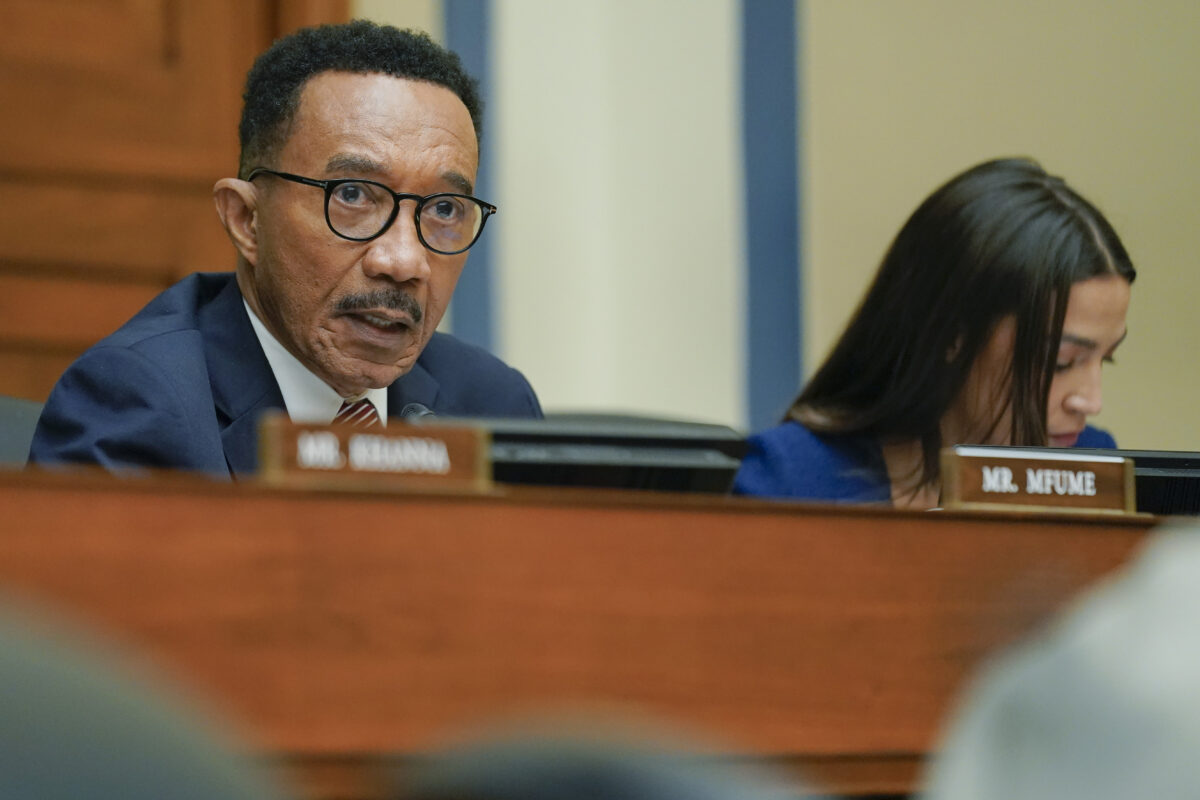 Rep. Kweisi Mfume (D-MD) speaks during a House Committee on Oversight and Reform hearing on gun violence on Capitol Hill on June 8, 2022, in Washington, D.C.

Reps. Mike Quigley (D-IL), Pat Ryan (D-NY), Kweisi Mfume (D-MD), Yvette Clarke (D-NY) and Marc Veasey (D-TX) — none of whom are Jewish — spoke at the forum, which was organized by lobbyist Ezra Friedlander and hosted by the office of Rep. Debbie Wasserman Schultz (D-FL).  The discussion was moderated by New York-based activist Leon Goldenberg and Martin Korčok, a member of the Slovak delegation to the International Holocaust Remembrance Alliance. Aaron Keyak, the State Department’s deputy special envoy to monitor and combat antisemitism, was also present.

Ryan, whose wife and two children are Jewish, described the concern he feels for his children, saying that “we can… leave no corner for these forces to continue to rear their ugly heads.”

“A week ago, we commemorated the 82nd anniversary of Kristallnacht and the terror and horror that followed it,” Ryan said. “The fact that my two Jewish children would be under that same threat and that same risk as we see these forces building is just absolutely outrageous.”

Ryan, who represents a district in the Hudson Valley, also recounted his experience dealing with antisemitic vandalism incidents at Jewish summer camps during his time as Ulster County executive.

“We aggressively addressed it, called it out for the vile nature that it was, and made sure that we did the work afterwards to make the whole community aware that this is happening in our own backyard, and we have to address it and call it out,” Ryan said. “So that is something that I think is on every single elected official, every level and every community leader.”

Ryan, a veteran and the newest member of the House Armed Services Committee, said that there are “multiple important amendments” to the upcoming National Defense Authorization Act that would “ensure that we’re addressing and calling out the rise of antisemitism and violent extremism around the globe and acting and responding appropriately.”

Mfume shared a personal story he tells frequently, describing when he first learned about the Holocaust at age 15 from a neighbor in whose grocery store he worked. The man had survived the Holocaust.

“[He] was sitting there crying,” Mfume said, “He said, ‘Come here, I want you to sit down’… I’d never seen his arms before, but he had his shirt sleeves rolled up and I saw all these markings on both of his arms.”

“And he told me how he had been in a concentration camp, how he had lost contact with his other family members, how he never thought that he would ever live to see another day, and how now he was in that room, but that he thought he had an obligation to tell the story,” Mfume said. “And he said, ‘As long as you are alive, I want you to know the story, so that you might tell it so you might understand my pain.’”

Mfume said he saw an “instant nexus” between his neighbor’s experience and the Black American experience of slavery.

The Baltimore congressman and former NAACP president also reflected on his first visit to Auschwitz as a member of Congress.

“That’s when it hit me in a real, real way,” Mfume said. “Because when you get off of the bus, and you see that great big archway, and you understand how many people went through there, or went off the rails, where the trains pulled up, and you go in, and you see those cabinets, all of that shaved hair, those shoes that used to belong to somebody that are dusty and brown and in a cabinet… It hits you in a different way.”

Walking through the former concentration camp and connecting the experience to the stories he had heard from his neighbor, Mfume said that he “knew more than anything else that there’s got to be a way to prevent that sort of thing from happening… we have to be ever-vigilant in pushing back those forces of evil.”

Mfume said that for decades he has been calling out antisemitism and all forms of bigotry in speeches in a variety of forums.

Veasey said that it is “very disturbing” that “there are people that only feel comfortable talking about antisemitism when it’s politically convenient for them,” raising concerns about antisemitism on college campuses and in debates around Israel policy.

He also said that his family was friendly with that of Rabbi Charlie Cytron-Walker — whose congregation in Colleyville, Texas, was the site of an 11-hour hostage standoff in January — and that their children had played together at McDonalds.

The Texas congressman said he used that incident, as well as the recent “terrible comments” by Kanye West and Kyrie Irving, to discuss antisemitism with his son.

“A lot of people still don’t know what antisemitism is,” he lamented, describing a recent interaction on social media with someone who was unsure what antisemitism was. “A lot of people were coming up with a lot of — I hate to say it — but a lot of uneducated answers, ‘Oh, it’s just hate,’ ‘It’s just stupid,’ ‘It’s terrible,’ not really knowing what the origins of antisemitism [are],” specifically its origins in conspiracy theories about Jewish control.

“We all need to be united against this sort of evil, because we understand that antisemitism is often a precursor — historically — a rise in antisemitism and antisemitic conspiracy theory precedes a nation’s descent into autocracy,” Quigley said.

He noted that antisemitism has become an increasingly frequent issue in the Chicago area.

“[Fighting antisemitism] can’t be a single day, a single event,” he said. “It must be embedded in what we do on an ongoing basis.”

Clarke, who represents a Brooklyn district with a sizable Jewish population, described antisemitism as an “unrelenting and undeniable crisis in America and quite frankly, around the world.”

“It’s a real harm to innocent Jewish people due to the steady drumbeat of rhetoric that is weaponized and targeted at the Jewish people with reckless abandon and malicious intent,” she continued, lamenting the “growing normalization of hatred against Jewish communities” and its increasing presence in public discourse.

Clarke referenced her efforts to reform social media to crack down on hate, and also encouraged “people of goodwill to really work against those who use social media platforms to spew hatred,” pushing back on public platforms and working to “undermine” forums that operate on the dark web.

“I’ve been working with CISA, which is our agency that deals with cybersecurity, on how we deal with disinformation, discredit bigotry, discredit of hatred and the weaponization of that,” she said. “It would work with any nation who is interested in building up their defenses online to have one true fact checker. You need to build a bench, you need to make it a profession. So we need to recruit and hire young people that can help to continue to fight this.”