How the Arab vote could make or break Israel’s election

Arab Israeli citizens are feeling more marginalized and frustrated than ever in this election, but if they stay home they could hand former Prime Minister Benjamin Netanyahu a victory 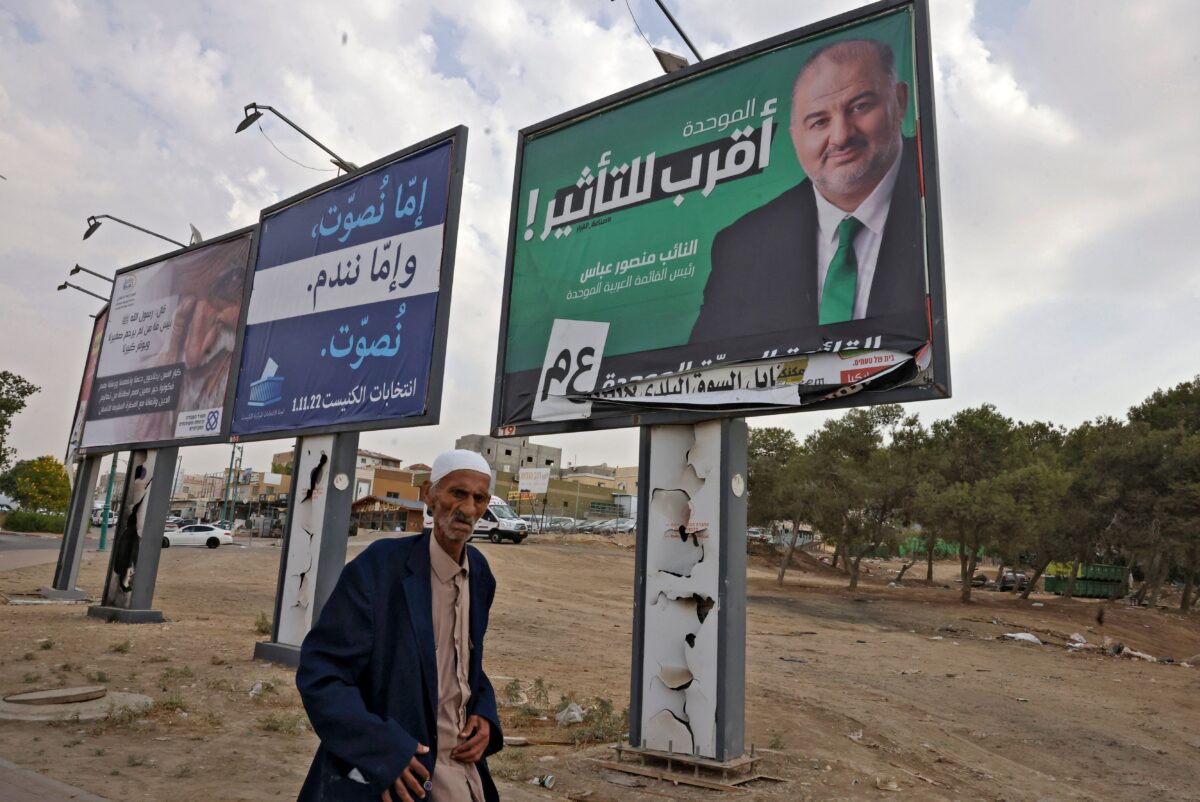 Electoral banners of Arab Israeli parties stand in the Bedouin city of Rahat near the southern Israeli city of Beersheva, on October 25, 2022, ahead of Israel's November 1 election.

RAHAT, Israel – At one of the main entrances to this dusty, sprawling city in southern Israel, among the assortment of already fading election campaign banners, hangs one displaying the stern face of Avi Maoz, leader of the far-right Noam party, a religious Jewish group.

The poster, a clear anomaly in Israel’s largest Arab, predominantly Bedouin, city, might have been strung up there by mistake, or as a joke, a taunt or even a warning. Whatever the reason, the presence of the poster – set amidst those of various Arab parties and candidates – is symbolic of the confusion facing an already dejected group of Israeli voters, who may unwittingly end up being the deciding factor in the Nov. 1 election.

“People here are very disappointed with all the [Arab] political parties and leaders,” Talal Alkinawi, who heads the local branch of the far-left Balad (National Democratic Assembly) Party in Rahat, told Jewish Insider in an interview last week.

Political pundits have been warning for months that the marginalization of Arab citizens of Israel, who make up roughly 20 percent of the country’s 9.3 million population, mixed with the fact that their political leadership is bitterly divided, has left them disillusioned and adrift in an already polarized and fragmented political system.

Add to that the possibility of extreme right-wing Jewish parties, such as Noam, which have done little to hide their contempt for the Arab population, ending up in the government, and the expectation is the Arabs are less likely to vote in this election, Israel’s fifth in less than four years.

“Arab-Israeli voters will make or break this election,” Neri Zilber, a Tel Aviv-based journalist and advisor to Israel Policy Forum, told JI. “Their overall turnout, which is expected to be quite low – and it remains to be seen exactly how low – and how those votes will be divided between the three Arab parties will be critical.”

“At least one Arab party is unlikely to make it over the [electoral] threshold and the two others are also in danger,” he explained. “There is also a chance, although maybe less likely, that no Arab party will make it and Arab Israelis could end up with zero representation in the Knesset, and that would be a fatal blow to the anti-Netanyahu camp.”

According to polls taken Friday, the last batch ahead of Tuesday’s election, only two of the three Arab parties will make it into the Knesset. Israel’s Channel 12 News estimates that both Ra’am (the United Arab List), an Islamist party headed by Mansour Abbas, and Hadash-Ta’al (The Democratic Front for Peace and Equality), led by Ayman Odeh and Ahmad Tibi, will draw four seats each, while Balad fails to reach the requisite 3.25 percent of the overall vote needed to pass the threshold. Last week’s polls are in line with previous surveys that showed similar results.

If proved true, or if any one of the other smaller parties fails to pass the threshold, then the outcome of Tuesday’s vote could change drastically. In that scenario, Opposition Leader and former Prime Minister Benjamin Netanyahu, and the right-wing parties that support him, would get the boost they need to return to power and even establish a long-term stable government.

“I am very worried about what will happen inside Israel if there is such a change in the government on November 2,” said Michael Milshtein, head of the Palestinian Studies Forum at the Dayan Center in Tel Aviv University.

“Israel will turn into a ticking time bomb – it will only be a matter of time before there is an explosion between Israel’s Jewish and Arab communities,” he continued, highlighting the violent clashes between Jews and Arabs that took place in mixed cities in May 2021 during Israel’s weeklong war with Hamas in Gaza.

“The clashes and main events from that time are an open story,” Milshtein added. “It’s a volcano waiting to explode again.”

Surveys carried out by both the Dayan Center and the Israel Democracy Institute (IDI) over the past few weeks show that voter turnout among the Arab population might fall below 50 percent, a dramatic drop from the more than 60% that cast their votes two years ago.

Muhammed Khalaily, a researcher at the IDI who carried out the study, explained that the dramatic fall has been caused by several factors, including disputes among the various Arab parties, which until two years ago were united under the banner of the Joint Arab List.

“The people are disappointed and believe the politicians are not paying attention to the electorate, who want them to be united, or at least work together,” said Khalaily.

He said that following the last election, when Abbas decided to break with the tradition of Arab parties and back the coalition government that was forming (then led by former Prime Minister Naftali Bennett), there was hope he would bring real change for the community, especially in tackling rising violent crime, updating infrastructure and building new homes.

“People listened to his speeches and his promises to make changes in the community, but most people say this did not happen and at the end of the day, they do not feel there was enough movement or changes for them,” Khalaily observed. “The public is very disappointed.”

“There’s no ideological boycott; it is more about disappointment and frustration at the politicians and the political system,” concurred Milshtein, adding that while Abbas’ decision to join an Israeli government was historic, he did not reduce violent crime or secure significant budgets that could bring real change or impact cities such as Rahat.

In the Bedouin city of some 80,000 residents – making it one of the largest Bedouin cities in the entire Middle East – Talal said that many people felt Abbas turned his back on his community after last year’s election.

“We are disappointed with Abbas,” he told JI. “We thought Ra’am would bring change but he did nothing for the Arabs. I am not against helping other communities, but he did more for the ultra-Orthodox than for the people who voted for him.”

“We want to be part of this country and we want our rights as citizens,” Alkinawi, who hails from one of the largest Bedouin tribes in Rahat, continued. “That is why I will support Balad. They want a country where everyone is equal.”

Rahat’s mayor, Faiz Abu Sehban, disagrees. He said the only way to make changes in his city, as well as in the broader Arab community, is to continue with Abbas’ trajectory of working within Israel’s political system and supporting whichever government is in power.

“Abbas did something good for the Arab community,” he said. “We want to have influence and make a change. What is the point in voting if you are not going to be included in the decision-making and have no influence?”