The Turkish president made the pledge during a closed-door event in New York, organized by the Conference of Presidents of Major American Jewish Organizations 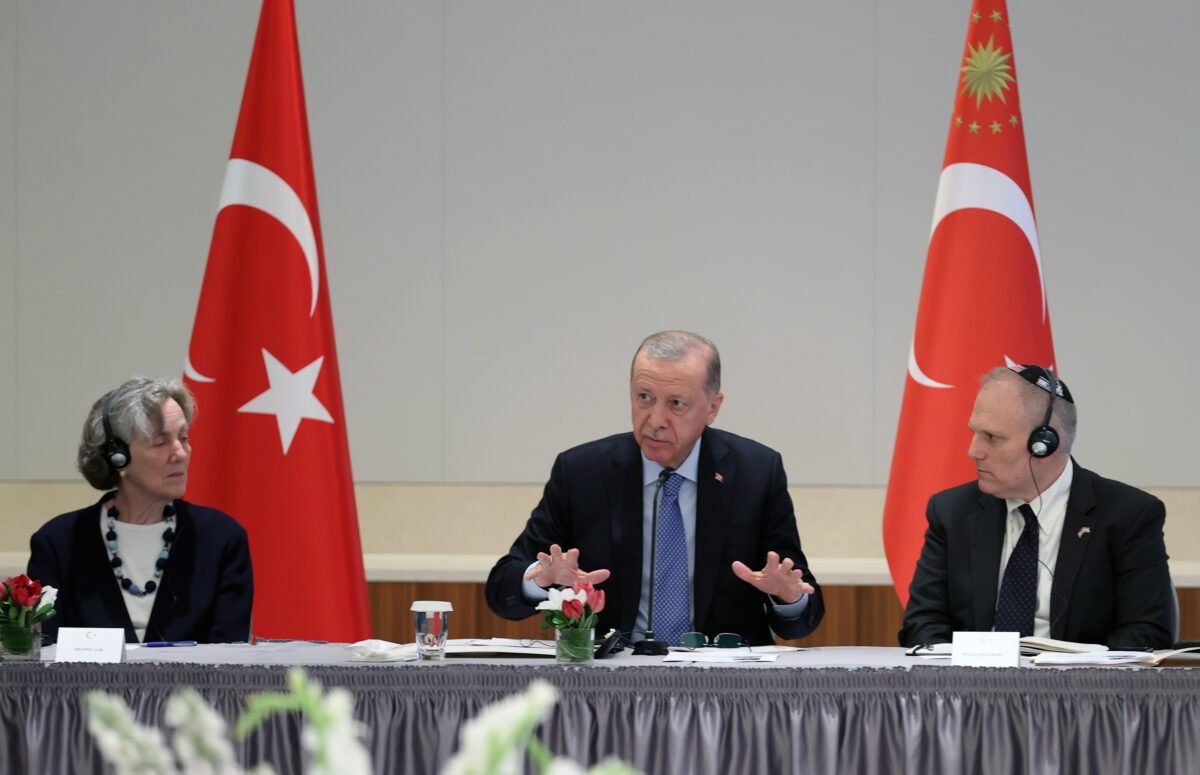 Speaking to American Jewish leaders on Monday in New York City, Turkish President Recep Tayyip Erdogan said he would visit Israel, in a closed-door announcement that comes just over a month after Turkey and Israel announced a restoration of full diplomatic ties.

The Turkish president, who is in New York this week for the annual gathering of the United Nations General Assembly, made the pledge during an hour-long meeting with Jewish leaders held at the Turkish mission to the U.N. in Manhattan, according to an attendee who spoke with Jewish Insider on Monday evening. The event was organized by the Conference of Presidents of Major American Jewish Organizations.

Erdogan did not disclose when he planned to travel to Israel. Instead, he said he first wanted “several” of his own ministers to go before him to lay the groundwork for a visit, according to the attendee, who requested anonymity to discuss the off-the-record meeting. “Then he said it would be appropriate for him to go,” the participant recalled.

The announcement — details of which were first reported by the Jewish Telegraphic Agency — comes amid a renewed warming of relations between Turkey and Israel, which had essentially been frozen since 2010, when Israeli security forces carried out a deadly raid on a Turkish aid flotilla heading for Gaza.

But in recent months, Turkey has pursued a friendlier relationship with Israel as Erdogan seeks to stave off an economic crisis ahead of next year’s presidential elections. Israel, for its part, has expanded ties with several Muslim-majority countries in the region thanks to the Abraham Accords, which recently celebrated its second anniversary.

In March, Israeli President Isaac Herzog traveled to Turkey, marking the first visit to Ankara by an Israeli leader in 14 years.

During the conversation with Jewish leaders on Monday, Erdogan, who was accompanied by about half a dozen ministers, “spoke very warmly of his meeting with Herzog,” the attendee told JI.

The Turkish president delivered opening remarks, which the participant described as “conciliatory,” and said “there is no justification for antisemitism at all.” Erdogan claimed to have “fought” antisemitism at home.

For most of the talk, Erdogan fielded questions from Jewish leaders, who asked, among other things, about Turkey’s connections with Hamas, which remains a presence in Turkey.

One participant raised concerns that there are photos of Erdogan meeting with Hamas officials, according to the attendee. In response, Erdogan said he is “open to talking to” Hamas “to keep channels open,” the attendee told JI. “He said you have to talk to everybody but it’s on his terms.”

Erdogan did not address the Iran nuclear deal but did touch on other “sensitive subjects,” according to the attendee. “He says what he wants to say,” the attendee said of Erdogan. “He won’t say more than that.”