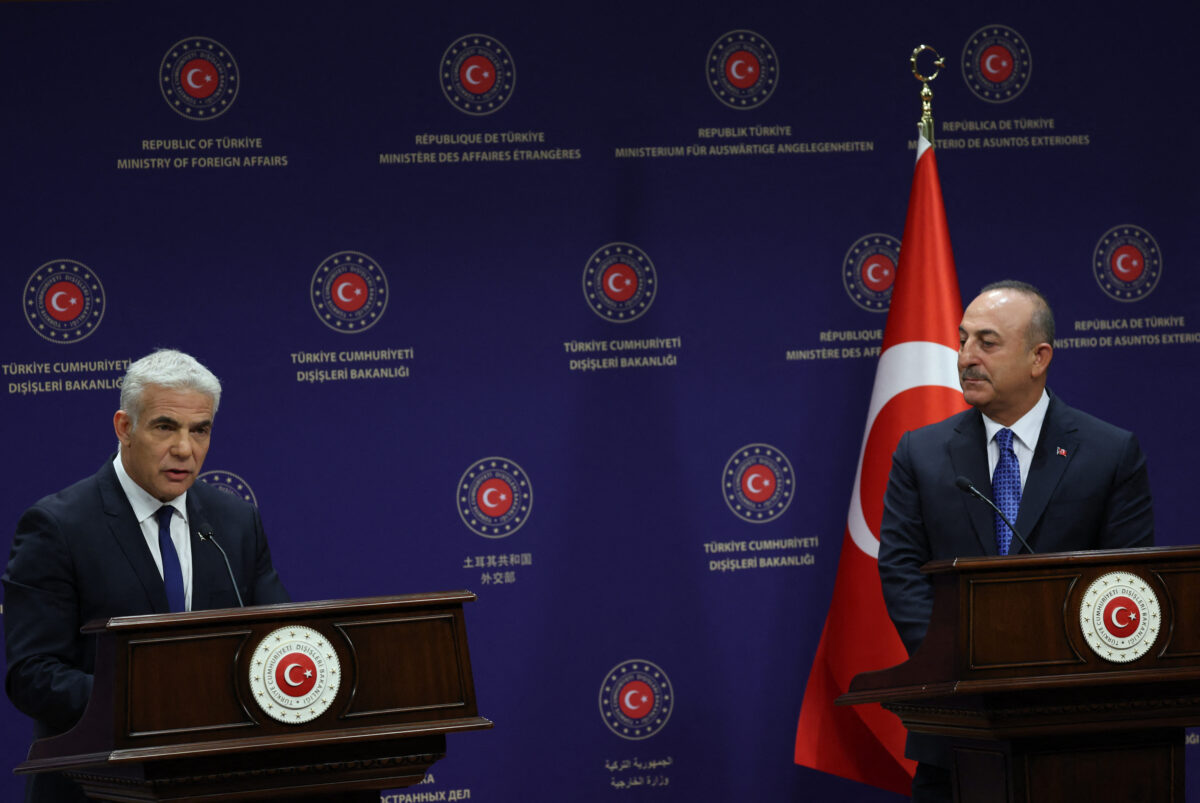 The diplomatic thaw between Israel and Turkey that has taken place over the last year intensified on Wednesday as the two countries announced a full restoration of ties.

Israeli Prime Minister Yair Lapid and Turkish President Recep Tayyip Erdogan spoke by phone Wednesday after the announcement of the restored ties was made. According to a Turkish press release, Erdogan “expressed his pleasure over the advancement of the relations.” The two leaders “ag​​reed that this latest development is an important additional level in the strengthening of relations that will lead to many achievements, especially in the fields of commerce and tourism,” according to an Israeli statement. Israel and Turkey will exchange ambassadors and consuls general.

In March, Israeli President Isaac Herzog visited Turkey — the first visit by an Israeli leader to the country in 14 years — and met with Erdogan, who has been eager in recent months to improve Turkey’s global standing amid an economic crisis at home and ahead of elections in the country next year.

“It’s not an isolated development. It is Ankara’s latest move to overcome its isolation in the Middle East. Over the last year, Turkey has been trying to mend its relations with Egypt, Saudi Arabia and the United Arab Emirates,” said Aykan Erdemir, director of international affairs research at the Anti-Defamation League and a former Turkish lawmaker. “This definitely is a significant move.”

Ankara’s quest to forge better relations in the Middle East coincides with a desire for closer ties with the U.S., although Washington does not appear to have played a role in the mending of ties between Israel and Turkey. A State Department spokesperson praised the development in a statement to Jewish Insider.

“We welcome and fully support the announcement of full normalization of relations between Turkey and Israel,” the spokesperson said.

The way Turkey hopes to leverage this development to strengthen its standing in Washington, observers say, appears to be based at least in part on an assumption by Ankara that the news will be received positively in the American Jewish community — and that influential Jewish leaders may go to bat for Turkey with U.S. government officials.

“For Turkey, this really has less to do with Israel,” said Steven Cook, the Eni Enrico Mattei senior fellow for Middle East and Africa at the Council on Foreign Relations. “It has more to do with what Turkey’s leadership believes will generate goodwill for them in Washington, this kind of thinly veiled Islamist antisemitism, where they think that Jews have this kind of outsized power in Washington and that if they’re nice to Israel, the organized American Jewish community will step up and help Turkey, and advocate for Turkey in Washington, D.C.”

Such a view might be “cynical,” said Jonathan Schanzer, senior vice president for research at the Foundation for Defense of Democracies. But, he added, “I believe that as the Erdogan government looks to potentially reset some of its ties with the United States, it believes that Jewish power could help.” That view “at its core,” said Schanzer, “is, I think, antisemitic.”

Wednesday’s announcement comes nearly two years after the signing of the Abraham Accords, which normalized ties between Israel, the United Arab Emirates and Bahrain. But unlike those Gulf nations, with which Israel had never before had diplomatic relations, Turkey has a long history with Israel.

Turkey was the first Muslim-majority nation to recognize the State of Israel, and the countries had strong security coordination until the early 2000s. A major diplomatic rift took place in 2010 after Israeli security forces raided a Turkish flotilla bound for Gaza, and nine people were killed in the ensuing confrontation. In 2018, after the countries attempted to mend ties, Turkey expelled the Israeli ambassador from Ankara after the U.S. moved its embassy in Israel to Jerusalem.

But even after these incidents, when relations were at a low, both Israel and Turkey retained diplomatic presences in the other country. In May, Turkish and Israeli security agencies coordinated to foil an Iranian plot to kidnap Israeli tourists in Turkey.

Economic and tourism ties have also flourished despite the diplomatic spat. Last year, trade between the nations surpassed $8 billion, and Turkish Airlines is the third-largest airline operating in Israel.

“It was an interesting compartmentalization,” said Erdemir. “On the one hand, there was a near-total halting of Turkish-Israeli diplomatic, military ties and intelligence cooperation. On the other hand, economic and people-to-people ties continued to flourish. But still, there is a lot of room for relations to rebound from their historic lows.”

This entire framework for Israel’s relationship with Turkey “is radically different from the Abraham Accords process,” Erdemir added.

Turkey also has a strong history of advocating for Palestinians and criticizing Israel for its security strategy, and Turkish Foreign Minister Mevlut Cavusoglu told reporters on Wednesday that Ankara pledged to continue to defend Palestinian rights. Earlier this month, during the brief violent flare-up in the Gaza Strip, Erdogan accused Israel of “killing children and babies.”

“Bottom line is, there are a lot of questions that remain now about the intent of the Turkish government, and how sustainable an agreement like this can be,” said Schanzer.

Hamas has maintained a strong presence in Turkey for years, especially since Israel swapped more than 1,000 Palestinian prisoners — many of whom went to Turkey — in exchange for the return of captive Israeli soldier Gilad Shalit. It’s not clear whether the resumption of ties between Israel and Turkey means Turkey will try to tamp down on the Hamas presence in the country.

Turkey’s strong alignment with the Palestinians, and Erdogan’s willingness to attack Israel as recently as last week, might also mean it could be easy to again shut down the relationship.

“To the extent the Israelis [attack] Gaza, it’s just easy to throw out the Israeli ambassador,” said Cook, who said he was surprised that Israel’s leaders have been so publicly celebratory. Benny Gantz, Israel’s defense minister, called the restoration of ties a “significant and positive step that will contribute to regional stability.”

“I think the Israelis should probably be more cautious,” Cook added, “because at any given moment, Erdogan can change course and say, you know, he’s got to protect whatever flank and take off on the Israelis.”