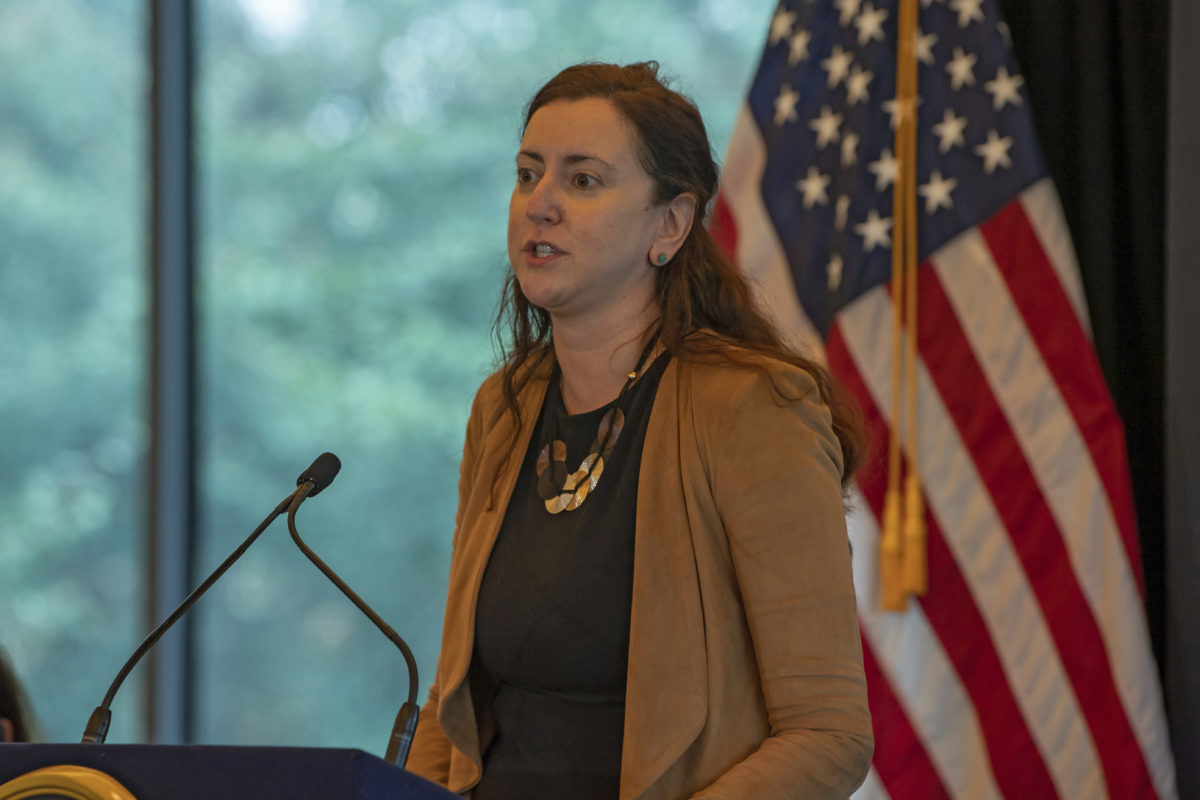 Assembly member Nily Rozic speaks during a press conference at the Museum of Jewish Heritage.

A proposed Holocaust education bill that had been met with fierce resistance from New York state lawmakers last legislative session now appears to be facing renewed  — if somewhat mysterious — opposition in Albany.

Late last week, the bill was removed — with no public explanation — from a detailed list of agenda items that are expected to come up for discussion during a meeting of the state Assembly’s Ways and Means Committee on Monday, according to a Democratic insider who spoke with Jewish Insider on the condition of anonymity.

The original agenda, reviewed by JI, had included the bill near the top of the list when it was distributed on Friday afternoon. But just over an hour later, the list was summarily replaced with a “revised” agenda — and the Holocaust bill was nowhere to be found.

The bill appears to be the only item that was excluded from the new agenda.

It is yet another curious development for the seemingly benign legislation, which — despite persistent efforts to stymie its path to a floor vote — has garnered widespread bipartisan support since its introduction to the Assembly in 2021.

The bill, which is sponsored by Democratic Assemblywoman Nily Rozic, would direct New York’s education commissioner to conduct a study verifying whether public school teachers are educating students about the Holocaust.

The legislation would also require that the education commissioner provide specific recommendations to ensure that the Holocaust is taught in public schools throughout the state.

Those who support the bill have argued that it will serve as a useful corrective amid a recent uptick in antisemitic violence as well as reports that young American adults are uninformed about the Holocaust.

But the legislation was nearly quashed last spring when it came up for a vote during a virtual meeting of the state Assembly’s Education Committee. Michael Benedetto, a Bronx Democrat who chairs the committee, had attempted to block the bill from advancing to the floor, arguing that the legislation was redundant because Holocaust instruction is already required by state law.

“I understand the fear that is in people’s hearts,” Benedetto said at the time, according to a recording obtained by JI. “I certainly worry about what’s being taught in our schools, but I also have confidence in our teachers that they know what’s going on.”

In a rare rebuke, however, Benedetto’s effort was rejected by a bipartisan majority of committee members who voted against the hold.

While Benedetto acknowledged that the legislation was “well-intentioned” in an interview with JI after the vote, he remained adamant that its requirements were “unreasonable” and “would call for an undue burden on the Department of Education.”

“I don’t want to put them through that,” he said last May.

The bill was directed to Ways and Means, which oversees state budgetary matters, just two weeks before the legislative session concluded last June — and did not come up for a vote.

Rozic, who sits on the Ways and Means Committee, said she was unsure why the bill was removed from the agenda without any apparent explanation but expressed frustration with the last-minute edit.

“It is a shameful truth that Holocaust survivors still have to fight to ensure that their stories are heard and more importantly that students are taught the lessons of the not-so-distant past,” Rozic, who is Jewish, told JI on Sunday. “There’s nothing redundant about that.”

Benedetto, who is also a member of the Ways and Means Committee, did not respond to requests for comment on Sunday.

Neither did Brooklyn Democrat Helene Weinstein, who chairs the committee.

David Weprin, an Orthodox Jewish assemblyman in Queens and a Democrat who sits on Ways and Means, told JI he supports the legislation but is “not familiar with the drama of the agenda.”

The committee is scheduled to discuss the revised agenda on Monday afternoon in a meeting that will be broadcast on the state Assembly’s website.