How a Holocaust education bill stalled in Albany 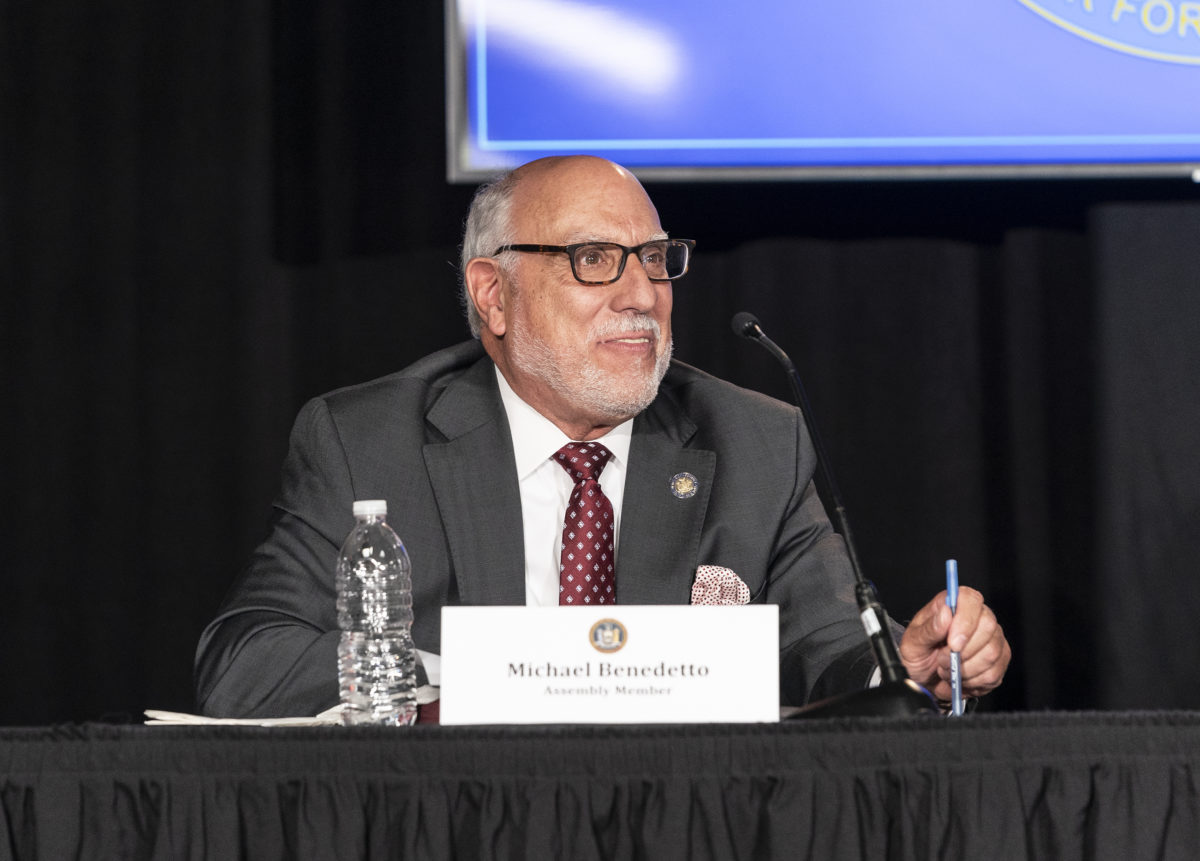 State legislators in New York are divided over the necessity of a proposed bill directing New York’s education commissioner to conduct a thorough study that would help verify whether public school teachers are educating students about the Holocaust.

The unusual dispute culminated on Monday in a virtual meeting of the State Assembly’s education committee, a recording of which was obtained by Jewish Insider, when chairman Michael Benedetto tried to block the seemingly uncontroversial bill from advancing to the floor.

“I understand the fear that is in people’s hearts,” said Benedetto, a Bronx Democrat and former school teacher, after arguing that the legislation was redundant because Holocaust instruction is already required by state law. “I certainly worry about what’s being taught in our schools, but I also have confidence in our teachers that they know what’s going on.”

In a rare rebuke of a sitting chairman, however, Benedetto’s effort to stymie the legislation was thwarted by a majority of committee members — Democrats and Republicans alike — who voted against the hold. “We are in a unique time where we need to do more in addressing the rise of hatred, not just with Jewish Americans,” Queens Democrat Ron Kim said in the meeting, echoing the sentiments of several colleagues who spoke out in favor of a full audit as antisemitic incidents have ticked up in recent weeks.

“Where’s the hatred and violence coming from?” Kim added. “I think, obviously, a lesson around the Holocaust is part of the history that we must dive into in a comprehensive way.”

Even days after the meeting in which Benedetto was overruled, the disagreement remains a polarizing topic, particularly among lawmakers who view the bill as a useful corrective amid reports that young American adults are woefully uninformed about the Holocaust.

Two-thirds of young American adults are unaware that six million Jews were killed in the Holocaust, according to a recent survey commissioned by the Conference on Jewish Material Claims Against Germany. In New York, 58% of respondents were unable to name a concentration camp or ghetto, while a startling 19% of those surveyed in the state believed that Jews caused the Holocaust.

“As we’ve experienced historic levels of antisemitism in New York and around the country over the past few weeks, ‘never again’ needs to be a call to action and not merely a platitude offered on Holocaust Remembrance Day,” Nily Rozic, a Jewish assemblywoman in Queens who sponsored the bill, told JI. “When study after study delineate embarrassing ignorance and misinformation about the Holocaust among New Yorkers, we need to rectify the issue at the source — educational requirements.”

Michael Reilly, a Republican member of the Assembly’s education committee who voted against Benedetto, agreed. “I believe it is appropriate for the legislature to periodically require evaluation of how the laws pertaining to curriculum are transitioning from words on paper to everyday practice,” said Reilly, who represents Staten Island. “Assemblymember Rozic’s legislation could help school districts share best practices in delivering lessons to school communities.”

The legislation would require that New York’s education commissioner put forth specific recommendations based on the study’s findings in order to ensure that the Holocaust is taught in public schools throughout the state.

While the bill was spared for the moment, its fate is still in question as it now appears to be moving to the Assembly’s Ways and Means Committee with just two weeks remaining until the legislative session ends on June 10. The committee’s chair, Brooklyn Democrat Helene Weinstein, did not respond to a request for comment.

William Magnarelli, a Democratic assemblyman in Syracuse who voted with Benedetto in favor of holding the bill and also sits on Ways and Means, said he expected that it would be taken up. “I don’t see why it wouldn’t,” he told JI.

However, Doug Smith, a Republican assemblyman who supports the legislation, is skeptical, and questions why the bill has been redirected to Ways and Means at all when, he says, it will have no financial impact on the state. He suggested that the bill’s winding path to the floor was a delay tactic.

“The Democratic leadership is concerned about members of their party,” he said, speculating that high-ranking Democrats are fearful of some far-left Assembly members publicly opposing the bill at a moment when anti-Israel sentiment seems to have given rise to antisemitic attacks in the wake of recent conflict between Israel and Hamas.

“I represent a district on Long Island and my constituents are very, very concerned about this,” Smith told JI.

Still, Benedetto vociferously defended his effort to quash the bill using the same argument he put forward before he was defied by committee members, even as he acknowledged that Rozic’s legislation was “well-intentioned.”

“What they’re asking for is really unreasonable,” Benedetto said in an interview with JI, sounding somewhat exasperated by the fallout from the meeting. “This would call for an undue burden on the Department of Education, and I don’t want to put them through that.”

But David Bloomfield, a professor of education at Brooklyn College and the CUNY Graduate Center, countered that the proposed study was a worthwhile use of state resources. “I wish the legislature would do this more often,” he said. “The commissioner doesn’t police districts on their adherence to the law, period.”

“Based on the information that Rozic and the others have gathered, it’s apparent that Holocaust studies, as well as the other issues covered in the same law, including slavery and the Irish potato famine and the great documents of American history, are often ignored or given short shrift,” Bloomfield added. “This demonstrates the need for greater initiative on the part of the state education department to monitor and enforce compliance with state law.”

The New York State Department of Education did not respond to a request for comment.

But others are still perplexed by resistance to a bill that was expected by many lawmakers to garner unanimous support.

“I really don’t know why this bill has become an issue,” Anna Kaplan, a Democratic state senator from Long Island who is sponsoring the bill in the upper chamber, told JI. “The premise for this bill was we have all these really disturbing stats showing that the Holocaust is not being taught well. That 11 million people who died, 11 million innocent people who died, are not getting their part in history. That we are not teaching this history to our children correctly.”

“The fact is,” said Kaplan, a Jewish refugee from Iran, “that we all know people who don’t learn from history are doomed to repeat it again.”