An Iranian Jewish writer’s guide to immigrants — for natives 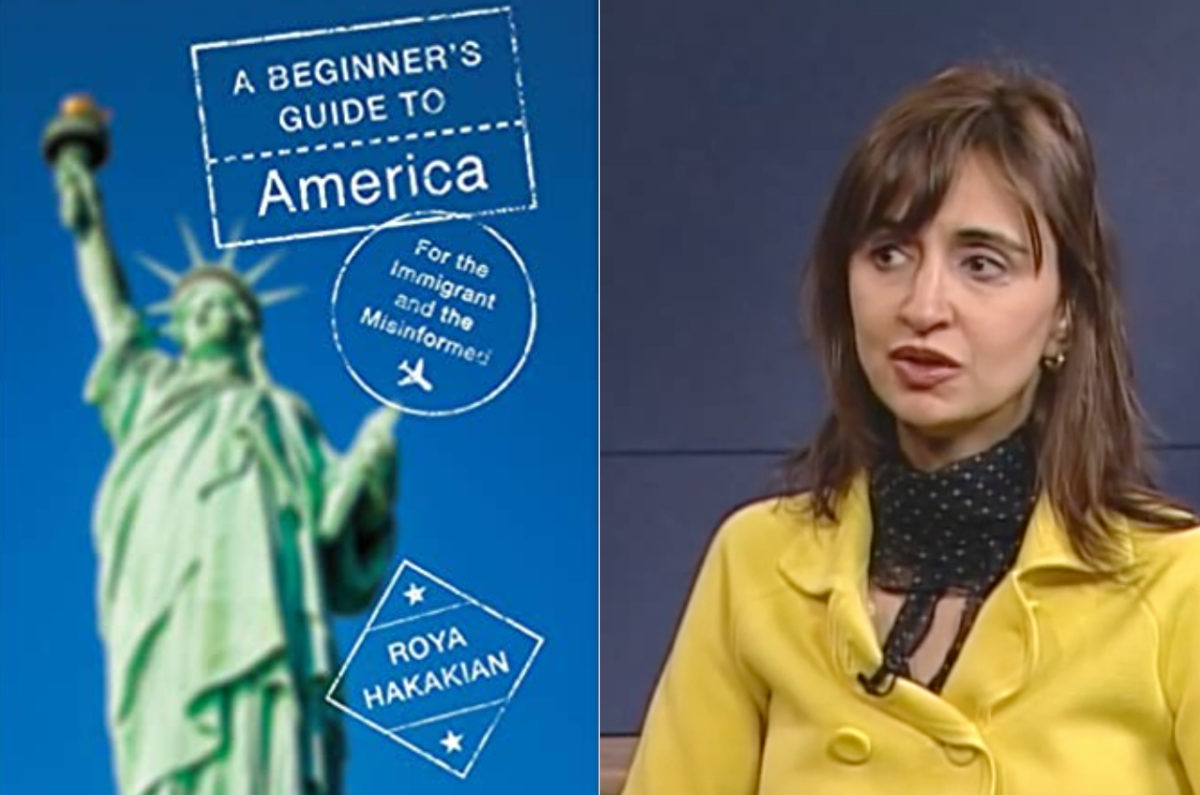 For immigrants and refugees arriving in the U.S., there is no “Welcome to America” guidebook. Even after they have managed the most urgent needs — finding a home, enrolling their children in school — each immigrant must attempt to answer for themselves a very loaded question: What does it mean to become an American?

A new book by Roya Hakakian, who, along with her Persian Jewish family, came to the U.S. from Iran in the 1980s, ostensibly attempts to help immigrants answer that question. In A Beginner’s Guide to America: For the Immigrant and the Curious, Hakakian draws on her own experience as a refugee to inform others embarking on the same journey, at least in theory.

In reality, Hakakian says her desired audience is native-born, English-speaking Americans, who she is urging to confront their biases toward immigrants. “Somebody who’s a newcomer to America can’t pick up a guidebook in English and learn from it. This isn’t really intended for the audience that it proclaims to be intended for,” Hakakian told Jewish Insider in a recent phone interview. “In the title [is] ‘for the curious,’ and I am hoping the curious are the native-born Americans who are interested in the issue of immigrants and immigration.” She wants people who have never before experienced being a foreigner here to imagine: “What do [immigrants] really experience, see, hear, and feel when they arrive?”

Hakakian’s new book, written in the second person, is not a memoir — she already wrote one of those — although she draws heavily from her own experiences. But Hakakian also did not want to write an op-ed, or anything resembling one. “I thought that remaining lighthearted throughout would be a way of hopefully breaking the ice, if there’s any ice between us — which, perhaps since 2016, there has been between the immigrant and the native born,” she said.

A refugee from Iran is different from a Chinese immigrant; an asylum seeker from Mexico is not the same as an Indian in the U.S. on a student visa. But in A Beginner’s Guide to America, Hakakian wants to show readers that these differences are not significant in the broader context of what it means to be an immigrant, or to belong to a nation of immigrants. “There are certain overarching experiences for any immigrant, regardless of where they come from, that make all of us far more similar than they make us different,” said Hakakian.

“Part of what has really poisoned our national conversation about immigrants and immigration,” Hakakian argued, “is that scientists or sociologists or policymakers have so focused on the specifics of each immigrant community — the Cubans, the Indians, the Chinese, the Polish — and trying to create data about the pros and cons of each one of these communities coming to the United States.”

At various points in its history, Hakakian pointed out, the U.S. has explicitly restricted immigration by national origin or ethnicity. But in her view, more than 200 years of history show a nation that has accepted newcomers from all around the world, and “that has enabled us to do and think and see things in ways that a more homogenous people can’t.”

In recounting her family’s immigration story to JI, she said she hadn’t wanted to leave Iran, despite understanding the 1979 Islamic Revolution had made the state oppressive and authoritarian.

“Despite all the bad that was going on, I really didn’t think that leaving was the answer,” Hakakian said. As a teenager, she added, “you develop a lot of attachments,” and the Iranian Jewish community had encouraged her as a young writer. Leaving her life behind did not seem like the answer to the country’s turn toward repression.

Her brothers had gone to the U.S. in the 1970s as students, not refugees. They lived in America through the early years of the Ayatollah’s regime, while Hakakian and her parents remained in Iran, even as most other members of the Iranian Jewish community fled.

Hakakian’s father was the principal at a Hebrew day school, making leaving even more difficult. But then Iraq invaded Iran, and Hakakian’s brothers, if they returned, would have been drafted to the military. “It also became very clear that Iran was heading in a direction of bad economy [and] poor governance, and the future wasn’t looking bright,” Hakakian said.

In 1984, she and her mother joined her brothers in the U.S. “My father kept hoping that the political situation would change and my brothers would return, but after five years, when it became very clear that it wouldn’t, then we decided to meet,” she recounted.

Unlike many refugees, Hakakian and her family did not move to an area with other people from their home country. Instead, they wound up in Borough Park, a Brooklyn neighborhood with a large Hasidic population that in some ways reminded her of the country she had left. “I had run away from a religious state,” Hakakian explained, leaving behind the “pressure of, ‘You can wear this and you can’t wear that,’ and ‘You can do this as a woman and you can’t do that.’”

Back in Iran, her family had been religiously observant, but not to the extent as the members of Borough Park’s Hasidic community. “As soon as we moved in, one of the very first things I was told was, ‘You can’t carry a bag or anything on Shabbat,’ [and] ‘You cannot wear pants,’” Hakakian said. “I couldn’t believe my ears. I had such a hard time with all that.”

Still, Hakakian stayed close to the Jewish community. She told JI that she finally began to feel like an American when she enrolled at Stern College at Yeshiva University and moved across the East River to Manhattan.

Hakakian now lives outside of New Haven, Conn., in an area with few other Iranians. But she closely follows politics in her home country and writes frequently about Iran, particularly on women’s rights and the country’s mandate that women wear the hijab. “The way we exercise our heritage is by keeping in touch, especially now through social media,” Hakakian explained. “I have [almost] 10,000 followers on Facebook, and I would dare say half of them live in Iran.”