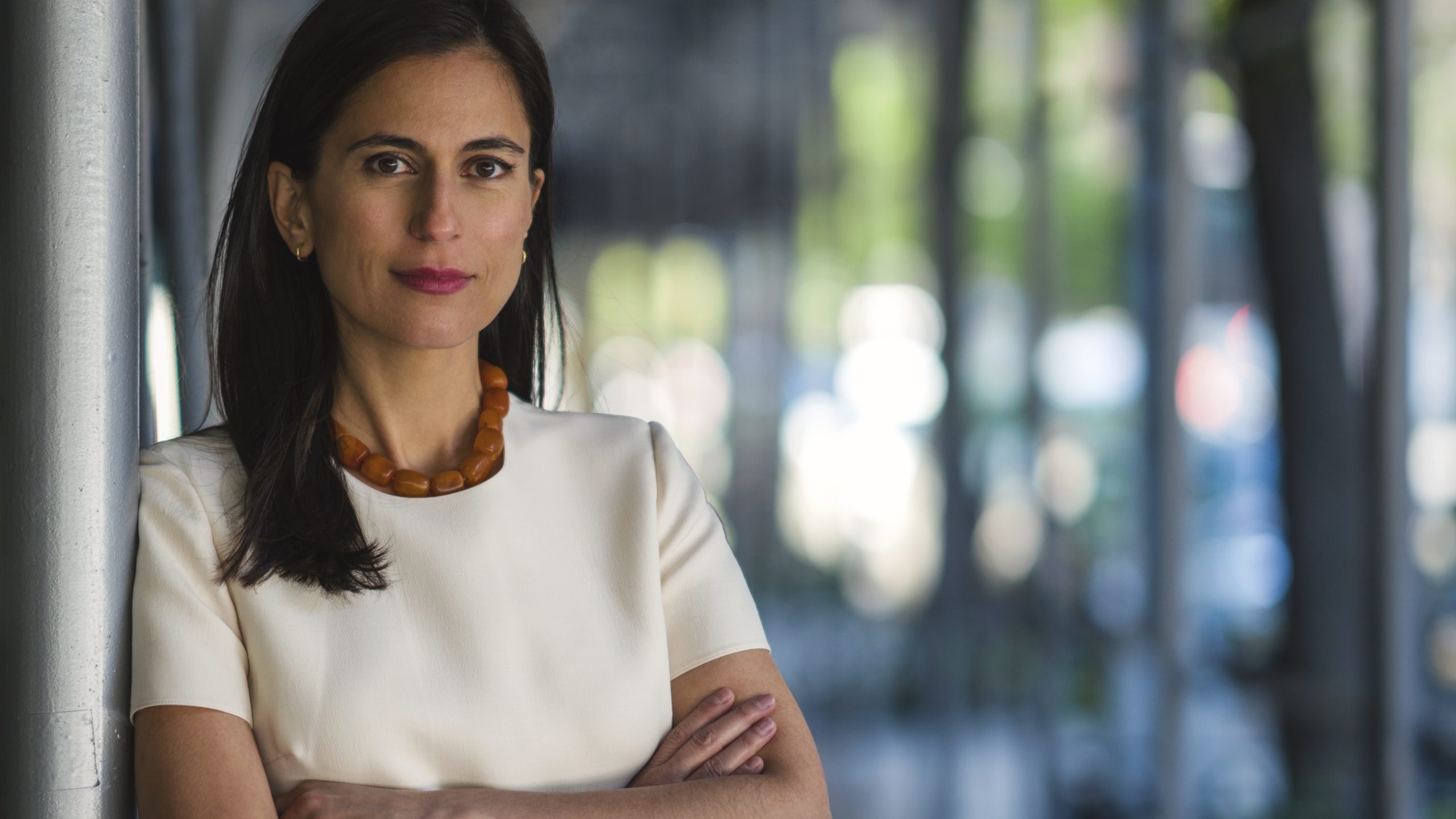 On a bright Thursday morning in Manhattan’s Tompkins Square Park, Tali Farhadian Weinstein, the former general counsel to the Brooklyn district attorney’s office, didn’t immediately notice Rep. Carolyn B. Maloney (D-NY) walking by. The mask-clad Maloney was strolling through with an assemblyman and a district leader in tow, handing out personal protective equipment to constituents in the East Village, when Farhadian Weinstein’s communications aide whispered that the congresswoman was right in front of her.

“I didn’t recognize you!” Farhadian Weinstein exclaimed apologetically, jumping up from her bench conversation with Jewish Insider to exchange a few pleasantries, as well as an elbow bump, with her local representative. “You look beautiful,” Maloney replied.

The chance encounter — as well as their sense of camaraderie — felt fortuitous as Maloney hopes to have fended off a formidable challenger in New York’s recent June 23 Democratic primary (where not all votes have been counted), while Farhadian Weinstein has just embarked on a political venture of her own as she mounts a bid for Manhattan district attorney — her first foray into campaign politics.

Farhadian Weinstein, who announced her candidacy on Monday, is entering a crowded field to challenge the current DA, Cyrus Vance, Jr. — who has yet to indicate whether he will run for reelection. Her decision to run amid a pandemic presents a number of obstacles given that candidates can’t engage in traditional, in-person campaigning in an age of social distancing.

“It’s been a digital campaign, obviously,” said Farhadian Weinstein. “I launched it from my apartment.”

But Farhadian Weinstein believes this moment is as opportune a time as any — if not more so — to jump into the fray. “Why not now?” she told JI during the socially distanced interview Thursday morning while police sirens chirped in the background. “I mean, we’re actually engaged in a really robust conversation, I think, about what fairness and safety are supposed to look like, and this campaign is about being a part of that conversation.”

The 44-year-old lawyer, who recently left her position in the Brooklyn DA’s office, said she has been contemplating running for some time. “It’s not like a switch flips,” she said. “It’s a gradual process and really an extension of my life’s work.”

Farhadian Weinstein’s life story is compelling, and one which could serve her well on the stump. A Persian Jew born in the Iranian capital of Tehran, she fled the Islamic Republic with her family at the age of four just before the Ayatollah Ruhollah Khomeini returned from 15 years of exile to consolidate power in the wake of the Iranian Revolution in 1979. After a 10-month sojourn in Israel, where Farhadian Weinstein’s parents attended university, the family settled first in New York and then northern New Jersey.

At first, Farhadian Weinstein struggled to fit in as an immigrant in a foreign land. “I do remember how disorienting it was to not understand what people were saying,” she recalled. “For any immigrant, that’s just a kind of shock. It’s like turning the TV to a different station in a different language.”

Ultimately, she learned to assimilate as a Mizrahi Jew into the predominantly Ashkenazi populace of Englewood Cliffs, but still maintained aspects of her core identity.

“There were never more than a handful of us, and we had our traditions,” said Farhadian Weinstein, who attended yeshiva day school at the Moriah and Frisch academies but notes that her family wasn’t strictly Orthodox. “We had our own nusach — actually, in this synagogue that I grew up in, we had a Sephardic minyan that was set aside.”

Farhadian Weinstein hasn’t been back to Iran since she escaped 40 years ago. “I wish,” she said, adding that she has been to Israel several times since she passed through the country for the first time as a four-year-old. “I identify with it very much culturally,” she said of her Persian heritage.

Recently, she has been watching the new Israeli TV show “Tehran,” about a Mossad agent stuck in Iran. “It’s actually really great,” she said, adding that the show is in Hebrew and Farsi, which resonates with her. “It’s interesting for me to see them switching between what I consider two different mother tongues.”

Farhadian Weinstein graduated from Yale University and then won a Rhodes Scholarship to attend Oxford, where she reconnected with her roots, at least in a scholarly setting. She studied Arabic, learned how to write Farsi — which had previously only been a spoken language for her — and wrote her thesis on Arab Jewish literature in Israel.

Still, Farhadian Weinstein felt unfulfilled. Though she had imagined she would become an academic, she switched paths after her time in England, returning to the U.S. to get her law degree and scoring two coveted clerkships with Judge Merrick B. Garland and then former Associate Supreme Court Justice Sandra Day O’Connor.

“There are obviously other ways to have a meaningful life in public service that do not involve being a lawyer,” said Farhadian Weinstein, but she said she viewed the law as the highest calling.

Farhadian Weinstein, who has also worked for former U.S. attorney general Eric Holder — the narrator of her campaign launch video — cites a number of accomplishments from her tenure as general counsel to Brooklyn district attorney Eric Gonzalez, including a newly published study, more than a year in the making, analyzing wrongful convictions. “We did this to say this is how systematic change starts, by being open and transparent and in a posture of correcting and learning,” she said, going on to mention a recent successful lawsuit filed in partnership with New York State Attorney General Letitia James against the Immigration and Customs Enforcement agency, which a judge recently ruled could not make arrests in and around courthouses.

Though she is grateful for her time serving under Gonzalez, Farhadian Weinstein made clear that she is ready to import the lessons she learned in Brooklyn to her home district. “I was ready to take all of that learning and bring to Manhattan my vision for what I think the Manhattan DA’s office should look like,” she said.

“I bring to this role the work that I’ve done in thinking about immigrants in the criminal justice system, how noncitizens fare,” she said, “just to make sure that we’re really delivering for everybody, including for them.”

Samuel Rascoff, a professor of law at New York University’s School of Law who has known Farhadian Weinstein for about 30 years, believes that she is the right person for the job. “It feels like exactly the right way to kind of harness her legal acumen to the goal of promoting equality and fairness at a time when those ideals are, I would say, as important as ever,” he told JI.

If elected, Farhadian Weinstein said she would work to reform the criminal justice system as mass protests against systemic racism have swept the nation, but she believes that calls to defund the police are misguided. “I don’t like the word ‘defund,’” she said. “I think it’s inflammatory and actually not particularly solution-oriented.”

Farhadian Weinstein was part of a New York State Bar Association task force that recently put out a report on domestic terrorism and hate crimes, which she emphasized she would “robustly” investigate as DA. Farhadian Weinstein also said that she plans to build a new bureau to handle “gender-based violence,” focusing on sexual assault, stalking, nonconsensual pornography and domestic violence, which she described as “a pandemic before the pandemic.”

This part of her platform functions as an implicit critique of Vance, who has been criticized for declining to prosecute Harvey Weinstein in 2015.

When asked about sharing a surname with one of the most high profile sexual predators in recent years, Farhadian bristled at the premise. “I think the Manhattan voter is going to be able to tell the difference between me and him,” she said. “Do I have to tell you on the record that I’m not related to Harvey Weinstein in any way? It’s a really common Jewish name.”

Vance, who recently won a Supreme Court battle to subpoena President Donald Trump’s tax returns, has also come under scrutiny for his decision not to pursue the president and his children for fraud in 2011, a year after Vance was elected to the district attorney’s seat.

Farhadian Weinstein is in a strong position as she enters the race given that she can self-fund her campaign. She is married to Boaz Weinstein, the wildly successful founder of Saba Capital Management, a hedge fund which has seen high returns amid the coronavirus pandemic.

The pair first met about 12 years ago after attending a book party at the UJA-Federation of New York, where Farhadian Weinstein has just now finished a term of service as a board member.

“I went and talked to some people and came home, and then a week later this guy Boaz calls me,” she recalled. “He said that he saw me across the room at this party, and he thought that we made eye contact — I think that he might kill me for telling you this story — and that I smiled when we looked at each other and would I go out on a date with him, and the rest is history.”

“I still cannot confirm or deny whether that happened,” she said when asked if they had indeed made eye contact.

The couple now lives on the Upper East Side with their three daughters, who are currently staying in Long Island with Farhadian Weinstein’s parents. “He’s just always been unbelievably supportive of me,” she said of her husband. “We’re going to start the hashtag #prosecutorhusband instead of #hedgefundwife,” Farhadian Weinstein quipped.

The veteran prosecutor will have a tight race ahead of the Democratic primary, which is scheduled to take place next summer. She is going up against a number of formidable candidates including New York Law School professor Alvin Bragg, civil rights lawyer Janos Marton and Eliza Orlins, who recently took a leave of absence from the nonprofit Legal Aid Society to enter the race.

Orlins alleged to JI on Thursday that Farhadian Weinstein is too enmeshed in the fabric of the city’s legal machine to make a difference. “If we want real reform in the Manhattan DA’s office,” she argued, “another career prosecutor like Cy Vance is not the answer.”

But Farhadian Weinstein rejects such characterizations. “I thought it was an important time for all of us to step up in whatever way we can,” she said, “and this is my way of trying to meet that demand.”