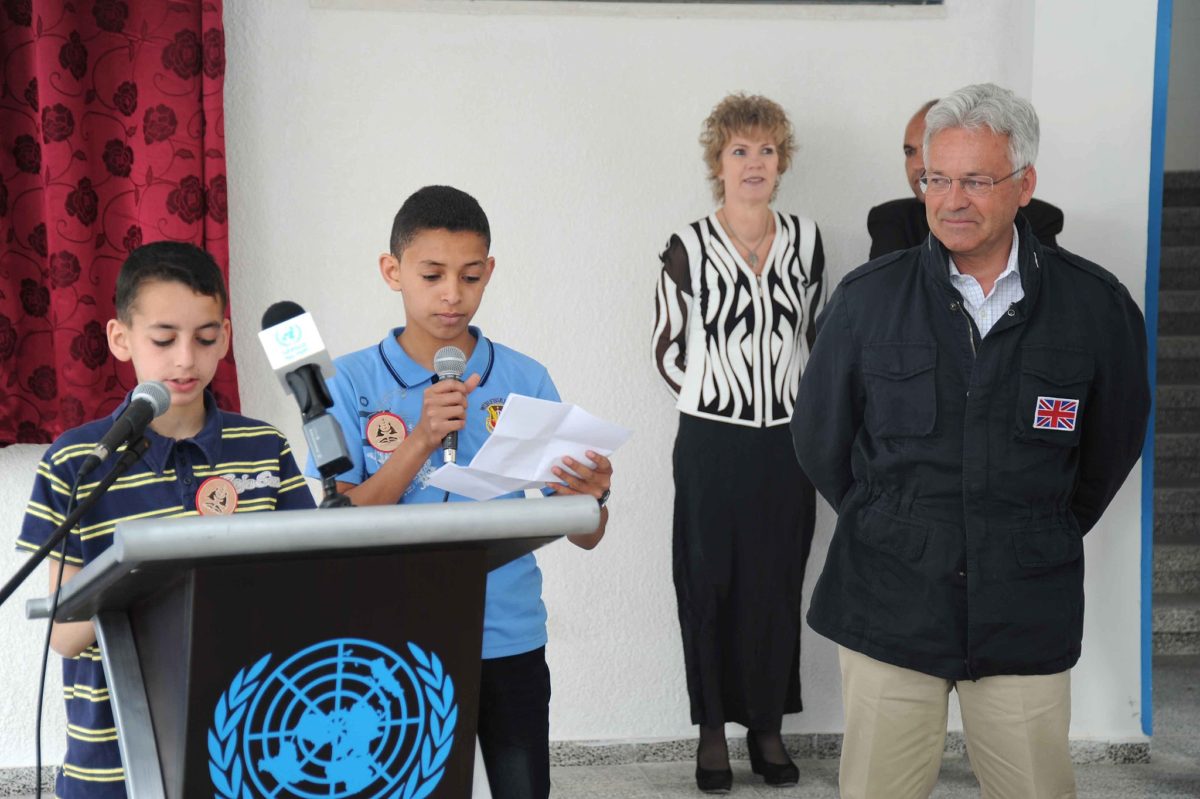 UK Minister of State for International Development, Alan Duncan MP, looks on as students deliver a presentation at the opening of a UK-funded elementary school in Gaza in 2013.

One month after the head of the United Nations Relief and Works Agency for Palestine Refugees in the Near East (UNRWA) acknowledged that anti-Israel content had been printed in workbooks distributed throughout Gaza in the fall, the organization is again under scrutiny for materials distributed in December and January that glorify violence and characterize Israelis as “our enemies.”

A report released Wednesday by IMPACT-se, an Israel-based watchdog organization that monitors Arabic-language educational content, highlighted learning materials that it claims glorify violence. Much of the material, including numerous references to Israelis as “enemies,” was created by UNRWA-trained educators and does not appear in textbooks and workbooks issued by the Palestinian Authority.

In a January grammar exercise, a flashcard reads “the Occupier commits all kinds of torture.” An exercise in verb conjugation includes the line “jihad is the road of glory.” Social studies curricula don’t acknowledge the existence of Israel, referring to the area known before 1948 as the British Mandate as “Palestine.”

In a Twitter thread last month, UNRWA Commissioner General Philippe Lazzarini said that “Local reference to inappropriate pages [from] textbooks that were mistakenly distributed during #COVID19 lockdown were quickly replaced with content that adheres to UN values.”

Lazzarini did not respond to a private message from Jewish Insider at the time asking how the pages were retrieved from the 300,000 students the organization services in Gaza.

“UNRWA has both said they had no choice but to teach [the curriculum] but also has always said they have all these guardrails about how it can be moderated,” IMPACT-se CEO Marcus Sheff told JI. “Nobody has ever extracted from UNRWA a real practical example of how this is done. Does a teacher in an UNRWA school in Khan Younis in the Gaza Strip tell people not to read that particular sentence about Dalal Mughrabi [a Palestinian militant who died in a 1978 terror attack that killed 34 Israelis] because it is problematic? We’ve never understood it, [and] they’ve never explained it.”

James Cleverly, the U.K.’s minister of state in the Foreign & Commonwealth Office and the Department for International Development, testified in Parliament earlier this month that the content had been rectified by November 2020. Cleverly did not respond to a request for comment.

Also earlier this month, concerns were raised by Miriam Lexmann, a Slovakian member of the European Parliament’s Foreign Affairs Committee, over previous controversial material distributed to UNRWA schools. The European Union contributes upwards of $150 million to UNRWA, its second-largest sponsor after Germany, which gives more than $200 million annually to the agency.

A spokesperson for UNRWA did not respond to a request for comment.