Nevertheless, Democrats will vote on whether to oust freshman Rep. Marjorie Taylor Greene from her committee assignments 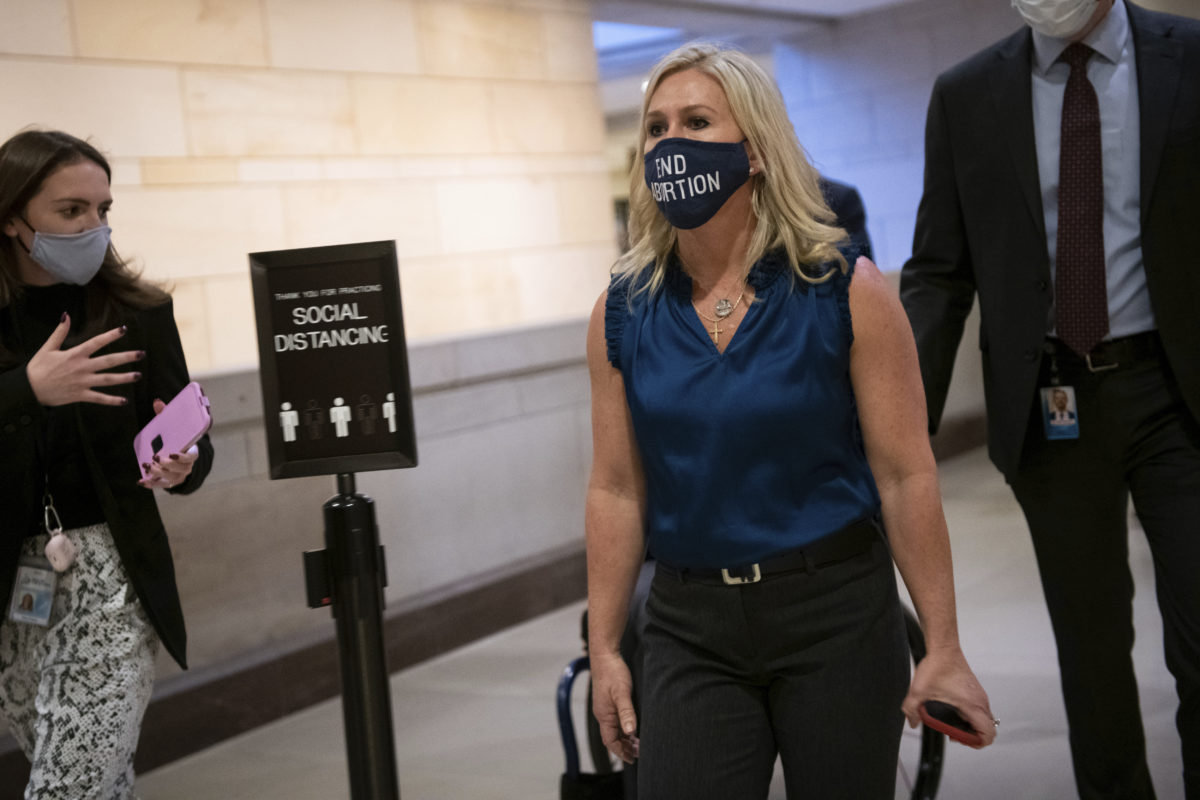 Greene is facing a firestorm of controversy over recently surfaced comments claiming that the Rothschilds used laser beams to start wildfires in California; endorsing the execution of Democratic lawmakers; and accusing mass shooting survivors of being actors. Cheney, meanwhile, faced calls for her removal as GOP conference chair over her vote to impeach former President Donald Trump.

Despite GOP support for Greene, Democrats pushed ahead with a measure to remove the freshman congresswoman from her committee slots, which will come up for a full House vote on Thursday.

During the GOP meeting, Greene gave a speech apologizing for her past conduct and statements and disavowed the QAnon conspiracy theory, according to multiple lawmakers who were in the room.

“Marjorie Taylor Greene made an excellent speech,” Rep. Thomas Massie (R-KY) said. “She was contrite. And I think she brought a lot of people over to her side.”

Rep. Jeff Van Drew (R-NJ) echoed that sentiment. “People really heard someone who felt sorry for some of the things that she said, and was willing to move on and wants to do the best job she can do,” Van Drew said.

Multiple reporters said Greene received a standing ovation inside the meeting following her speech, with one reporting that around half the conference joined in.

House Minority Leader Kevin McCarthy (R-CA) and other Republicans said they wanted Greene to apologize publicly for her past comments.

“I think everybody should hear that [apology],” McCarthy said in a press conference after the Wednesday evening meeting. “I think it’d be helpful if you could hear exactly what she told all of us.”

Asked by reporters whether he accepted Greene’s apology, Rep. Dan Crenshaw (R-TX) said he wanted to see her speak out publicly. “I want to see her give more public statements along the lines of what we had privately. I want to see very clear denunciations of everything that’s been said,”

But others, including Massie, said they felt Greene did not need to offer an apology to the American public. “They didn’t elect her,” he said. “She was elected by people in Georgia. And everybody in Georgia supports her.”

Earlier Wednesday, Greene remained defiant on her Twitter feed, saying, “We owe them no apologies. We will never back down.” Greene has been aggressively fundraising off of Democratic attacks, and did not reply to questions following the meeting about making a public apology.

Rep. Adam Kinzinger (R-IL) — a critic of Trump and his party’s right wing told reporters Wednesday evening that the GOP’s travails over Greene are likely not yet resolved.

McCarthy’s proposal fell well short of what Democrats have been demanding publicly — that Greene be removed from all of her committee assignments, as former Rep. Steve King (R-IA) was in 2019 after his comments on white supremacy.

Traditionally, committee assignments are handled internally by the parties. Republican lawmakers warned that the Democratic proposal to oust Green would be an unprecedented step that could backfire on Democrats in the future. “It’s a Pandora’s Box that they do not want to open,” Massie said.

Rep. Ritchie Torres (D-NY), a prominent member of the Democratic freshman class, told JI on Wednesday that he supports not just removing Greene from her committee assignments, but expelling her from the House entirely. He added that he is not concerned about setting a precedent that Republicans might use against Democrats in the future.

“There is no one on the left who is remotely comparable to Marjorie Taylor Greene,” Torres said. “It is a false equivalence. She is a uniquely egregious actor in the House of Representatives… The standard here is high.”

Despite the Democratic furor over Greene’s conduct, Wednesday’s GOP meeting focused largely on the other item of business — whether to remove Cheney as conference chair. Cheney ultimately triumphed by a vote of 145-61, with one member voting “present.”

At the press conference following the vote, McCarthy, Minority Whip Steve Scalise (R-LA) and Cheney attempted to counteract the public perception of a divided GOP.

“We really did have a terrific vote tonight and terrific time this evening, laying out what we’re going to do going forward, as well as making clear that we’re not going to be divided,” Cheney said. “It was a very resounding acknowledgment that we need to go forward together and that we need to go forward in a way that helps us beat back the really dangerous and negative [Democratic] policies.”