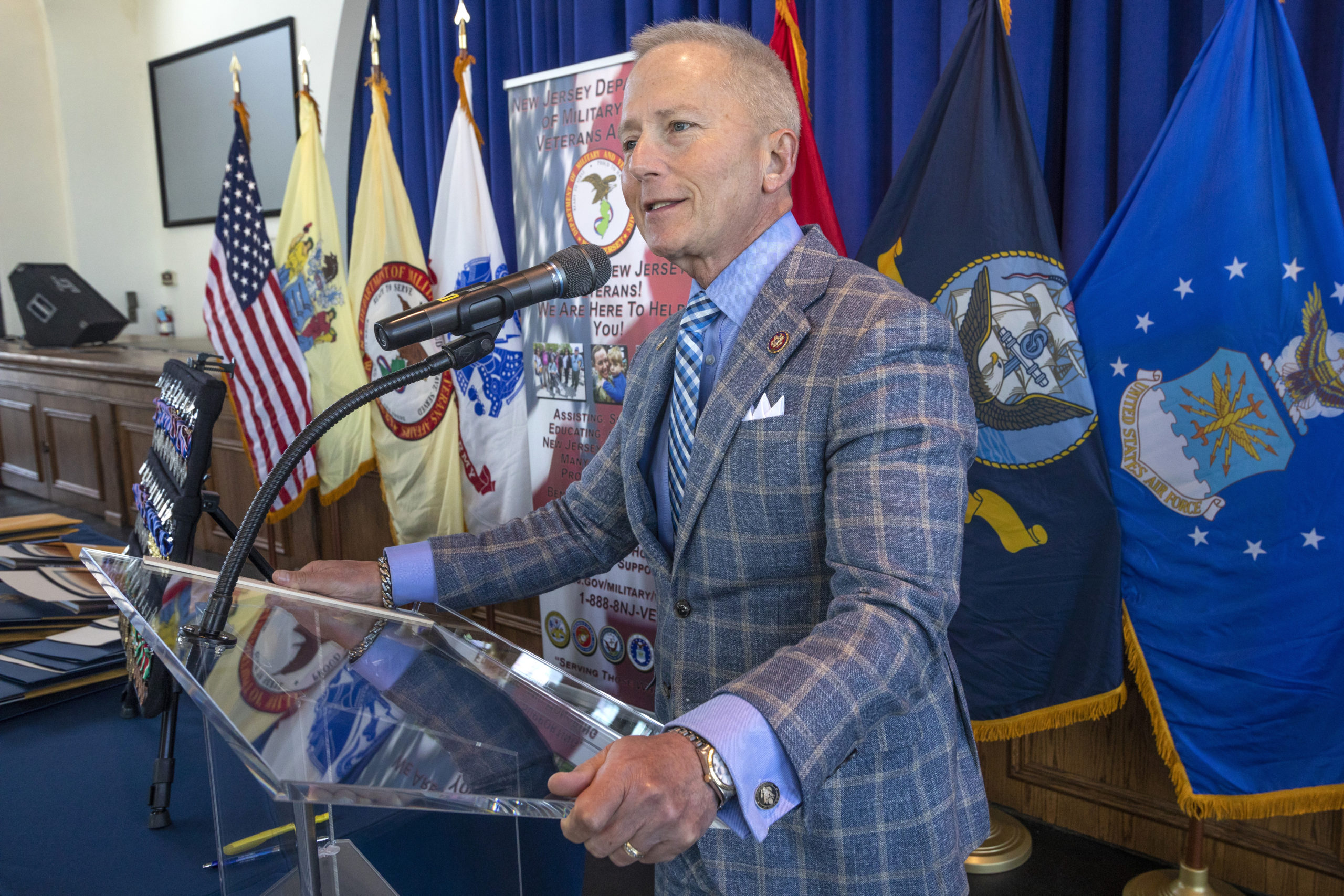 Jeff Van Drew’s abdication from the Democratic Party last January was viewed by many as an act of political suicide. The 67-year-old freshman congressman, who until not long ago identified as a conservative-leaning Democrat, flipped his New Jersey district in 2018, replacing the retiring Republican Rep. Frank LoBiondo. But Van Drew returned the district to its previously red status when, defying his party, he voted against President Donald Trump’s impeachment, became a Republican and, in the process, affixed a target to his back.

In the Oval Office a day after his vote, Van Drew doubled down, pledging his “undying support” for the president as he committed himself to the GOP — drawing opprobrium from both sides of the aisle. Several of his staffers quit in protest, while some Republicans were also suspicious of the about-face, including his opponent, David Richter, a Republican congressional candidate who is now running in a neighboring district after having been edged out by Van Drew, who was endorsed by Trump.

Despite the drama, Van Drew appears to have settled relatively seamlessly into his new party affiliation. He delivered a speech on the final night of the Republican National Convention and has positioned himself as a staunch ally of the president’s, with whom he talks to not infrequently.

“I feel more comfortable with issues because I was always a moderate to conservative,” Van Drew told Jewish Insider in a Zoom interview on Thursday afternoon from his home in Dennis Township.

Wearing his trademark checkered blue jacket and in a red tie reminiscent of one of Trump’s favorite fashion accouterments, Van Drew affected an even-tempered demeanor as he discussed his trajectory from Cape May County freeholder through the state legislature and into the halls of Congress.

“It was probably good for Democrats that I left,” said Van Drew, who has become a harsh critic of his former party members. “I didn’t represent their viewpoint.”

Van Drew has been largely press-shy since he left his party behind 10 months ago, but recently he has been doing interviews with a number of media outlets as polls suggest he is narrowly trailing his Democratic opponent in the race to represent New Jersey’s 2nd congressional district, which includes the southern portion of the state.

Asked to describe his experience campaigning as a Republican after so many years as a Democrat, Van Drew was upbeat. “It feels good,” he told JI, noting that he has also been busy tending to constituent services amid the coronavirus pandemic. “People are people. People still have the same problems. The problem doesn’t change just because I’m a Republican now — and the answer doesn’t change, as a rule, because I’m a Republican.”

He will find out whether his gambit has paid off on November 3, when he is set to go up against Amy Kennedy, a former public school teacher who is married to retired Rhode Island Rep. Patrick J. Kennedy and grew up in the district. Kennedy entered the race in early January, not long after Van Drew’s defection, which motivated her to seek public office in an effort to unseat the party apostate.

“It felt to me like that was a teachable moment,” Kennedy said of Van Drew’s Oval Office announcement in an interview with JI last April. “When you’re pledging loyalty to another politician, you’ve lost your way.”

Whether voters will feel the same is an open question with less than two weeks until the election. While the swing district went for Barack Obama in 2008 and 2012, Trump won it by a margin of nearly 5 points four years ago.

Things have changed since then, of course, as Trump’s poll numbers have sagged, which could negatively affect down-ballot Republican candidates who have allied themselves with the president. Kennedy has slightly outraised her opponent in the race to represent the 2nd district, having pulled in more than $3.8 million, according to the most recent filings from the Federal Election Commission.

“It’s going to be close,” said Mike DuHaime, a Republican strategist in New Jersey who believes that Van Drew’s decision to switch parties was the right move given the congressman’s feelings at the time. “It wasn’t a mistake for Van Drew to switch parties if he was committed to voting against impeachment,” Duhaime observed. “The Democratic Party would have thrown him out in a primary if he was the only Democrat in America voting against impeachment.”

Van Drew was one of two Democrats to vote against impeachment. The other was longtime Rep. Collin Peterson (D-MN), who chairs the House Agriculture Committee and serves a rural district of Minnesota that is historically conservative.

For his part, Van Drew told JI that his defection from the Democratic Party was a long time coming — and that his nay vote on impeachment was simply the tipping point.

Van Drew, a retired dentist, said he had always had misgivings about being a self-described Blue Dog Democrat, but that he was assured by his party that it could accommodate someone with his leanings. “I originally said many years ago, ‘Are you sure I’m not a little bit too conservative, too moderate for the party?’ And they said, ‘No, because it’s a big tent,’” Van Drew recalled. “Well, that big tent has changed a great deal.”

One reason for his disenchantment was Democratic support for the Iran nuclear deal, which Trump abandoned in 2018 — a decision Van Drew supports. “That’s an issue where I’m obviously Republican compared to what the Democrats are moving toward,” he said.

“I never was in favor of the nuclear deal,” the congressman elaborated. “We know that Iran is one of the most dangerous forces of terrorism and exporters of terrorism in the world, particularly in the Mideast, and that, quite frankly, they hate Israel.”

Van Drew described himself as an unabashed supporter of the Jewish state, expressing his concern that some progressive members of the Democratic Party have adopted critical views on Israel that he regards as unwelcome.

Though he has never been to Israel, Van Drew said that he plans to go next year, most likely through a congressional delegation if he is elected to a second term. He did not specify who he would travel with.

Over time, Van Drew said he came to realize that his disagreements with Democrats on a range of other issues like sanctuary cities and looser immigration laws, which he opposes, were becoming untenable. “I became progressively more disturbed about it and more unhappy,” Van Drew said. “I’m a loyal person, so I kept sticking to ‘Hey, I’m a Blue Dog Democrat.’”

Then the impeachment inquiry arrived. Van Drew has said he was told he had to vote for impeachment by a party chair of the New Jersey Democratic Party — and that order, he told JI, pushed him to the other side, as did a meeting with Trump during which the president advised that Van Drew should become a Republican.

“The moment was spontaneous, but it represented years of build up,” Van Drew recalled. “And I said, ‘You know what, I think I should become a Republican, too.’”

Dan Cassino, a political scientist at Fairleigh Dickinson University, said that Van Drew’s party switch was based on a calculation that the blue wave that brought him and other moderate Democrats across the country to Congress would recede and that he would have a better chance at winning as a Republican. “But that just hasn’t happened,” Cassino said, adding that Kennedy has benefited from a sizable war chest as well as the existence of a smaller number of competitive House races in New Jersey — allowing progressives to focus their resources on the 2nd district.

Still, while “a lot of people are dunking on Van Drew, saying that his party switch was a complete miscalculation,” Cassino isn’t convinced that Van Drew would be in better shape if he’d stuck with his former party. “The party switch seems like it might have cost him reelection,” he told JI, “but I don’t know that he’d even be in the running at this point if he hadn’t made the switch.”

Van Drew defended his decision to change parties against charges that he was acting opportunistically, noting that in making the switch he moved to the minority party in the House after having served in its majority. “I didn’t do it, obviously, to gain power,” he said.

He said that he has found a large portion of his constituents still accept him, though a recent poll from Monmouth University put him five points behind Kennedy, who is supported by 49% of registered voters.

“I wish her well — I know that she loves her kids and she’s, I’m sure, a good mom,” Van Drew said of Kennedy, who is fighting not only to unseat Van Drew but to keep the Kennedy name in Congress after outgoing Rep. Joe Kennedy (D-MA) lost his recent Senate bid in the Massachusetts primary.

Josh Roesch, Kennedy’s campaign manager, offered a scathing assessment of Van Drew in a comment to JI. “Jeff says the Democratic Party left him, but in reality, he abandoned the people of South Jersey,” Roesch said. “He’s voted against the relief our communities need and he’s refused time and again to stand up for our communities. We’ve talked to thousands of voters throughout South Jersey and it’s clear that people are hungry for change and new leadership.”

While Van Drew has positioned himself as a staunch Trump ally, he says there are issues on which he and the president differ. Van Drew vowed, for instance, that he would not vote to repeal the Affordable Care Act unless it was clear there would be something that would immediately replace it. “You cannot remove healthcare and not have a good replacement,” he said.

Though Trump has been accused of inflaming white nationalist sentiment — thanks in part to his recent instruction during the first presidential debate that the Proud Boys “stand back and stand by” — Van Drew contends that an increase in antisemitic rhetoric can largely be attributed to the Democrats.

“The rhetoric is not coming from the Republican Party,” he said, alleging that some of his former progressive party members have espoused anti-Israel views that veer into antisemitism. “I know that there are many Democrats who are Jewish that are hurt by this.”

“I don’t like mandatory anything, usually, especially with education, but there should be mandatory instruction in just the basic history of our country and what’s happened,” Van Drew told JI, noting that he had spoken to a number of young people with little knowledge of the Holocaust or America’s involvement in World War II. “They know very little about their own country,” Van Drew said. “We have to know and understand the dangers, what that means.”

“There are things that are happening in the United States that, slightly, are reminiscent of what was happening there,” Van Drew said, alluding to pre-war Europe and later going on to mention the defacing of synagogues. “We’ve got to nip that in the bud.”

Van Drew believes he is on the right side of history, but he will soon discover if his judgement proves compelling enough to voters that he can earn another term in Congress.

Meanwhile, he still appears to be adjusting somewhat to the fact that he now serves in the Republican Party after years as a Democrat.

While discussing some legislation that the Republicans had put forward on an issue, the congressman trailed off for a moment after he realized that he was about to say he wasn’t speaking for the GOP.

But then he self-corrected: “I guess I am speaking for the Republican Party.”