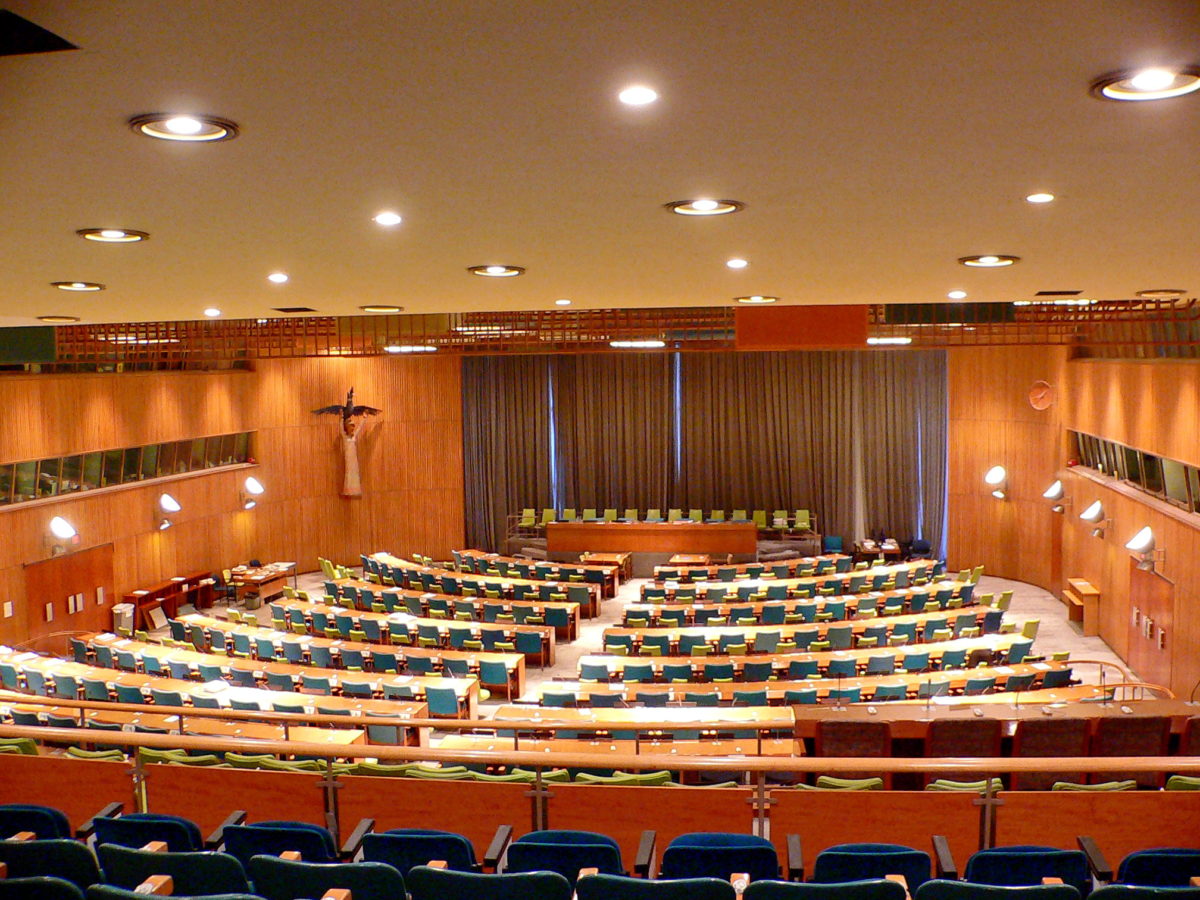 Earlier this month, the United Nations agency tasked with working with Palestinians said it mistakenly issued textbooks that call for jihad, or holy war, against Israel. The agency, the United Nations Relief and Works Agency for Palestine Refugees in the Near East (UNRWA), said it was “taking steps” to address their glorification of “martyrs” and calls for “jihad.”

UNRWA issued the apology after the Jerusalem-based Institute for Monitoring Peace and Cultural Tolerance in School Education – IMPACT-se released a report analyzing Palestinian textbooks that are used by hundreds of thousands of students in the West Bank and Gaza.

The Biden administration is expected to move to restore funding to the Palestinians, aid the Trump administration withdrew in September 2018. The move would be consistent with Biden’s pledge to “repair our alliances and engage the world once more,” but Jewish leaders and others are looking on with caution, hoping the new administration does not repeat what some believe were mistakes of the past.

Among their concerns is President Joe Biden’s explicit pledge to rejoin the U.N. Human Rights Council and “work to ensure that body truly lives up to its values,” as the president said in a December 2019 statement commemorating the United Nations’ Human Rights Day.

Daniel Mariaschin, CEO of B’nai B’rith International, told Jewish Insider that his organization hopes that the Biden administration “will work assiduously to eliminate bias against Israel in New York and in the various U.N. agencies, particularly the U.N. Human Rights Council.”

The Geneva-based council routinely “devotes a separate agenda item, number seven, to Israel alone while all other countries, including the worst tyrannies, are lumped together in a different agenda item,” observed David Harris, CEO of the American Jewish Committee.

Harris said that when it comes to U.N. agencies, “the Biden administration can be expected to take a more collegial, less adversarial approach than the Trump team. That said, it needs to be done with issues of fairness and equal treatment in mind, which is certainly not the case, say, when it comes to our ally, Israel, and its treatment.”

The council was created in 2006 to replace the U.N. Human Rights Commission, which had come under international criticism for including member nations that were themselves human rights abusers. The administration of President George W. Bush did not support its creation and kept its U.N. ambassador off the council because of concerns the U.S. might not get elected. (In 2001, the U.S. was defeated in its bid to join the old commission.) Countries with lesser human rights records were elected to the body and helped to set the standards in the council’s early years.

That changed in 2009, when President Barack Obama chose to participate in the council, maintaining that states should “uphold the highest standards” of human rights. The U.S. was the first elected to the council that year. Nine years later, President Donald Trump withdrew the U.S. from the council. Nikki Haley, then the U.S. ambassador to the U.N., cited its “chronic bias against Israel,” and noted that the U.S. had repeatedly threatened to leave the 47-member body unless it made reforms. She said it had failed to make necessary changes and called it a “cesspool of political bias” that “makes a mockery of human rights.”

With the Biden administration set on rejoining the council — whose membership has included dictatorial regimes and some of the world’s worst human rights violators — the question is whether it “will it be able to enact reforms,” said Gerald Steinberg, a professor of politics at Bar Ilan University and founder and president of NGO Monitor, a policy analysis think tank focusing on non-governmental organizations.

“A huge part of [the council’s] budget is used for bogus investigations of Israel,” he said. “It’s not realistic to expect the administration and a Democratic Congress will meet the hopes of Israelis on these points, but if they are sensitive to them, it will put down some markers in terms of the use of these institutions to demonize Israel.”

Similar concerns were voiced by Hillel Neuer, executive director of UN Watch, a human rights NGO and U.N. watchdog based in Geneva.

“It will require an enormous amount of effort to get them to do good things,” he said of the council. “But its anti-Israel agenda, its commissions of inquiry against Israel and its blacklist against Israel were unstoppable by both Democrats and Republicans. It is anti-Israel. UN Watch does not object to the U.S. entering the council.”

“We think it could be a force for good,” Neuer continued, “but it has to fight and call out the abuses and double standards and antisemitism. I’m concerned because the Obama administration did try to do good things at the council, but unfortunately became a cheerleader for the council. We hope the Biden administration does not make the same mistakes.”

Regarding UNRWA, the AJC’s Harris said it too has had a “persistent problem of incitement and hatred in their schools and other facilities. American re-engagement [with UNRWA] must also focus determinedly on ending these practices, which, let’s be clear, undermine the integrity of the world body.”

Some 5 million Palestinian refugees are said to rely on UNRWA to provide funding for their schools, healthcare and social services. The U.S. had long been the largest funder of UNRWA, pledging about one-third of the agency’s $1.1 billion annual budget. At the time Trump withdrew funding (which included cutting $200 million from UNRWA’s main development agency, USAID), the former president said he did not want the U.S. to continue to “shoulder the disproportionate cost” of the organization and called upon the Palestinians to return to peace talks with Israel. The move was also seen by some as an attempt to delegitimize the refugee status of some Palestinians and their descendants.

Although UNRWA has looked to other nations to fund its operations, it announced two months ago that its funding has largely dried up and that it would soon be unable to pay its 28,000 staffers and contractors who work in Gaza, the West Bank and elsewhere. Elizabeth Campbell, director of UNRWA’s Washington office, has been quoted as saying she believes the Biden administration will come to her organization’s rescue, noting that Vice President Kamala Harris has said the Biden administration would restore economic and humanitarian assistance to the Palestinians.

Neuer said his organization is also concerned that the Biden administration “might consider restoring funding to UNRWA despite the fact the organization is fundamentally hostile to the existence of Israel as a Jewish state. It’s fine to send money to Palestinians, but the U.S. should not be funding an agenda” that promotes the idea that 2 million Palestinians living in Jordan “should have Israeli citizenship… I hope it does not fund it.”

Mariaschin of B’nai B’rith noted that the 71-year-old agency “has for decades raised three generations of Palestinian children on hatred of Israel and hatred of Jews. It is an organization that promises the Palestinians that all refugees and their descendants will be able to return to what is now the State of Israel.”

“If we are going to move the meter on any kind of peaceful arrangement in the region,” Mariaschin cautioned, “UNRWA cannot continue business as usual — engaging in this kind of education of hate, the promotion of hatred and the insistent demand that Palestinians be able to return in the millions to the State of Israel. That is a non-starter.”

“People in the administration and in Congress want to undo everything and signal to the Palestinians that their support network is being restored under the Democratic administration,” said NGO Monitor’s Steinberg. “The question is whether enough lessons have been learned. Just last week a detailed report was released that found that UNRWA’s education system was used for incitement. They found in a new textbook support for jihad. When asked about it, they said they had made a mistake.”

Questions have also been raised about how UNRWA spends its money, Steinberg said, noting that a few years ago the head of UNRWA was found to have “hired his girlfriend at a big salary.”

He suggested that the Biden administration consider “using a different vehicle to send funds to Palestinians.”

Although he said there is concern in Israel that Biden will bring back some of the policies Israel did not like from the Obama administration, Steinberg added that there is “optimism that people like Tony Blinken [Biden’s nominee for secretary of state] who were in the Obama administration and saw the mistakes that were made will be more careful.”

Groups in Europe are focused on additional areas of concern. Adam Thomson, director of the European Leadership Network, a pan-European think tank, said in an email that what his members “hope for — and indeed expect — from the Biden administration [is] a resumption of U.S. leadership on the pressing requirements for arms control, risk reduction and military-to-military dialogue across the Euro-Atlantic area, and especially across the NATO-Russia divide.”