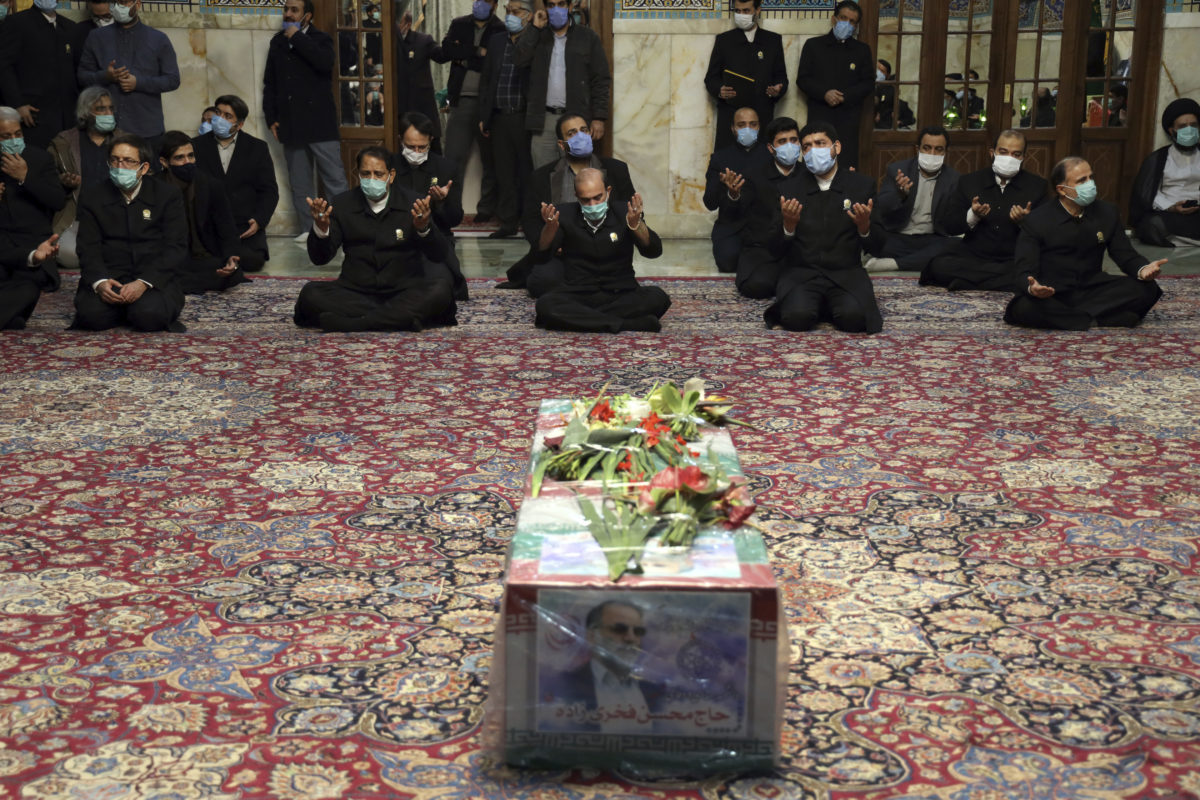 In this picture released by the Iranian Defense Ministry and taken on Saturday, Nov. 28, 2020, people pray over the flag draped coffin of Mohsen Fakhrizadeh, an Iranian scientist linked to the country's disbanded military nuclear program, who was killed on Friday, during a funeral ceremony at the Imam Reza holy shrine in the northeastern city of Mashhad, Iran. An opinion piece published by a hard-line Iranian newspaper has suggested that Iran must attack the Israeli port city of Haifa if Israel carried out the killing of a scientist.

American and Israeli leaders remained mum over the weekend over the killing of top Iranian scientist Mohsen Fakhrizadeh, who was shot at close range in an ambush on his motorcade in northern Iran on Friday. A U.S. official told The New York Times that Israel was behind the attack.

The European Union condemned the killing, while the U.K. and Germany expressed concern it could lead to an escalation in the Middle East.

Iranian journalist Mohamad Ahwaze reported that the mission was carried out by a team of 62 people, including a dozen highly-trained operatives. However, the IRGC-affiliated Fars News agency reported that Fakhrizadeh was hit by an automatic machine gun placed on a pickup truck and activated by remote after Fakhrizadeh exited his vehicle.

Fakhrizadeh was the head of the Iranian Ministry of Defense’s Amad project and the architect of the country’s nuclear program. He was reportedly on the Mossad’s target list for years, and was mentioned specifically by Israeli Prime Minister Benjamin Netanyahu during a 2018 press conference on Iran’s nuclear program.

In a tweet retweeted by President Donald Trump on Friday, veteran Israeli journalist Yossi Melman said Fakhrizadeh’s death “is a major psychological and professional blow for Iran.” Michael Mulroy, a former deputy assistant secretary of defense for the Middle East in the Trump administration, told the Times the assassination was “a setback to Iran’s nuclear program.”

Already burdened by the strain of crippling financial sanctions, Iran is reportedly grappling over potential retaliation, given the possibility of sanctions relief under a Biden administration. A top advisor to Iranian Supreme Leader Ayatollah Ali Khamenei said on Sunday that the regime will make a “calculated and decisive” response to the killing. Hezbollah deputy leader Sheikh Naim Qassem indicated that Tehran will probably launch a “limited attack” on Israel without taking the risk of activating its proxies in the region.

Ilan Goldenberg, director of the Middle East Security Program at the Center for a New American Security, suggested that it is unlikely Iran will feel pressure to respond because Fakhrizadeh’s profile is not “in the same ballpark” of Qassem Soleimani, the head of Iran’s Quds Force who was killed by U.S. forces last year, an act that prompted a retaliatory attack on the U.S. Embassy in Baghdad. Israeli security officials expressed concern that Israeli tourists could be the target of terror attacks while visiting the Gulf.

Former Obama administration officials and senior Democrats, as well as some former IDF officials, accused both Israel and the Trump administration of working to complicate Biden’s much-discussed plan to return to the 2015 nuclear deal with Iran. In a tweet on Friday, former CIA director John Brennan called the killing “a criminal act and highly reckless.” Robert Malley, who served as the Obama administration’s point man on the Middle East at the National Security Council, suggested that the attack was part of a plan to “solidify” Trump’s legacy “and make it all the more difficult for [his] successor to resume diplomacy with Iran.”

Former deputy national security advisor Ben Rhodes blasted the Fakhrizadeh killing on Friday, calling it “an outrageous action aimed at undermining diplomacy between an incoming U.S. administration and Iran.” Sen. Chris Murphy (D-CT) suggested that “this assassination does not make America, Israel or the world safer.”

Ross, a distinguished fellow at The Washington Institute for Near East Policy who served in the Carter, Reagan, George W. Bush and Obama administrations, maintained that “such an operation takes extensive planning, having operatives on the ground, actionable intelligence. It can’t be spur of the moment.” Ross added in an email that “if one wants to debate the logic of doing these kind[s] of targeted killings, that is totally appropriate. But saying this was done to derail what a Biden Administration will do simply ignores the reality of how these operations take place.”

Mark Dubowitz, CEO of the Foundation for Defense of Democracies, told JI that Fakhrizadeh “didn’t just appear at the top of the Mossad target list because Joe Biden got elected. This operation would have occurred regardless of the U.S. election results because he was a first order threat to the survival and security of the state of Israel.”

Dov Zakheim, former undersecretary of defense from 2001-2004, suggested that a Biden administration would continue intelligence cooperation with Israel and support covert action against Iran. “After all is said and done, if the Israelis can cooperate with Arab countries on intelligence years before they even informally were public about it, then why shouldn’t the U.S. cooperate with Israel on intelligence when it’s in their mutual interest?” he explained in a recent interview with JI.

New York Times columnist Tom Friedman writes that as Biden tries to navigate his way back into the 2015 nuclear deal with Iran, he will face greater resistance from a coalition comprised of Israel, Saudi Arabia and the UAE if he fails to build upon the Trump administration’s current leverage to ensure a more comprehensive agreement that addresses shortfalls in the original deal, including restrictions on ballistic missiles and Iran’s expansive terror network.