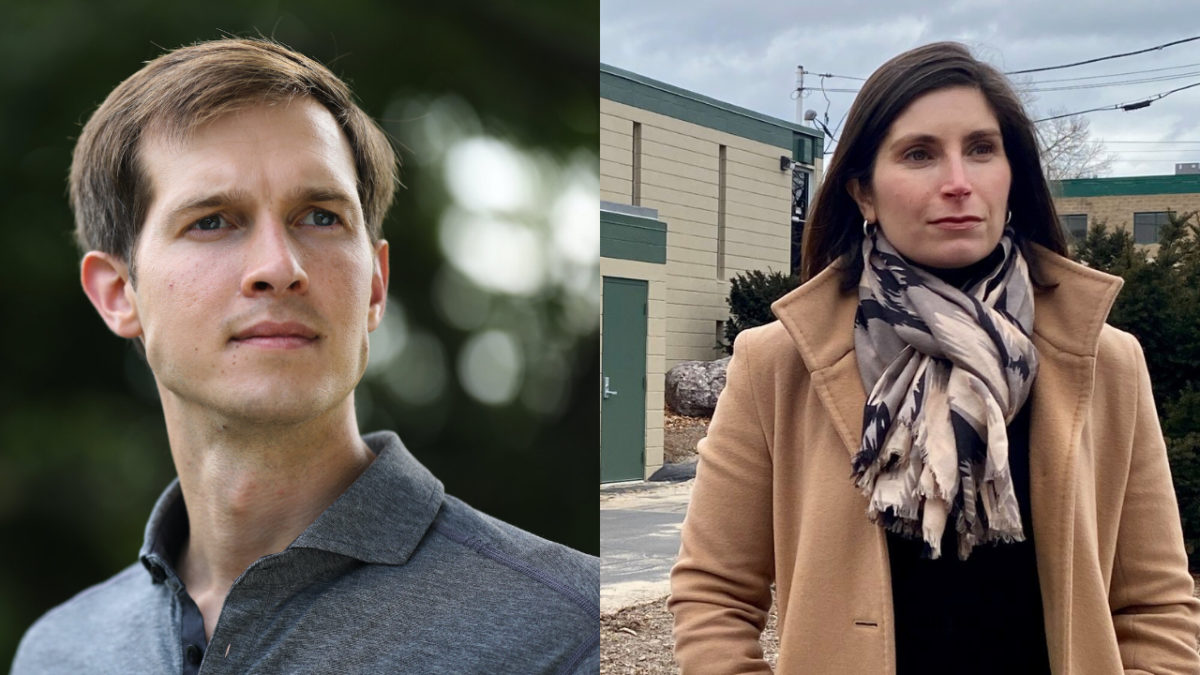 Twenty-three percent of voters polled support Auchincloss, while 22% back Mermell. The winner of Tuesday’s primary is all but guaranteed to be the next representative from the deep-blue district, which comprises a number of cities and towns in southern Massachusetts with sizable Jewish populations.

The two have emerged as frontrunners in what was for months a free-for-all, that at its peak saw 12 candidates vying for the seat, which Kennedy is vacating to challenge incumbent Sen. Ed Markey (D-MA).

The poll, produced by Jewish Insider and conducted by RABA Research via phone from August 27-28, surveyed 497 Democratic and independent voters in the district. Becky Grossman, a Newton city councilor and the daughter-in-law of former State Treasurer Steve Grossman, trails Auchincloss and Mermell with 15%. Former bank regulator Ihssane Leckey, who had initially entered the race to challenge Kennedy before he decided to launch his Senate bid last September, received 11%, followed by City Year co-founder Alan Khazei with 8%, epidemiologist Natalia Linos with 7% and attorney Ben Sigel with 1%. Ten percent of likely voters are still undecided.

Despite Auchincloss receiving the endorsement of the Boston Globe last month, Mermell has begun to consolidate support from other candidates ahead of Tuesday’s primary.

Nine candidates will appear on the ballot, but two — Dave Cavell and Chris Zannetos — dropped out of the race and endorsed Mermell, who served as an aide to former Gov. Deval Patrick and has a close relationship with Rep. Ayanna Pressley (D-MA), who has endorsed her.

“In a race that’s so crowded, you learn a lot about your opponents. So when people drop out and then throw their support behind you, that’s a huge sign that they’ve gotten to see you on the stump,” Steven Kerrigan, a Massachusetts political operative who served as former Sen. Ted Kennedy’s political director before running for office himself, told JI. “They know who you are, they understand your values, and they’re now willing to throw their name behind you.”

Auchincloss, who is Jewish, told JI in a recent interview that his religious background makes him appreciate “the imperative to create a welcoming and inclusive body politic and society.”

But Auchincloss has weathered attacks from other candidates over issues including his past Republican Party registration, controversial old social media posts and support he’s received from a PAC that has significant financial backing from his parents.

Additionally, a super PAC affiliated with Emily’s List released several anti-Auchincloss ads earlier this month. Leckey has called for Auchincloss to drop out of the race, while Cavell, upon exiting the race, said the city councilor was “unfit to represent this district.”

Auchincloss is not the only candidate who has come under criticism in the crowded primary. Over the summer, Jewish community leaders expressed concern over Leckey’s lack of engagement with the Jewish community in the district.

Leckey, who has raised eyebrows with her shifting position on the Boycott, Divestment and Sanctions movement, was absent from a July event hosted by the Jewish Democratic Council of America during which candidates addressed issues ranging from the BDS movement to antisemitism.

Many of the candidates have stressed their ties with the Jewish community over the course of the campaign. Attorney Ben Sigel, a member of the American Jewish Committee’s New England board of directors and one of the creators of the Combined Jewish Philanthropies’ Young Jewish Leaders Council, has touted his involvement as a lay leader.

Linos told participants on the JDCA call in July that she and her husband, who is Palestinian, chose to enroll their children in a daycare program at a synagogue to increase their exposure to the Jewish community.

Khazei, who like Linos is not Jewish, said he “did not grow up in a Jewish home, but I grew up in a home practicing tikkun olam,” a nod to his parents, who both worked in medicine.

The race has become one of the most expensive in the country, with candidates raising upwards of $8 million to eke out a win on Tuesday. Five of the seven remaining candidates — including Auchincloss, Grossman and Mermell — have pulled in more than $1 million each over the course of the race. “You can’t really minimize the amount of personal wealth and political fundraising that’s been raised by this field,” Democratic strategist Wilnelia Rivera told JI.

But it will be the strongest ground game, not the amount of money spent, that Rivera and others believe will lead one candidate to victory on Tuesday. Early voting began August 22, with record turnout predicted.

“Ultimately what this race is going to come down to is who has a better field operation in terms of talking to voters that have requested ballots already, and that haven’t actually voted on Election Day,” Rivera said. “But in a race like this, where the way in which people normally spend money is a little bit more limited because of the lack of in-person engagement, I really give the edge to the operation that has a better field to talk to those voters, because it’s not about pushing everybody. It’s about pushing those that are able to — in a pandemic — make it out of their way [to vote].”