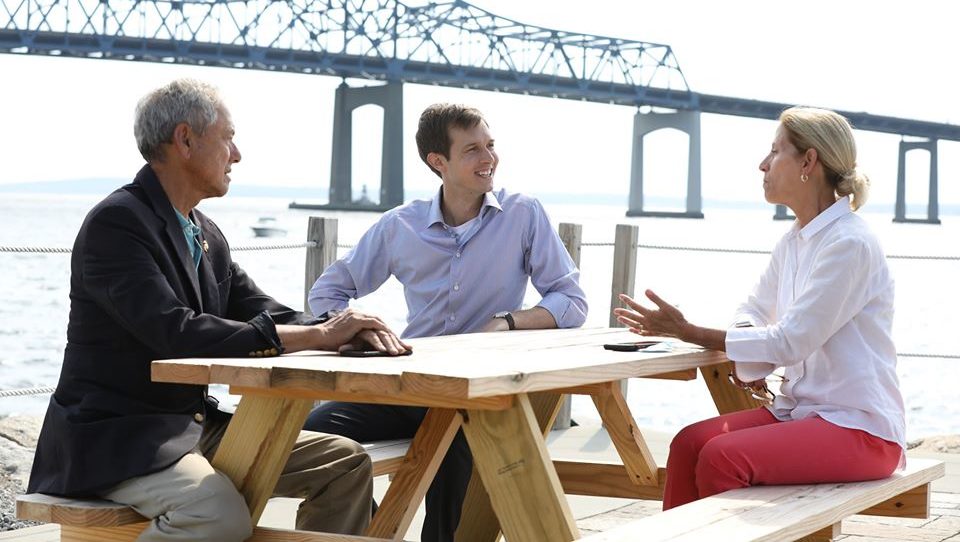 The packed race to replace Rep. Joe Kennedy in the state’s 4th district is getting down to the wire

With less than two weeks until the Massachusetts congressional primaries, the Democratic race in the state’s 4th district remains hotly contested. Recent polls — both publicly released and internal — show just a few of the nine candidates in serious contention for the nomination.

Jake Auchincloss was initially seen as a favorite to replace Rep. Joe Kennedy (D-MA), who is challenging fellow Democrat Sen. Ed Markey for his seat. But the U.S. Marine veteran and city councilor from Newton, Mass. — who received the endorsement of the Boston Globe last month — has faced strong competition from Becky Grossman, another member of the Newton City Council; Jesse Mermell, a former aide to then-Gov. Deval Patrick; and Ihssane Leckey, an activist and former Federal Reserve regulator. Also in the race are City Year co-founder Alan Khazei, attorney and AJC New England board member Ben Sigel, entrepreneur Chris Zannetos and Dr. Natalia Linos.

Despite the crowded field, Auchincloss feels optimistic about his chances.

“We have put together a full district campaign,” he told Jewish Insider. “We have a full district coalition that really reflects what the Boston Globe said about me, which is of all the field, I am the candidate best prepared to represent a district of haves and have nots.”

Auchincloss downplayed the recent polls showing a tight race. “The race is very fluid. It’s competitive. I’ve got a strong field that I’m competing with,” he said. “And what I can control is the message that I communicate to voters.”

Auchincloss’s own polls put him on top, with Mermell and Leckey also giving a strong showing, a source with knowledge of the campaign’s internal polling told JI. A poll commissioned by Leckey’s campaign in early August showed Grossman in the lead, trailed by Auchincloss, with Leckey and Mermell competing for third place. But a poll from the progressive group Data for Progress had Auchincloss and Mermell tied for the lead.

Auchincloss has been dogged by a series of controversies, including criticisms of past statements arguing students should not be punished for flying a Confederate Flag on public school grounds and as well as comparing burning the American flag to burning scripture.

Auchincloss said his views on these issues have evolved, but explained them as misguided attempts to defend First Amendment free speech rights.

“It’s a political maturation, about the healthy tension and the balance between one civil liberty, which is the freedom of expression, [and] the entire portfolio of civil liberties that the Constitution has enshrined,” he said. “There’s a freedom to speak. But there’s also a freedom from fear. And getting that balance right is an ongoing national project. It’s not one I would ever claim to fully have fully figured out. I don’t think this country has fully figured it out.”

While some of Auchincloss’s opponents, including Mermell, have defended the rights of those who support the Boycott, Divestment and Sanctions movement against Israel on First Amendment grounds, Auchincloss has taken a harder line against BDS.

“I certainly support the constitutional right of people to express criticisms of Israel,” he said. “But at the same time, I recognize that BDS as an institution targets the Jewish people, targets Israel and harasses those who have pro-Israel views.”

Auchincloss disputed claims by some of the other candidates that anti-BDS legislation is inherently a violation of free speech.

“That argument does not stand up to other legislation that the United States has passed to protect historically vulnerable communities,” he said. “And it does not recognize that BDS as an initiative is really targeting one community, targeting one state and doing it without any basis in facts… This is a targeted campaign of harassment.”

Auchincloss has also taken heat for registering to vote as a Republican for a several-month period in 2013 and 2014, and working to help elect Republican Gov. Charlie Baker.

“I’m an Obama-Baker voter, like many Democrats in Massachusetts,” he said, though he declined to speculate on whether he’d vote for Baker again, should the governor seek reelection.

As election day draws nearer, there are signs that some of Auchincloss’s opponents are trying to consolidate efforts to defeat him. Dave Cavell, a former White House speechwriter, dropped out of the race late last week and threw his support behind Mermell, in an attempt to block Auchincloss from gaining the nomination. Upon leaving the race, Cavell lambasted Auchincloss as “unfit to represent the district.”

Like some of his opponents, Auchincloss expressed concern that the wide candidate field could result in a situation in which a candidate picks up the Democratic nomination with less than 20% of the Democratic primary vote.

“I was a strong early supporter of [Ranked Choice Voting] for precisely this reason,” he said. “Our primary system in this state is not effective.”

Political activism is a long tradition in the Auchincloss family. His maternal great-grandparents were Jews who fled pogroms in Ukraine before WWI, settling in Chelsea, Mass., where his great-grandmother became involved in local politics.

“My great-grandmother was a fearsome on-the-ground organizer in 1920s Chelsea, holding a series of mayors to account at a time before women were really allowed to participate actively in politics,” he said.

While the Auchincloss name is Scottish and Episcopalian, Auchincloss himself was raised Jewish.

On the campaign trail, he frequently repeats the story of his maternal grandfather — “a skinny, 17-year-old Jewish kid,” — who joined the Marine Corps during WWII. But he emphasized to JI that he sees this story as intrinsically intertwined with the atrocities Jews suffered elsewhere at the time.

“The horrific backdrop to that story is, of course, the Holocaust. The idea that there were Jews throughout the world who were not so fortunate as my grandfather to be able to grow up in Chelsea,” he said. “And always lurking behind this heroic story of the American dream is its grim counterpart of the absolute imperative for Jews to control their own destiny in the world.”

Auchincloss said his Jewish upbringing has impacted his political priorities in a number of ways, including leading him to focus on improving education programs on the Newton City Council.

“One thing that the Jewish community prizes [is] education and prizes science. I was raised in a household that held education and science in the very highest regard,” he said. “It was simply expected that one would use science to guide your decision-making, and also that one would do one’s utmost to excel in education.”

“I think being a Jew does make me appreciate, as well, the imperative to create a welcoming and inclusive body politic and society,” he continued. “Jews are always going to be subject to discrimination. And we as a people know that when society at large looks for a scapegoat, it’s oftentimes Jews who get picked. And so it’s made me acutely aware that all marginalized communities deserve to have their voices heard and deserve to feel fully welcomed and included in our civil processes.”

Constituents in the Jewish community who have known and worked with Auchincloss praised his work as a local politician, highlighting qualities they said would make him an effective congressman.

Auchincloss told JI that Alan Leifer, a longtime AIPAC member in the New England area, has been an “important mentor” to him on U.S.- Israel issues.

“I’ve had the opportunity to build relationships with many members of our New England delegation,” Leifer told JI. “I talk to them all the time about these issues, and I could see Jake was absorbing these issues, thinking about them at the same kinds of caliber as most of our existing Massachusetts delegation has.”

Auchincloss also named David Goodtree, a Boston-based investor who worked extensively in Israel, as a mentor on topics related to U.S.-Israeli economic partnerships.

Leifer praised Auchnicloss for leaving behind a potentially lucrative career in business to pursue public office, and highlighted his extensive door-knocking efforts during his city council campaign.

“I personally am tremendously impressed by young people who dedicate their lives to public service when they have so many options in life for doing things,” Leifer said. “And the bravery and courage to step out and join the Marine Corps and fight for our country in a very messy time is something that I appreciate in Jake’s background.”

Evan Falchuk, who ran on a third party platform for governor of Massachusetts in 2014 and has collaborated with Auchincloss on ranked choice voting advocacy, also praised his political accomplishments on the city council.

“There’s a lot of people [in politics] who are willing to cut corners in order to be successful. Jake is someone who wants to do the hard work of building relationships… building bridges, finding common ground on issues,” he said. “ I just find him to be an intellectually curious, thoughtful person, and that’s something that I just value greatly from him.”