Despite expressing support for BDS in a survey, Leckey said during webcast that she refuses to be ‘pigeonholed’ 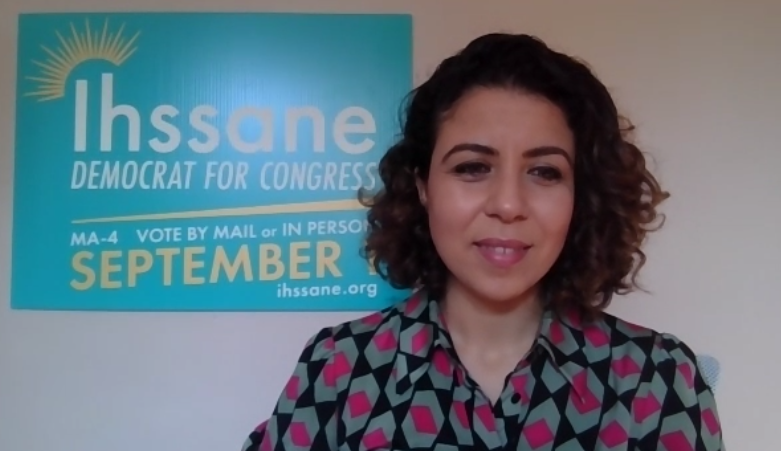 Ihssane Leckey, a Democratic congressional candidate in Massachusetts’s 4th district, took a hard line on Israel in two candidate surveys for progressive organizations, but but attempted to qualify and walk back her positions on issues like BDS and visiting the Jewish state in her first campaign event dedicated to Jewish voter outreach Monday night.

In a survey for the Boston chapter of the Democratic Socialists of America, Leckey said she supports the Boycott, Divestment and Sanctions Movement, but clarified in a later section of the survey: “I support the ending of the Israeli oppression of the Palestinian people, including supporting the BDS (Boycott Divestment Sanctions) movement, but do not support sanctions.”

And in a separate survey for Massachusetts Peace Action, Leckey said she opposed anti-BDS legislation, including last year’s anti-BDS bill, HR-246 and expressed support for a bill barring U.S. funds from being used to support the detention and mistreatment of Palestinian children by the Israeli government. Leckey also said she would not participate in the Israel tour offered to first-term members of Congress by the AIPAC-affiliated American Israel Education Foundation.

She also pledged to “refuse donations/sponsored gifts from the pro-Israel lobby.”

“Ihssane supports Palestinians’ right to health, safety, liberty and self-determination, and will strongly oppose attempts to silence BDS or any other form of protest,” her campaign added.

But during Monday’s event, Leckey adopted a different tone on BDS. She told listeners that she “will not be pigeonholed into that box of ‘yes’ or ‘no,’” on the issue of the Boycott, Divestment and Sanctions movement, and expressed objections to the BDS question on the DSA survey.

“We know that there has been so much divisiveness within the Jewish community because we spend so much time talking about ‘yes’ or ‘no’ instead of talking about the issue itself and how we’re going to resolve it,” she said. “I always said I will not stand against a peaceful protest. I will not stand against people coming peacefully and asking for something that they believe that is the right way to get things done.”

In an email to JI, Josh Miller-Lewis, a spokesperson for Leckey’s campaign, said the DSA questionnaire “does not accurately reflect her position.”

“DSA removed the second part of her answer which is that she opposes sanctions. This is a complex issue that requires nuance and cannot be simply answered with a yes or no,” Miller-Lewis said. “Any attempt to remove nuance and shut down dialogue does a disservice to this issue and the fight for justice for both the Palestinian and Israeli people.”

During the event, Leckey also said she would “love” to visit Israel, as well as the Palestinian territories.

Leckey said she believes the U.S. could play an important role in the peace process by promoting democracy in the region.

“We need to be promoters of peace,” she said. “We have to make sure that people have the democratic process to choose for themselves. The Israeli people and the Palestinian people should have a safe democratic process to vote and decide on how they want to solve their problem. And our role would only be to be a facilitator.”

On the call, Leckey framed herself as a longtime opponent of antisemitism and an ally of the Jewish community, referencing a story from her childhood in Morocco. Some of her friends at the time, she said, had planned to “do bad things” in a Jewish cemetery across the street from her home.

“I knew that was not right. I knew that taking care of the Jewish cemetery was sacred. And so I spoke with my mother and she went and spoke to the children and her parents. And we were able to clean it up,” she said. “We were able to bring everybody together to understand that we live in an interfaith community, that we respect each other, and that it’s important, both in the Muslim and Jewish faith, that this friendship is to be respected and needs to be forever.”

But Leckey has faced scrutiny from some in the district, including for — until very recently — a relative lack of engagement with the Jewish community compared to other Democratic candidates. In addition to being endorsed by Rep. Ilhan Omar (D-MN), Jewish Voice for Peace and IfNotNow Boston, Leckey has received the support of controversial Women’s March co-founders Bob Bland and Linda Sarsour.

The candidate said she believes some of the criticisms she has faced have been motivated by her identity.