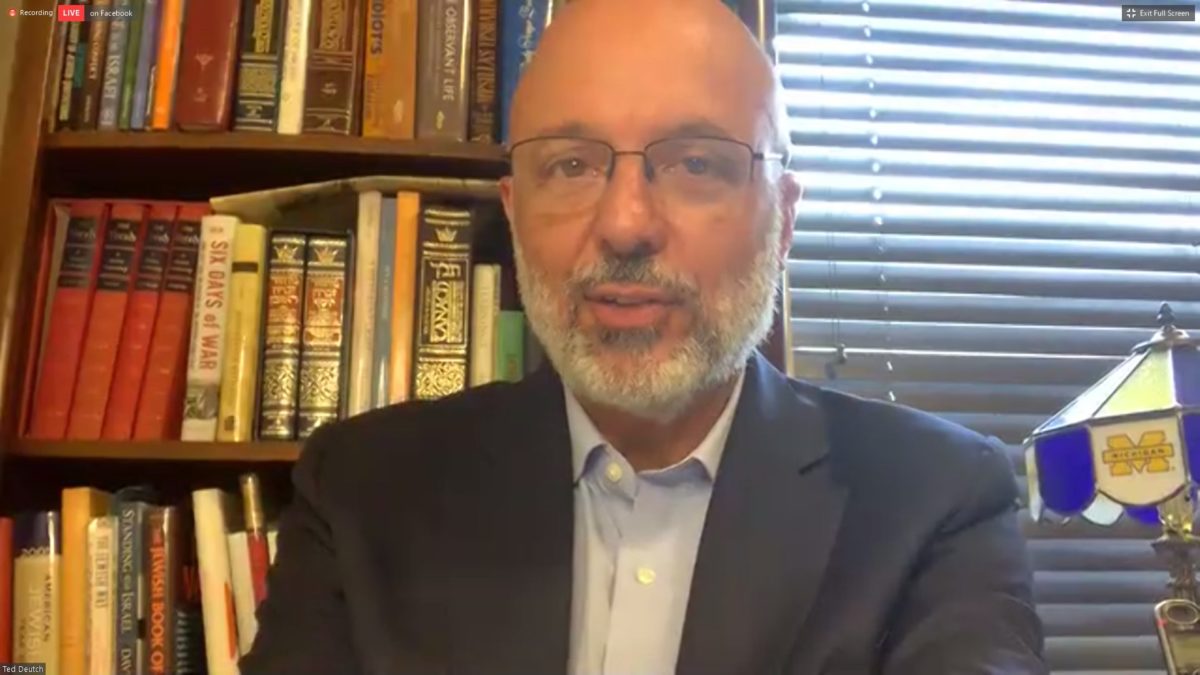 Rep. Ted Deutch (D-FL) cautioned the Israeli government on Tuesday against moving ahead with plans to unilaterally annex portions of the West Bank ahead of the November U.S. presidential election.

Don’t speed: Deutch, speaking on a webcast hosted by Israel Policy Forum, said the move could have long-term implications. “We have seen some of the quotes about the seeming urgency of moving forward because President Trump might not get re-elected. That’s not how you make decisions that impact both the long-term security needs of Israel and the long term bipartisan support for the U.S.-Israel relationship,” the senior Democrat stressed. Presumptive Democratic presidential nominee Joe Biden said last month that annexation would “choke off any hope for peace.”

Room for debate: Deutch reassured the pro-Israel community that the Democratic Party’s opposition to unilateral annexation should not strain ties between the U.S.and Israel. “We shouldn’t let the U.S-Israel relationship be determined solely on this issue. It’s about so much more than that,” Deutch emphasized. “We can’t ignore this, and as Israel is thinking about moving ahead here, it’s important, I think, for us as supporters of Israel to raise some of these issues.”

Keep the blueprint: Deutch, who serves as chair of the Subcommittee on the Middle East, North Africa, and International Terrorism on the House Foreign Affairs Committee, suggested the Democratic National Committee does not need to include language opposing annexation in the Israel plank of its 2020 platform, which will be released ahead of the party’s nominating convention in August. “What has always been in the platform is strong support for the U.S.-Israel relationship, recognizing the need for it to be bipartisan, stressing the importance of a two-state solution,” Deutch explained. “I think the best place to look for what should be in the platform is what the one Democratic majority in Washington right now has already said — and that’s the U.S. House [of Representatives] — and that’s support for the U.S.-Israel relationship, its support for a two-state solution, that it recognizes the importance of assistance to Israel and it opposes the BDS movement. Congress has spoken on that, the Democratic Party has spoken on that already in the House, and that’s exactly what we ought to see in the platform.”

Pledging allegiance: “The antisemitic comments that were made by some of our new members, that actually spurred a lot of conversations and discussions, not just why certain tropes are antisemitic and why the language is so painful, but more enforced the conversation about the history of Israel and the whole history of our people,” Gottheimer said, adding that the incident led to a “constructive conversation” about U.S. military aid to Israel. “The ‘aha’ moment I’ve had for a lot of people is broadly [that] Israel’s national security is key to America’s national security… And that’s where, despite what some people have said, questioning my allegiance, my allegiance is to the United States of America and to our security.”