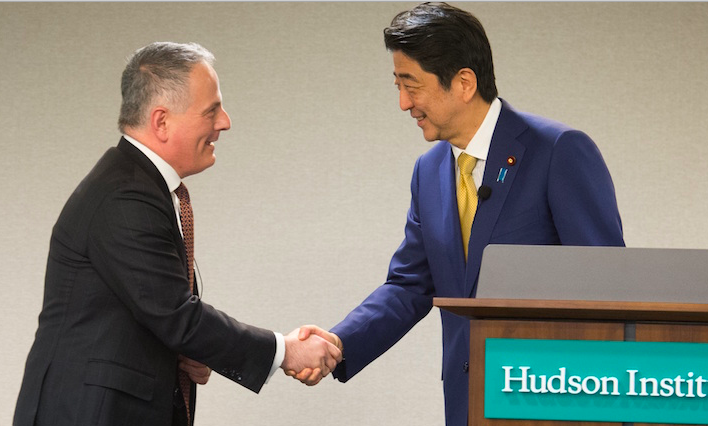 President Donald Trump will nominate Hudson Institute President and CEO Ken Weinstein to be the next U.S. ambassador to Japan, the White House announced on Friday afternoon.

Bio: Weinstein is a member of Kesher Israel Synagogue and a past board president of the Milton Gottesman Jewish Day School in Washington, D.C. He has led the Hudson Institute, a conservative think tank, as the Walter P. Stern Chair since 2011. Weinstein also currently serves as a member of the Advisory Committee on Trade Policy and Negotiations, which provides counsel to the U.S. Trade Representative. In recent years, Weinstein was a frequent visitor to Japan, where he held talks with the country’s leadership. Last summer, he launched Hudson’s Japan Chair and appointed former national security adviser H.R. McMaster to lead the new division.

Familiar face: James Carafano, vice president for the Kathryn and Shelby Cullom Davis Institute for National Security and Foreign Policy and the E.W. Richardson fellow at the Heritage Foundation, told JI on Sunday that Weinstein “has been a tremendous asset bridging U.S.-Japan relations from the beginning of the Trump administration.” Carafano added, “There’s not a better ‘Trumpsplainer’ than Ken, whom I have been with all over the world, not only in Japan, but all over Europe and Asia. I have watched him in action explain U.S. foreign policy in an incredibly objective and constructive way.”

High praise: Michael Makovsky, president and CEO of the Jewish Institute for National Security of America and a personal friend of Weinstein’s, commended the decision. “There is not a better person that I know in Washington or elsewhere that is more qualified for the job, Makovsky told JI. “He’s a tzadik [a righteous person] in my opinion. I was very happy to see the appointment on a personal level, but also as a professional appointment to an important country.”

D.C. whisperer: Both Makovsky and Carafano highlighted Weinstein’s close connections with the foreign policy community in Washington and foreign officials, and shared their own experiences working with him. “I find him as a terrific counselor for a number of people,” Makovsky said. “I think the world of him. My only regret is that he’ll be almost 7,000 miles away, but he’ll represent our country stupendously.”

Gracious host: Makovsky consulted with Weinstein before joining JINSA, he told JI. “In fact, it was due to his encouragement that I even interviewed for the job,” he said. Makovsky also shared a personal story about Weinstein, “When I wanted to have a small Jewish wedding with my wife four years ago, I called him to see whether we could hold it at the new Hudson office, which I heard was lovely and spacious, and he said, ‘Come right over.’ We held our wedding there and he and his staff could not have been more hospitable.”

Right man in the right place: Carafano described Weinstein as “a dedicated selfless proponent for America’s interests around the world,” who has a personal relationship with Japanese Prime Minister Shinzō Abe. “It’s a particularly good time for him to be there and they will have a great deal of confidence in the administration in having Ken there as somebody who understands the bilateral relationship and how to keep it moving forward.”