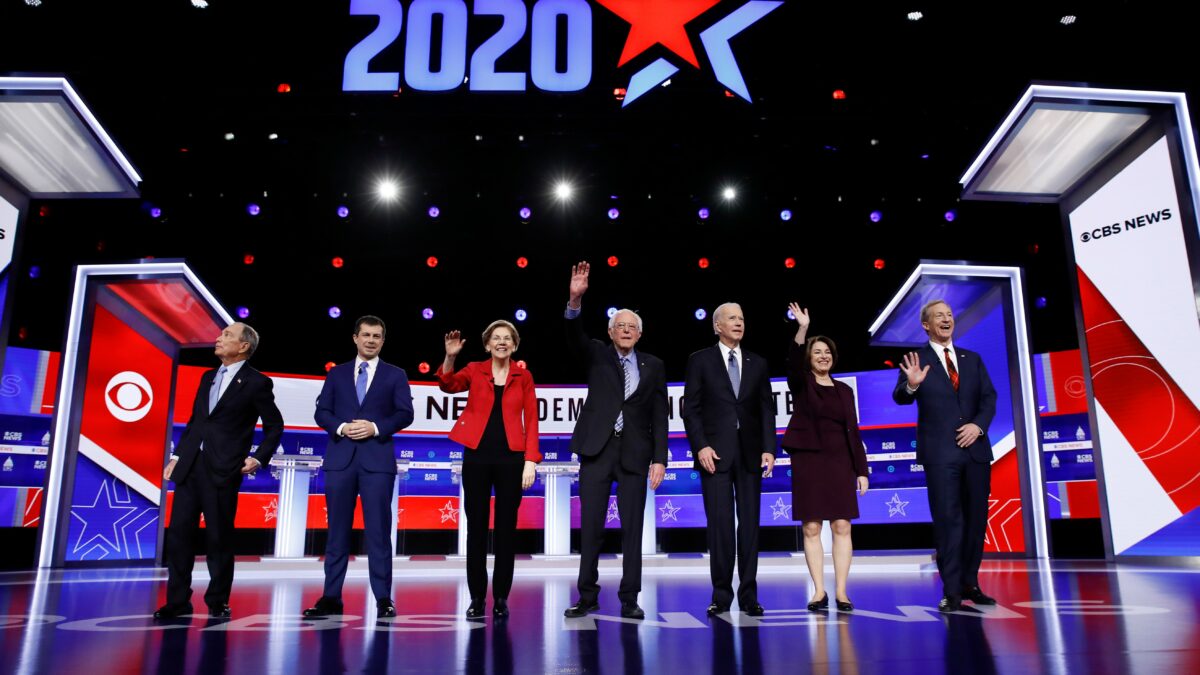 Sen. Bernie Sanders (I-VT) came under fire from all of his rivals seeking to slow the frontrunner’s momentum, while Sen. Elizabeth Warren (D-MA) directed most of her barbs at former New York City Mayor Michael Bloomberg at the debate in South Carolina last night. Having adjusted expectations following an underwhelming first debate performance, Bloomberg struggled to convey some of his messages last night, stumbling at times, including on a question about Israel.

Missed opportunity: Bloomberg kicked off the debate with an attempt to define Sanders as a Kremlin favorite and unelectable. He also made a more effective case defending his record as mayor and pushed back against many of the attacks against him. But Bloomberg, seeking a boost heading into Super Tuesday, missed a unique opportunity to draw a stark contrast with Sanders on his approach towards Israel.

Embassy debate: Asked if he would move the U.S. embassy back to Tel Aviv from Jerusalem, Sanders said that it “would be under consideration.” Dodging a question on his recent comments about AIPAC, Sanders escalated his attacks against Prime Minister Benjamin Netanyahu, calling the Israeli leader a “reactionary racist.”

History lesson: Asked to weigh in on the issue, Bloomberg gave a reply that was met with criticism. “Well, the battle has been going on for a long time in the Middle East, whether it’s the Arabs versus the Persians, the Shias versus the Sunnis, the Jews in Israel and the Palestinians, it’s only gone on for 40 or 50 years… The real problem here is you have two groups of people, both who think God gave them the same piece of land,” Bloomberg said. “And the answer is to obviously split it up, leave the Israeli borders where they are, try to push them to pull back some of those extra on the other side of the wall, where they’ve built these new communities, which they should not have done.”

When asked about the embassy location, Bloomberg said, “You can’t move the embassy back.” But he suggested that moving the embassy from Tel Aviv, without getting something in return from the Israeli government, was a mistake.

Lost debate prep memo: Bloomberg’s Twitter account, however, issued a more direct response to the AIPAC question while the candidate was still on stage. “To characterize AIPAC as a racist platform is offensive, divisive, and dangerous to Israel — America’s most important ally in the Middle East — and to Jews,” @MikeBloomberg tweeted. “How can Bernie profess he’s the path to unity when he’s already managed to polarize a people and a party?”

Feisty night: After a lackluster showing last week, former Vice President Joe Biden delivered a stronger performance last night, going on the attack against Sanders over his past gun votes and his support for Fidel Castro. Former South Bend Mayor Pete Buttigieg also landed a series of jabs against Sanders, warning that — if he is the nominee — Democrats risk losing their majority in the House and their chance of taking the Senate.

While it’s unclear who won last night’s debate, it is quite clear that CBS and its debate moderation lost.

Campaign strategists and political observers weighed in on the combative debate, and the testy exchange over Israel policy.

Bernie camp spin: Joel Rubin, Sanders’s director of Jewish outreach, told JI’s Melissa Weiss that the senator’s composure while weathering attacks from the other candidates demonstrated he would be a formidable opponent in the general election. “He stuck to his message, he communicated what he’s all about. He maintained a strong backbone under assault [and] demonstrated what it will take in a prime-time general election debate fight with Donald Trump, with a guy who can really sling from any different angle,” Rubin said. “Bernie, he demonstrated that he could take the heat. He knew it was coming and it came from all directions.” Rubin also weighed in on Bloomberg’s Middle East policy: “His answers made it clear why he endorsed George W. Bush in 2004 and supported the war in Iraq.”

Democratic campaign strategist Hank Sheinkopf maintained that Bloomberg “was very clear about where the embassy should stay,” and has already drawn a stark contrast with Sanders “by showing up at AIPAC — and the Sanders-Sarsour gang don’t show up there.” Sheinkopf explained that both candidates did what they needed to do on the stage. Bloomberg “spoke the truth about Israel,” while Sanders lied about the Gaza war but nonetheless appealed to his base with his “pretty consistent message of punishing Israel.”

View from Jerusalem: Israeli Foreign Minister Israel Katz said Sanders’s response on Israel was a “horrifying comment.” Katz told Army Radio that: “We don’t intervene in the internal American electoral process, which is splendid,” but that “people who support Israel will not support someone who goes against these things.”

Not impressed: Aaron David Miller, a senior fellow at the Carnegie Endowment for International Peace, tells JI that the exchange was the “worst five-minute exchange and discussion of the Israeli/Palestinian issue in [the] history of presidential campaign debates.” Miller stressed that Sanders’s stance on the embassy “won’t move the needle,” since most American Jews will vote against Trump no matter who Democrats put up. “But I can see some Jewish voters not voting if Bernie is nominee because of the perception he’s too pro-Palestinian.” Bloomberg’s viability as the nominee, he said, “won’t turn on the Israeli-Palestinian issues. If this was a campaign for mayor of NYC it would be a different story.”

Biden camp spin: Andrew Weinstein, a member of Joe Biden’s national finance committee, tells JI, “In arguably the most important debate of the primary so far, Joe Biden had his best night. He was authoritative, compelling, and undeniably presidential. He also made it clear that he was the only person on the debate stage who can beat Donald Trump, keep the House under Democratic control, and help to take back the Senate. I expect him to win South Carolina and carry that momentum through Super Tuesday.”

Aaron Keyak, former National Jewish Democratic Council head, emails JI: “What you saw [last night] is exactly the type of conversation that you could see at any Shabbat table in America. These are difficult issues, but Jewish Americans have fundamentally progressive values domestically and internationally — including, particularly, when it comes to the Israelis and Palestinians.”