On The Daily, Rep. Rashida Tlaib talks identity and BDS 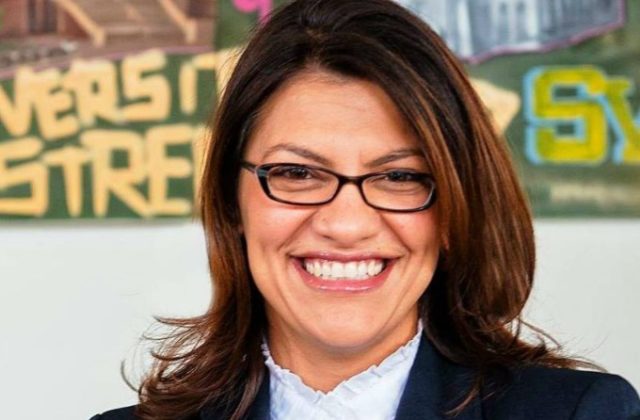 Rep. Rashida Tlaib (D-MI) discussed her views on the Israeli-Palestinian conflict, how her identity informs her politics, and how she first came to support BDS on The Daily podcast with Michael Barbaro, published this morning.

Barbaro: We were just talking about values, not our identities, and then you just said, ‘Well you’ve got to take into account my identity. I have got a grandmother in Palestine.’ I don’t know if you can have it both ways. Do you think it’s some mix?

Tlaib: “I understand why. I am just telling you all, like, for me, I am a very proud Palestinian. I don’t even shy away from it. But when I say certain things, obviously, it’s different layers in there because it’s rooted in racism, it’s rooted in the fact that I am brown, Arab, Muslim, saying Palestinians should be free. I don’t know if any of my other colleagues could say that with them getting maybe targeted. They might get targeted, and I heard some of them have in the past. This is on a different scale, when it comes to Ilhan Omar, especially — going after her, policing her words, policing everything she does. It is a way to discredit her voice, it’s a way to discredit who she is, and they are using her identity, in many ways, to make her words, maybe, weighed less than.”

Tlaib: “I mean it’s painful when people say it. At first, I didn’t kind of believe — it was just a few claims, you know. But then people started writing about it. It started to become like, is this a possibility? And I was like, ‘Absolutely not.’ It is absurd because I am criticizing the state of Israel, just like I do my own country sometimes. It is so that we can promote equality and justice and so forth. There is nothing antisemitic about it.”

Barbaro: So what do you make of it?

Barbaro: They say, we think Rashida is dog-whistling (Tlaib whistles)… I am asking you if you could put yourself into the heads of people who say, here is a very sophisticated person who seems to understand when the other side is communicating something very particular unsubtly, and they may think — they do think — she’s doing that here, Ilhan Omar is doing that too. They are saying this about Bibi Netanyahu. They are talking about dual loyalty. They are using this language in a tweet. Do you have a special obligation to be super careful in your words, and can you appreciate why some people, some Jewish people and their supporters see things that you are saying and think, ‘I think she knows what she is doing’?

Tlaib: “I would never, ever want anything I say to lead to more hate towards those of Jewish faith, and that’s why I am very careful when I talk about that issue. I don’t want people to think this is about Judaism. It isn’t. It is not about that. It is about the same power struggle of the structures that we see even in our own country between those that have and those that don’t. However, I expect the same from those that may be criticizing us — criticize Ilhan and me. I expect them to also be very measured about how they do it so they are not promoting Islamophobia.”

Barbaro: Has the experience you have had over the last 100 days, alongside Ilhan Omar, brought you to a place where it feels like you want to speak out more about this issue, or does it make it feel like you’ve said what you needed to say and maybe now you’re going to switch to other issues that you care about, and maybe be a little bit quieter?

Barbaro: So when your colleagues say that boycotting and divesting from Israel should be much harder to do, that’s when you decided, ‘I am going to support this’?

Tlaib: “I actually came out when I heard that they’re going to move the anti-BDS bill, and the first thing I thought about was all the young people, everybody that I have met that truly believes in economic boycott — but also growing up here, we learned about how economic boycott got us closer to at least a viable civil rights movement in our country.” [TheDaily]