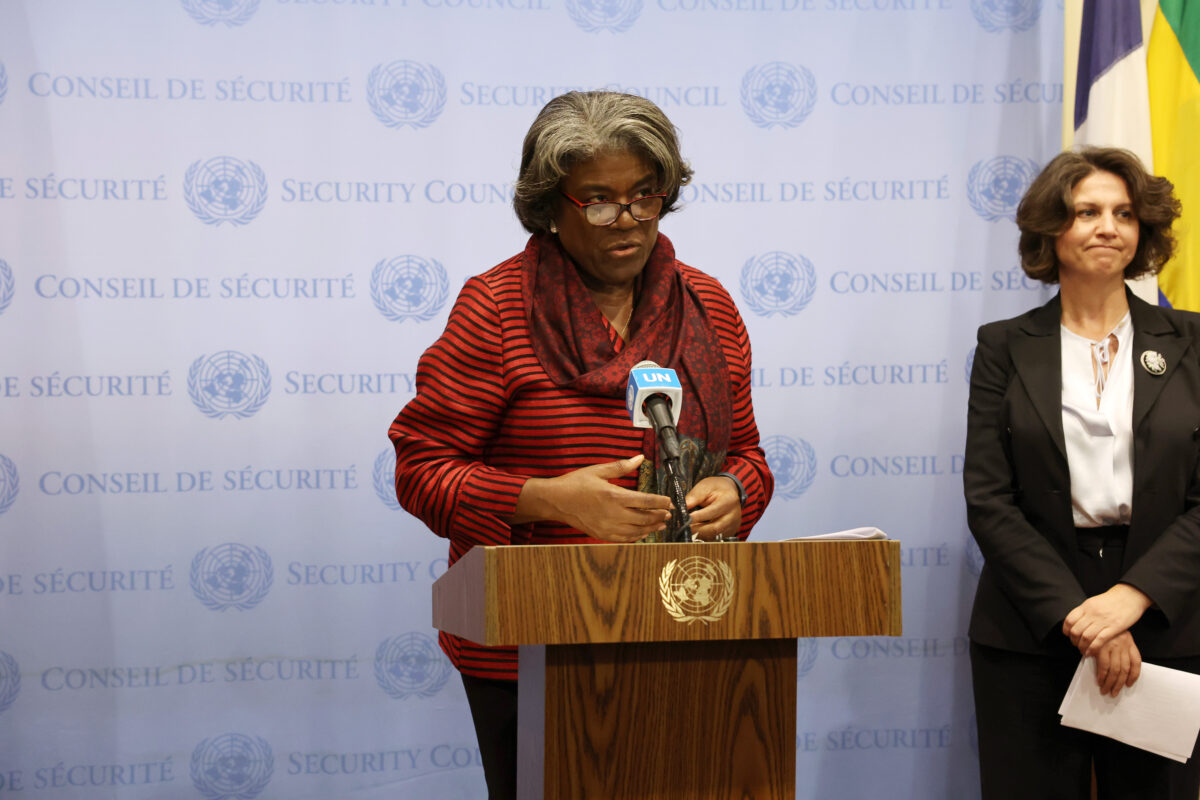 U.S. Ambassador Linda Thomas-Greenfield speaks to the media following a vote at the United Nations Security Council on September 30, 2022 in New York City.

House lawmakers are urging the U.S. delegation to the United Nations to work through the body’s upcoming budgeting process to limit funding to, and ultimately shut down, the U.N. Human Rights Council’s dedicated Commission of Inquiry investigating Israel — a new push in ongoing congressional efforts to scrap the open-ended probe.

A bipartisan group of 49 lawmakers wrote a letter, obtained by Jewish Insider, to U.S. Ambassador to the U.N. Linda Thomas-Greenfield on Tuesday, in which they encouraged “the United States delegation to strongly advocate to restrict this biased commission’s funding from within the UN system, and take steps to eliminate the commission completely.”

The commission was launched in the wake of the May 2021 conflict between Israel and Hamas in Gaza. The letter was organized by Reps. Dean Phillips (D-MN) and Brian Fitzpatrick (R-PA).

The lawmakers note that the U.S. led efforts in 2021 to cut the commission’s budget for 2022 by nearly 25%, and argue that the U.S. delegation should “assemble a coalition of like-minded allies and partners to ensure a timely end to the operations of this commission through the restriction and ultimate elimination of its funding from within the UN system.”

The letter highlights a string of concerns about the commission, referring to its “profoundly problematic” and “incomplete and biased reports,” “numerous antisemitic comments” by commission staffers and the body’s ongoing mandate.

“Respect for human rights is a core American value, and an ideal to which all international actors must be held accountable. That accounting must be done in a balanced manner consistent with international norms, and the U.N. Commission of Inquiry abjectly fails to meet these standards,” the letter continues. “The coming weeks will require the administration to redouble its diplomatic efforts to ensure that funding to this discriminatory investigation ultimately ceases. We stand ready to assist you in any way in defending our democratic ally, Israel.”

The letter comes alongside efforts to defund the commission through the congressional budgeting process. The House Appropriations Committee adopted an amendment to its proposed funding bill for the State Department and other foreign programs seeking to block U.S. funding from supporting the Commission of Inquiry. Congress is seeking to finalize its 2023 government funding legislation in the coming weeks.

However, according to Rep. Barbara Lee (D-CA), who chairs the Appropriations subcommittee on foreign programs, the State Department informed Congress that the U.S. has no ability to specifically defund individual U.N. programs or activities, and the legislation would only cut the U.S.’s overall contribution to the U.N. and not impact the commission’s own budget. The U.S. provided nearly $1.5 billion for the U.N. in 2022.

A standalone bill seeking the elimination of the Commission of Inquiry by cutting back U.S. contributions to the U.N. has grown to 119 cosponsors in the House and 12 in the Senate.