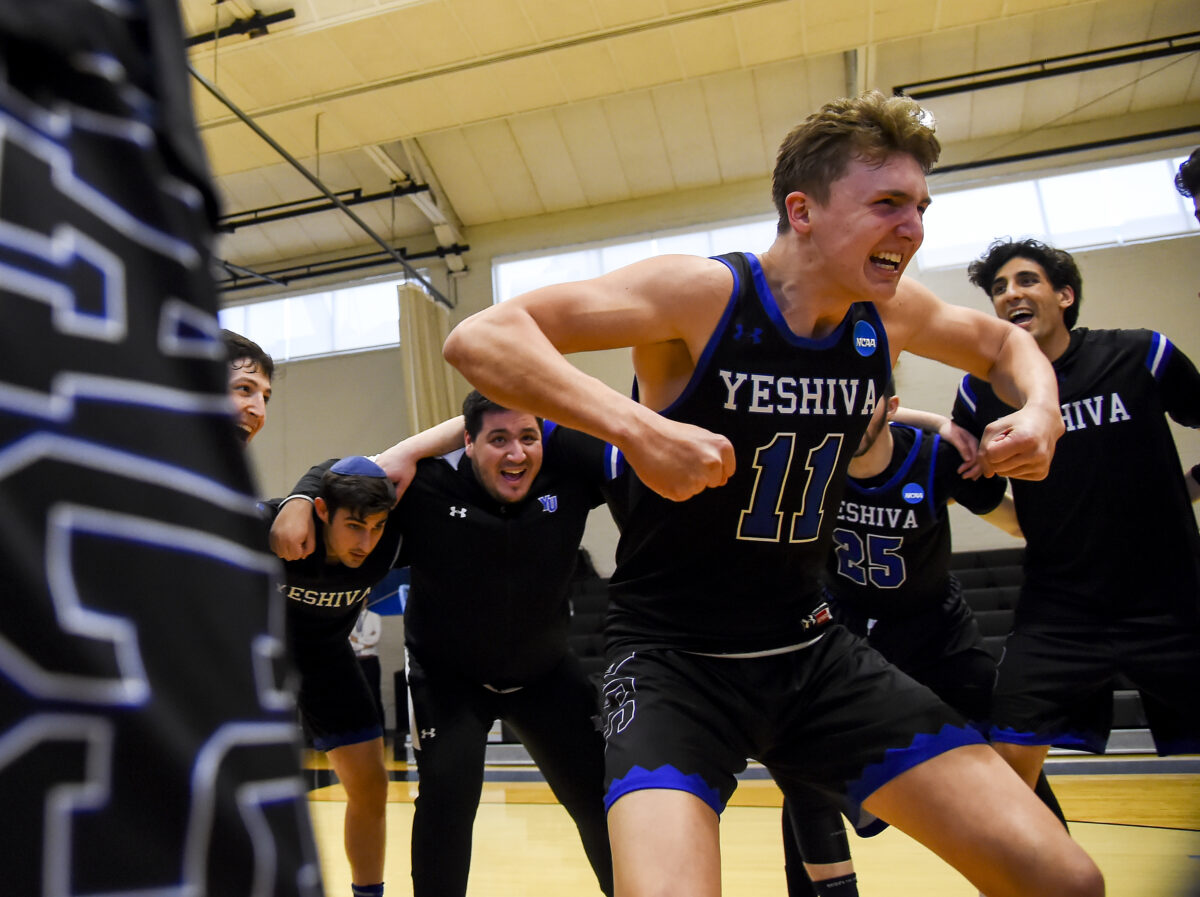 BALTIMORE, MD - MARCH 6: Ryan Turell #11 of Yeshiva pumps up his team prior to playing against WPI at Johns Hopkins University in Baltimore, MD on March 6, 2020. (Photo by Will Newton for The Washington Post via Getty Images)

Having just come from practice last Friday, Ryan Turell sat down for an interview over Zoom wearing a white, Motor City Cruise T-shirt emblazoned with a blue Nike swoosh. It was hard to tell that the former Yeshiva University basketball star was in the process of making history — late last month he became the first Orthodox Jewish player ever drafted to the NBA’s developmental league, the G League, when the Cruise, the Detroit Pistons affiliate, tapped him with the 27th pick.

But the high-scoring 6-foot-7 shooting guard with his signature blonde curls who led the Maccabees to a historic 50-game winning streak during his tenure at YU knows he’s not just any old G League player, at least not in the Jewish community. Turell maintains a strong sense of Jewish pride and says he understands the importance of being a role model to young Jewish athletes struggling to balance their religious convictions and career aspirations.

“I have a platform right now to help inspire Jewish youth and people all over the place that because of their beliefs or religion feel that it’s impossible to achieve their goals or dreams,” Turell, last year’s Division III player of the year, told Jewish Insider ahead of the season opener.

To the outside eye, the Cruise’s selection of a Division III player from tiny Yeshiva University may have come as a surprise. For those who have known Turell, however, it was a foregone conclusion. In a video feature on Ryan by the sports media site Overtime that aired more than nine months ago, a friend of Turell’s named Isaac Cohen predicted that Turell would be drafted with the 27th overall pick. On Sunday, Oct. 22, Turell was in fact selected with the 27th pick of the first round of the G League draft. G League players are often signed by their team’s NBA affiliates or other teams to fill the roster spots of injured players or as a result of their excellent performance.

The unique challenges involved in navigating life in professional basketball as an Orthodox Jew are not lost on Turell, and he credits the Cruise organization for making the transition as smooth as possible. Turell had nothing but praise for his new team, saying, “The Cruise have been really professional and super accommodating, making sure I’ve got kosher food and helping me out and making sure I’m comfortable in the situation.” He plans to stay close to the arena at which the team is scheduled to play on Friday nights and Saturdays so that he can walk to any games or practices that are scheduled during Shabbat.

Detroit is a different setting than Washington Heights, and Turell has made the social shift: Whereas he was previously learning, working and playing alongside Jewish peers, he is now in a professional locker room in which he is the first Orthodox Jew that many of his teammates have encountered.

“I’ve been answering questions every day,” he said. “My teammates have been super into it and super curious and respectfully asking me questions. They’re like hoping they don’t offend me by it, and I’m like, ‘Guys, I’m always ears for questions.’ They’ve been very supportive of it and very welcoming.” In addition to finding a new community of teammates and coaches in Detroit, Turell still keeps a foot in Washington Heights, his home for the last four years, talking with YU coach Elliot Steinmetz on a weekly basis and keeping up to date on the latest developments with the Maccabees.

Turell’s journey to pro ball echoes that of another Maccabee star from two generations ago, Dave Kufeld. The 6-foot-8 All-American center for Y.U. was drafted in the 10th round by the Portland Trail Blazers, becoming what is believed to be the first Orthodox player to be drafted by an American pro team, though he ultimately didn’t make the team.

Turell, who suffered a foot injury and didn’t play in the NBA’s Summer League, is set to make his debut tonight as the Cruise take on the Cleveland Charge in the opener of the first part of the G League season.

And if any Jewish kids dreaming big hoop dreams are in attendance in Cleveland that night, and if they’re doubting those aspirations, Turell has a message for them: “I hope to get that out of their head and show them that it doesn’t matter where you come from, that it doesn’t matter what you believe in, that you can succeed as long as you put in the work.”