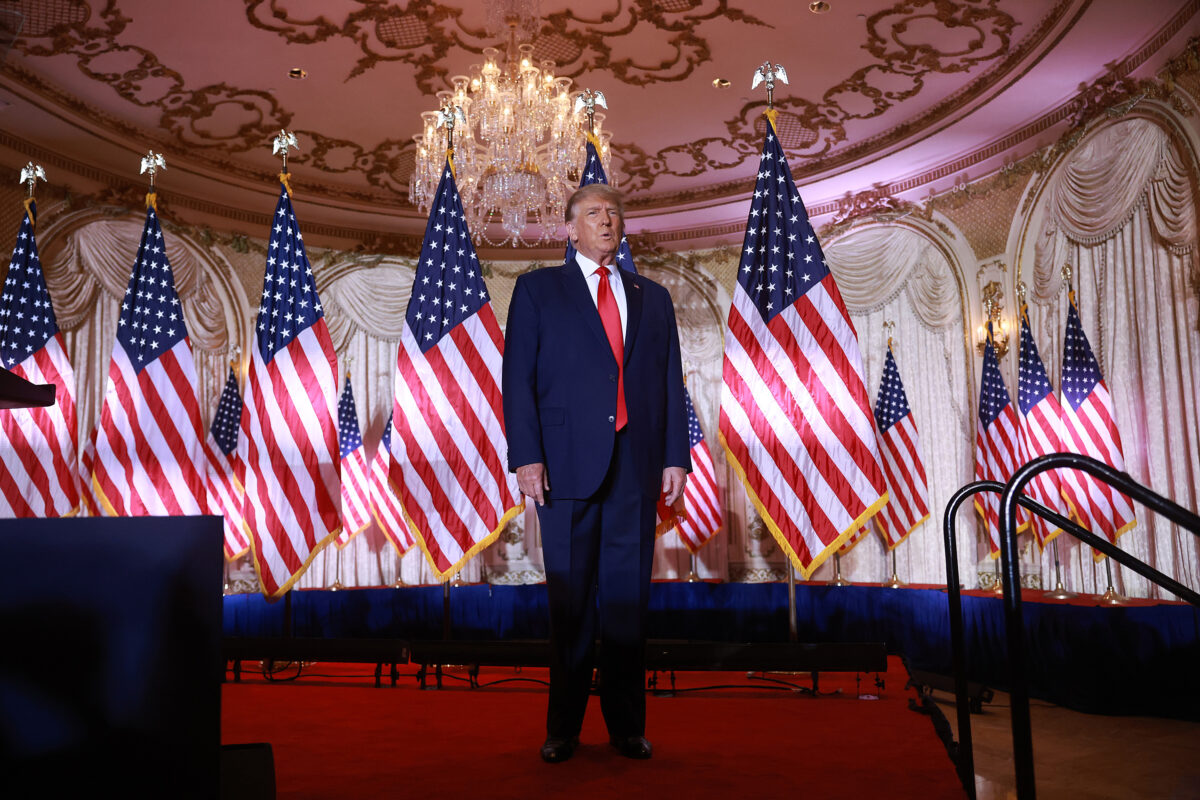 PALM BEACH, FLORIDA - NOVEMBER 15: Former U.S. President Donald Trump arrives on stage to speak during an event at his Mar-a-Lago home on November 15, 2022 in Palm Beach, Florida. Trump announced that he was seeking another term in office and officially launched his 2024 presidential campaign. (Photo by Joe Raedle/Getty Images)

Peppered with questions on the subject by reporters as they returned from the Thanksgiving recess, Republican senators broadly disavowed West and Fuentes and criticized the former president for having hosted the duo. Prior to Monday night’s barrage of in-person questioning, few GOP lawmakers had spoken up about the meeting, which took place last week.

Sen. Mitt Romney (R-UT), a longtime critic of the former president, said, “There is no bottom to the degree to which [Trump] is willing to degrade himself — and the country for that matter. Having dinner with those people was disgusting.”

Sen. Marco Rubio (R-FL) called West “disturbed” and in need of “help,” and Fuentes “evil” and an “assclown.”

“Trump shouldn’t have met with [Fuentes] because it gives legitimacy to a guy who’s a purveyor and a spreader of an evil ideology,” Rubio continued. “He’s an evil guy and shouldn’t be legitimized by allowing him to come into places like that and meet someone like a former and maybe future president.”

Asked by Jewish Insider what it said about Trump that he had apparently welcomed West to dinner, Rubio said, “I have no idea how those people got into that building.”  Rubio added later that he hopes Trump condemns Fuentes.

Caroline Anderegg, a spokesperson for Sen. Tim Scott (R-SC) — who spoke at the Republican Jewish Coalition’s annual meeting earlier this month — told JI in a written statement, “Of course the man [Scott] who’s dedicated his career to stamping out hate and racism thinks it’s a bad idea for anyone to elevate racists or anti-Semites. Senator Scott’s vision for America is rooted in opportunity, optimism, and freedom — standing in stark contrast with the recent comments from Kanye West and the vile rhetoric of Nick Fuentes.”

Scott is viewed as a potential 2024 presidential candidate. Trump announced his own entry into the race earlier this month.

Sens. Joni Ernst (R-IA) and Shelley Moore Capito (R-WV), who are members of Republican leadership both called the meeting “ridiculous.” Capito added that, “we’re all responsible for our own actions” when asked if she viewed Trump himself or his staff as responsible for the meeting.

Some senators, while condemning West and Fuentes and, in some cases, disavowing Trump’s conduct, appeared to offer some degree of cover to the former president.

Sen. Josh Hawley (R-MO) said, “I suppose he can have dinner with whomever he wants to.” Upon followup, he said that he did not want figures who have espoused antisemitism or racism to be part of the GOP, before pivoting to condemning Rep. Ilhan Omar (D-MN) as an “avowed [antisemite]” and urging Democrats to disavow her.

Sen. Lindsey Graham (R-SC) said, “The meeting was bad, he shouldn’t have done it… we shouldn’t give oxygen to people who think this way.” He added, “But again, you know, there’s kind of a double standard about this kind of stuff. And I don’t think it’ll matter in terms of [Trump’s] political future.”

Sen. Tommy Tuberville (R-AL) said, “there’s a lot of other people I would think that he could have met with to help the country be stronger and go more in the right direction, there’s no doubt about that.” Asked if Trump should apologize or condemn West and Fuentes, Tuberville responded, “That’s up to him.”

Sen. John Thune (R-SD), the second-ranking Senate Republican, said that the meeting was “a bad idea on every level,” but blamed it on Trump’s aides. “I don’t know who’s advising him on his staff, but I hope that whoever that person was got fired,” Thune said.

Senate Minority Leader Mitch McConnell deferred a question on the subject to his Tuesday news conference. Sen. James Lankford (R-OK), who co-chairs the Senate’s task force for combating antisemitism, did not respond to a request for comment.

Condemnation was not limited to Republican legislators. In a speech on the Senate floor, Senate Majority Leader Chuck Schumer praised Trump’s “friends and allies” who “are pushing him to do the right thing by condemning” Fuentes, and suggested that Trump “does not seem to have the honor to do it on his own.”

Outside of Congress, former Vice President Mike Pence, who has also been floated as a possible 2024 contender, said, “Trump was wrong to give a white nationalist, an antisemite and a Holocaust denier a seat at the table and I think he should apologize for it.” Former antisemitism envoy Elan Carr called on Trump to condemn “these dangerous men and their disgusting and un-American views.”