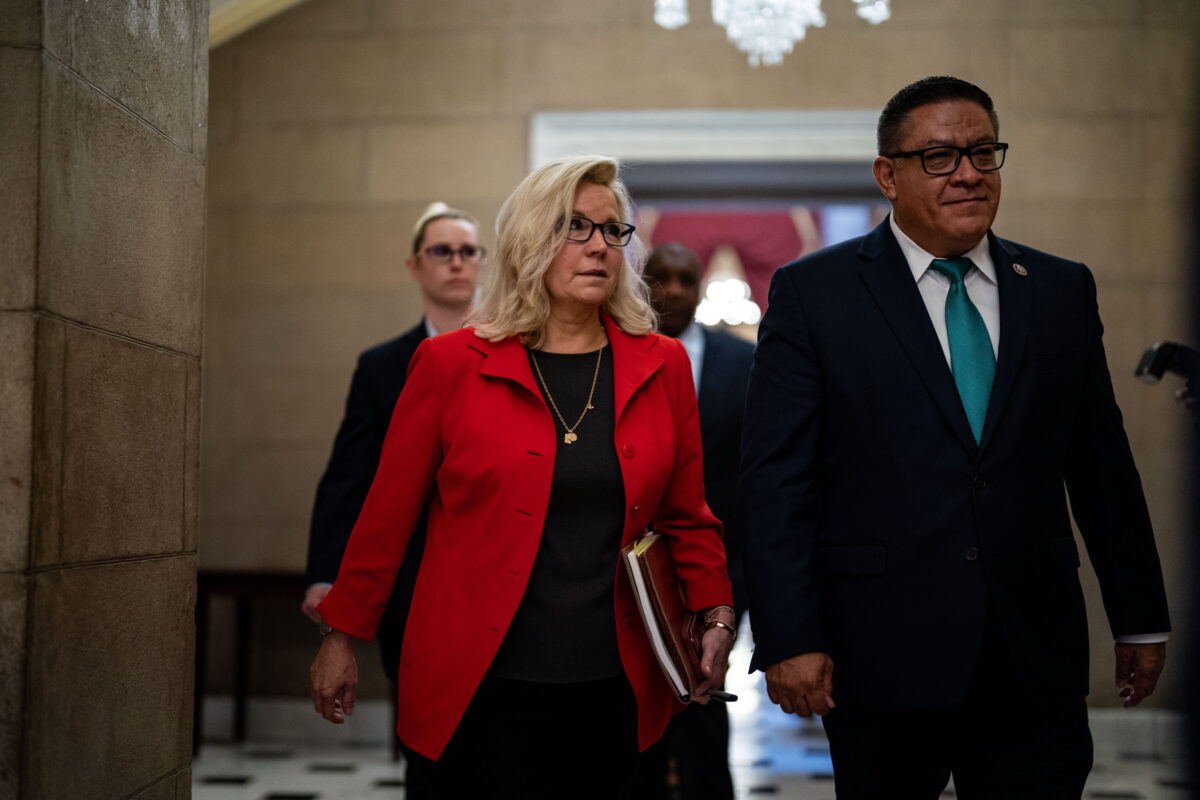 Rep. Liz Cheney (R-WY) walks to a meeting in the office of Speaker of the House Nancy Pelosi (D-CA) on Capitol Hill on Thursday, July 28, 2022, in Washington, D.C.

Rep. Liz Cheney (R-WY), the embattled Republican from Wyoming, has found herself increasingly alienated from all but a few of her traditional allies as she prepares for her likely defeat to a Trump-backed challenger in Tuesday’s primary election.

Last week, however, the 56-year-old congresswoman affirmed her relationship with AIPAC during an hourlong conversation with local members of the pro-Israel group in Jackson Hole, Wyo., months after she had publicly condemned the organization for endorsing more than 100 GOP incumbents who voted against certifying the 2020 presidential election results.

Despite the rare criticism, last week’s meeting suggests that Cheney is committed to preserving her long-standing ties to AIPAC, even as its political action committee delayed in issuing an endorsement of her campaign this spring, fueling accusations that the hold-up was politically motivated.

“It was wonderful to meet with local AIPAC members at the Jackson Hole Jewish Community Center,” Cheney wrote in a Thursday morning tweet from her congressional account. “I will never waver in my support for a strong U.S.-Israel relationship and Israel’s right to defend herself.”

A spokesperson for Cheney’s campaign, Jeremy Adler, declined to elaborate on the meeting, which took place on Monday, Aug. 8, and was closed to the press.

“We appreciate both the opportunity to meet with Rep. Cheney and her strong support for the U.S.-Israel relationship during her entire career in public service,” Marshall Wittmann, a spokesperson for AIPAC, said in a statement to Jewish Insider on Friday.

Wittmann did not address Cheney’s past remarks in which she had argued that AIPAC’s “leadership is playing a dangerous game of politics,” following its first round of endorsements in March.

The group endorsed Cheney’s reelection bid at the end of April.

While Cheney appears to have put her differences with AIPAC aside in meeting with members last week, the subject of her relationship with the group went unaddressed, according to two attendees who spoke with JI.

Instead, the congresswoman “spoke and responded to questions only on the topic of Israel, Israel’s U.S. policy and the Middle East,” said Mary Grossman, executive director of the Jackson Hole Jewish Community, which co-sponsors annual meetings with Wyoming’s three federal elected officials.

“She has a strong personal commitment to the security of Israel and its relationship with the United States,” Grossman explained in an email to JI. “It goes back to when she first went to Israel as a young girl with her parents. And then again on her honeymoon and of course, many times as a political figure.”

Cheney, who has previously spoken at AIPAC’s policy conference, burnished her expertise on Middle East affairs as a senior official in the State Department during the Bush administration, where her father, Dick Cheney, served as vice president.

“She just has so much information,” one attendee, who asked to remain anonymous, said of Cheney, describing the Republican political scion as “very well-versed and educated” on Middle East policy. “We don’t bring up other topics,” the attendee said. “It’s just the relationship between the United States and Israel.”

Even as Cheney fielded questions about the Abraham Accords and affirmed her commitment to defeating Hamas, among other things, the three-term Republican related to the group “that her very first trip to Israel was with her parents when she was 9 years old,” the attendee recalled to JI. “She had not told us that before.”

Beyond foreign policy matters, Cheney also addressed rising antisemitism among elected officials in Washington, D.C., “how it continues to spread” and is “a priority for her to help eradicate,” according to Grossman. “She has a very keen awareness of antisemitism and its pernicious grip on political figures on both the left and the right.”

Grossman did not say which members, if any, were mentioned by Cheney, who has criticized Rep. Marjorie Taylor Greene (R-GA) for past social media comments in which the first-term congresswoman suggested that California wildfires were caused by a space laser controlled by a Jewish banking family.

Cheney, who was one of just 10 House Republicans to vote in favor of impeaching former President Donald Trump, has risen to national prominence as vice chair of the House committee investigating the Jan. 6, 2021, attack on the Capitol.

But her position as a leading avatar of anti-Trump conservatism has put her in fierce conflict with most of her party.

Polling has indicated that Cheney, Wyoming’s lone House member, is trailing far behind Harriet Hageman, a longtime trial attorney and GOP activist in Cheyenne who is endorsed by Trump and has refused to acknowledge that he lost the election.

In late March, more than 100 Republican members of Congress were listed as co-hosts of a fundraiser for Hageman’s campaign, at the Washington, D.C., home of Jeff Miller, a GOP strategist who is closely connected with House Minority Leader Kevin McCarthy (R-CA).

Miller declined to comment on the fundraiser at the time.

The attendee who met with Cheney last Monday said they have “met with” Hageman “with small groups of people, but not with regard to Israel.”

Tim Murtaugh, an adviser for Hageman’s campaign, did not respond to a request for comment from JI on Sunday.

Cheney has raised more than $15 million in her bid for reelection, far outpacing Hageman, who has pulled in roughly $4.4 million, according to the latest filings from the Federal Election Commission.

In a closing campaign ad on Thursday, Cheney doubled down on her commitment to countering Trump’s false claims of election fraud. “If we do not condemn these lies, if we do not hold those responsible to account, we will be excusing this conduct and it will become a feature of all elections,” Cheney said. “America will never be the same.”

The messaging has contributed to speculation that Cheney is weighing a possible presidential run in 2024.