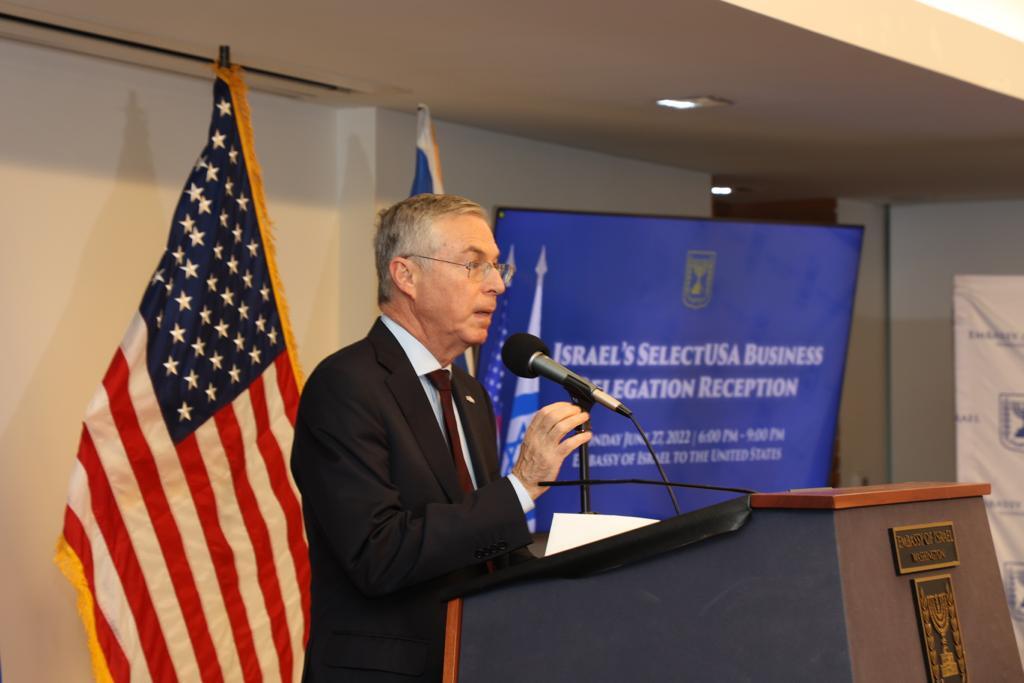 Representatives from more than 40 Israeli companies mingled last night with officials from federal, state and local governments at the Israeli embassy in Washington, D.C., last night, seeking opportunities to expand their businesses into the United States.

The embassy hosted a reception on Monday for the 42 companies selected by U.S. Ambassador to Israel Tom Nides for Israel’s delegation to the Department of Commerce’s SelectUSA summit, which began over the weekend. The conference seeks to promote foreign direct investment in the U.S.

The participants, who spent the evening pitching their businesses to the U.S. officials, included a range of cutting-edge firms, such as a genetics company specializing in livestock, a military and civilian drone manufacturer, a technology company aimed at assisting first responders, clean energy producers and pharmaceutical companies.

“These companies constitute some of the best and the brightest that Israel has to offer,” Israeli Ambassador to the U.S. Michael Herzog said in remarks last night. “This event pays tribute to the close commercial relations that exist between our countries.”

“It is truly worth pausing to appreciate the magnitude of Israeli economic innovation and capabilities,” he said. “Our trade relations are a win-win scenario that demonstrates the synergy between our markets.”

Deputy Secretary of Commerce Don Graves, who also attended the event, praised the “caliber” and the “diversity, the depth” of the Israeli delegation.

“We know just how valuable the relationship between the United States and Israel is. It is a long and deep and abiding relationship,” Graves told the group. “And I believe that our commercial relationship is only set to expand even further.”

Graves noted that Israel’s delegation is the third largest at the summit, and the largest Israeli delegation in the program’s history.

“I think that says a lot about Israel and a lot about the opportunities to create more linkages between our countries,” he continued. “We welcome, most importantly, your partnership because the U.S.-Israeli partnership is not just about commercial opportunities… It’s about a deep friendship, that we will be with each other, we will have each other’s backs, we will stay together, not just for the next 50 years, but for eternity”

Nides was set to speak at the event, but was dispatched early back to Israel to prepare for President Joe Biden’s upcoming visit.