The Pennsylvania GOP gubernatorial nominee once said nothing compares to the Holocaust. He's made those comparisons on topics including election fraud, gun control, abortion and cancel culture 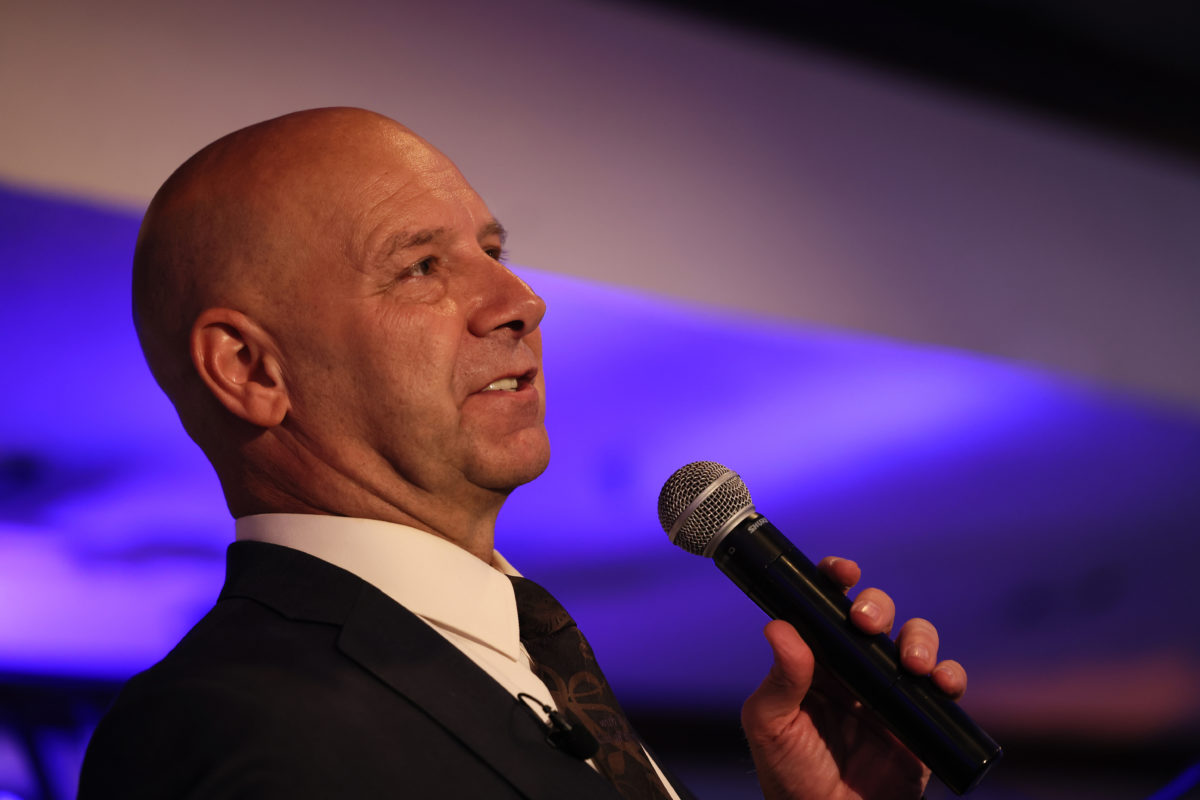 Republican gubernatorial candidate Doug Mastriano gives a victory speech at his election-night party at The Orchards on May 17, 2022 in Chambersburg, Pennsylvania.

Doug Mastriano, a Pennsylvania state senator and the Republican nominee in the state’s gubernatorial race, once wrote that making comparisons between the Holocaust and modern events “betrays one’s ignorance of historic fact.”

Mastriano, a military veteran who has a doctorate in history, shared a post to his public Facebook page in July 2018 in which a Holocaust survivor criticized Democrats who referred to detention camps on the United States’ southern border as “concentration camps,” and wrote that most Americans are “woefully ignorant” of the Holocaust.

“There is nothing to compare it to,” he wrote.

But a review of his past social media posts and public addresses reveals a history of doing just that — comparing the horrors of the 1930s and 1940s in Europe to current political events in the United States, on topics including gun control, election fraud, cancel culture, abortion and the preservation of historical monuments. He also uses overtly Christian terminology as a way to explain American war victories, including the Allies’ victory over the Nazis — a fight to which he compared his fight for “election integrity.”

In August 2019, Mastriano posted a graphic to his public Facebook page — the page, created in January 2018 when he mounting a failed congressional bid, is called “Doug Mastriano Fighting for Freedom” and has 107,000 followers — that compared supporters of gun control to the perpetrators of the Holocaust.

Two images appeared side-by-side, with the caption “#ShallNotBeInfringed #NeverForget #NeverAgain.” One was a photo of shoes left on the lawn in front of the U.S. Capitol that had been placed there by supporters of gun control efforts to memorialize victims of gun violence. The other showed a massive pile of shoes of Holocaust victims that were discovered after a concentration camp was liberated. The first image was labeled “shoes left by supporters of gun control, 2018,” and the second was labeled, “shoes left by victims of gun control, Germany, 1945.”

A Facebook post from February 2021 expressed support for Gina Carano, the star of the Disney TV series “The Mandalorian,” who was fired after sharing an Instagram post that compared the plight of Jews in the Holocaust to modern conservatives who face backlash for sharing their opinions.

A June 2020 Facebook post, shared amid a summer of racial justice protests that led to Confederate monuments being taken down across the country, featured the caption, “Never forget” above an image of Auschwitz. “Over 1.1 million people were murdered in Auschwitz, and it still stands 72 years later,” read the text that appeared underneath the photo. “Why? Because Jews who survived wanted it preserved, as it is a reminder to never let the evil that was Nazism ever happen again. Never tear down memorials!”

Robin Schatz, ​​director of government affairs at the Jewish Federation of Greater Philadelphia, said she does not believe Mastriano’s views comes from a place of antisemitism, but added that he needs to learn why such remarks are problematic.

“I don’t think this is coming from a place of deliberately antagonizing the Jewish community. I think, as with many people, it’s not understanding, and hopefully he will sit down with us sooner rather than later,” said Schatz. She said that representatives of the state’s Jewish federations have been trying to arrange a meeting with Mastriano, whose district in south central Pennsylvania does not have an active Jewish community.

“I think he needs to be educated,” she explained, on “why this language is not appropriate.”

Mastriano, who is Christian, has sparked criticism from the Pennsylvania Jewish community in the past, particularly over his use of Jewish religious symbols in his campaign. At an event announcing Mastriano’s run for governor, a man blew a shofar and wore a tallit, or prayer shawl. A speaker identified as “Pastor Don” told the crowd that the sounding of the shofar — which is used by Jews on the High Holidays — would “blow the breath of God over this place and this people.” Several Jewish leaders wrote in a letter to the editor of Harrisburg’s Patriot-News that they “object to State Senator Doug Mastriano’s appropriation of Jewish symbols.”

The Democratic candidate in the governor’s race, Josh Shapiro, has made his Jewish identity central to his candidacy. A spokesperson for Shapiro declined to comment.

Mastriano, who did not respond to a request for comment, has stood by his use of Holocaust comparisons on at least one occasion.

Earlier this month, after The Forward reported that Mastriano once compared gun control policies to actions Hitler took in the 1930s, Mastriano reposted the video of him making those remarks to his Twitter. “Historically, this is accurate,” he wrote.

Mastriano, who was elected to the Pennsylvania Senate in 2019, is known for his opposition to vaccine mandates, his belief that the 2020 election was stolen from former President Donald Trump due to widespread election fraud and his presence on the grounds of the Capitol during the Jan. 6 riot.

During a speech at a December 2021 “Medical Freedom Rally” in Harrisburg, Pa., Mastriano acknowledged the difficulty of using Holocaust comparisons, but proceeded to use one as a motif throughout his speech.

“As a historian, I’m a little cautious about this next quote I’m going to read you, but please just please bear with me. This is not the 1930s or 1940s, but look at this minor comparison here,” said Mastriano. He told the crowd about Martin Niemöller, the German pastor who publicly criticized Adolf Hitler and author of the famous poem “First They Came.”

“This is what he said. You think about how people are being demonized and isolated in our society at this time — it’s not as bad as what I’m reading to you, but just think about it in this context here, historically. Here’s what Dr. Niemöller says,” Mastriano told the crowd, before reading the poem: “First they came for the socialists, and I did not speak out because I was not a socialist…”

“That’s the importance,” said Mastriano, “of us coming together in this vein at this time, with so many of us being demonized and castigated and judged and condemned and having names called at us the past year and a half here for standing for freedoms.”

Several minutes later, Mastriano returned to the poem when he described the people whom he alleged had been persecuted because of vaccine mandates.

“First they came for the students, then the athletes, then the pilots and then the medical care workers,” said Mastriano. “Suddenly because you want to have a choice, now you’re a villain, you’re going to lose your job? What is going on here?”

Mastriano has long been fascinated by military history. He has written multiple books about World War I, and his most recent — published in 2017 — pays homage to a “devout Christian” who was honored as a hero for his role in the “Great War.”

His writings also express an interest in the period between World War I and World War II, when freedoms were lost and the tyrannical Nazi regime rose in Germany.

In a 2001 master’s thesis, Mastriano warned of a left-wing “Hitlerian Putsch” that will overtake America if the U.S. government puts guardrails in place “to limit the power/influence of the military,” The Washington Post first reported.

He has also compared his own political goals to American efforts to defeat the Nazis in World War II.

In December 2020, Mastriano authored an op-ed in The Mercury, a newspaper covering Pottstown, Pa. Published on Christmas Eve during the weeks-long period in which Mastriano and other Trump allies attempted to overturn the election results, the op-ed placed that fight in the context of pivotal battles in World War II and the Revolutionary War. The article was titled “A Christmas Miracle.”

Mastriano described the apocryphal story of George Washington, then a general in the Continental Army, leading his soldiers across the Delaware River into New Jersey on Christmas in 1776. “The impossible became possible,” wrote Mastriano. “The tide was turning.”

Then, he wrote, “Fast forward to Belgium, 1944. The Nazis were bent on blunting the Allied offensive in the west.” But Gen. George Patton issued a prayer ahead of Christmas 1944 “that would change the course of history,” wrote Mastriano.

“Soon after the prayer, the weather cleared. And not only did the weather clear, but so did the path to victory,” he wrote. “Within days, General Patton counterattacked the German forces.” The result: “The impossible became possible, just as it had in 1776.”

Now, wrote Mastriano, “we are facing political struggles that seem despairingly ‘impossible.’” He described “widespread fraud allegations plaguing our election processes, and election officials afraid of standing up for their country.” The U.S., he wrote, “is facing unprecedented political turbulence.”

He called for the same kind of miracle that helped the U.S. defeat the British two and a half centuries ago and the Nazis nearly 80 years ago.

“I believe that if we prayerfully stand in solidarity, remembering the reason for the season, and the legacy of history that brought us here,” wrote Mastriano, “we may just have a Christmas miracle in 2020.”

In an August 2018 tweet, Mastriano appeared to compare Rep. Rashida Tlaib (D-MI), then a first-time congressional candidate, to Nazis. He linked to an article from a right-wing politics site that claimed Tlaib had stolen the phone of Laura Loomer, a Jewish political activist, under the headline “Palestinian Congressional Candidate ASSAULTS Jewish Journalist at Political Event.”

In the tweet, he also included an image of Nazi propaganda minister Josef Goebbels.

“This sort of evil has been around before,” Mastriano wrote. “Stand against these evil fascists.”

“Adolf Hitler said, ‘I want to raise a generation of young people devoid of a conscience, imperious, relentless, & cruel,’” wrote Mastriano, although the source of the quotation is not clear. “Picture below is what he wanted.”

The image showed a girl stepping on a baby doll, and the caption claimed it was at a pro-choice rally.