More than a year after the passage of the Nita M. Lowey Middle East Partnership for Peace Act, $9 million has been awarded to grassroots private sector and civil society organizations building relationships between Israelis and Palestinians 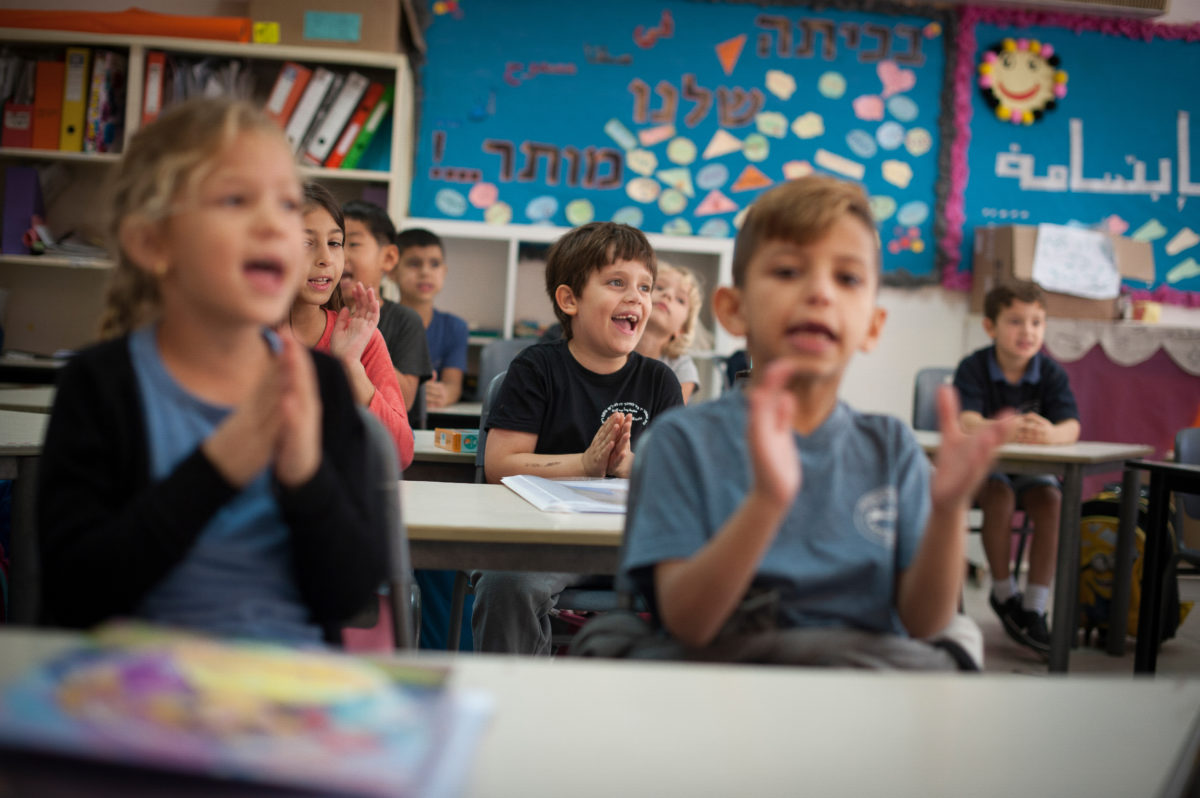 Lessons are taught simultaneously in Hebrew and Arabic to both Jewish and Arab Israeli children at the Wadi Ara Hand in Hand School on October 15, 2016, in Kafr Quara, Haifa District of Israel.

Think back to the heady days of the 1990s, when authoritarian states were crumbling and global politics seemed to be moving in the direction of peace.

Two seemingly intractable sectarian conflicts presented a challenge to that vision. In Northern Ireland, several decades into the Troubles, thousands had been killed and more than 100,000 injured in attacks throughout the conflict. And in the Middle East, the First Intifada continued into the nineties, with Palestinians protesting, often violently, against Israelis.

By the end of the decade, one of those conflicts would be largely resolved with the signing in 1998 of the Good Friday Agreement. The other would be in worse shape than ever — a peace process had started and fallen apart in a matter of years, and its biggest advocate, Israeli Prime Minister Yitzhak Rabin, was murdered by an extremist.

“No two conflicts are the same,” said John Lyndon, executive director of the Alliance for Middle East Peace, a coalition of more than 150 grassroots organizations building ties between Israelis and Palestinians, but there were similarities between the two. And while hundreds of millions of dollars had been invested in bringing together Catholics and Protestants in Northern Ireland through the International Fund for Ireland — which “transformed the civic environment in Northern Ireland,” said Lyndon — no such investment had been made to connect Israelis and Palestinians while their leaders secretly negotiated in Oslo.

“Nobody was prepared for it. Populations hadn’t been socialized with each other to the compromises necessary,” Lyndon said of the Oslo peace process. “Suddenly, the Palestine Liberation Organization was illegal the day before, and the day after Israelis are being asked to entrust their security to it. I’ve heard from Palestinians that had been told that Israelis were occupiers one day and peace partners the next.”

A generation after the collapse of the Oslo process, and with the gaps between Israelis and Palestinians grown into a chasm, a veteran Jewish legislator stepped into the breach. At the end of 2020, Rep. Nita Lowey spearheaded the bipartisan passage of the Nita M. Lowey Middle East Partnership for Peace Act (MEPPA), which allocated $250 million over five years to support organizations on the ground. It was a monumental piece of legislation for Lowey, a 16-term congresswoman from the northern suburbs of New York City, who retired from Congress shortly after the bill was signed.

The legislation passed with bipartisan support and was signed into law by former President Donald Trump. The newly created Partnership for Peace Fund, operated by USAID, began awarding its first grants in March 2022.

“I am an optimist, and I am not — I keep my eyes open. I know the reality of what’s happening there. But I think programs like this do create opportunities for people to know each other, work together and work towards peace,” Lowey told Jewish Insider on Thursday.

The goal of each project supported by the fund is mandated to be the advancement of a two-state solution, said a senior USAID official who spoke on the condition of anonymity to candidly discuss an ongoing project.

In response to a question about whether an organization that works to connect Israeli settlers who do not support a two-state solution to their Palestinian neighbors in the West Bank could be supported through MEPPA, the official said. “While there is some flexibility, and we are looking for creative ideas, any application must be committed to a two-state solution, and also to show how the work that they’re proposing builds that enabling environment.” The purpose of MEPPA is to bring people on both sides closer together so that a two-state solution, when the conditions are right, can work.

Peace has eluded lawmakers, diplomats and presidents from both parties, who continue to be tempted by the prospect of resolving the Israeli-Palestinian conflict. None have succeeded. An initiative led by then-Secretary of State John Kerry in 2013 fizzled the next year; in 2020, Trump’s “deal of the century” proposal was mocked by Palestinians, even as Israel normalized relations with other Arab nations later that year.

In the near term, the outlook for peace remains dim. According to surveys, a two-state solution to the Israeli-Palestinian conflict — long U.S. policy — remains the most popular potential resolution among both Israelis and Palestinians. But the numbers are not overwhelming: Roughly 40% of Israelis and 43% of Palestinians support two states. A one-state solution is less popular.

“If we can improve the daily lives of the Palestinian people, and get the grassroots constituencies in Israel and on the Palestinian side working together to achieve common goals, then I think we will be in a position where a two-state solution will be better realized when the time comes,” George Salem, the board chair of the Partnership for Peace Fund, said at a Jewish Council for Public Affairs conference this month.

The Partnership for Peace Fund advisory board also includes Lowey, as well as officials appointed by members of Congress from both parties. Other members include Dina Powell McCormick, who served on Trump’s national security team; Elliott Abrams, who was Trump’s Iran envoy at the State Department; Rabbi Angela Buchdahl of New York’s Central Synagogue; and Robert Wexler, a former Democratic congressman from Florida and the president of the S. Daniel Abraham Center for Middle East Peace.

The grants awarded by USAID go directly to the recipients. Neither the Israeli government nor the Palestinian Authority (PA) is involved with the Partnership for Peace Fund. Sander Gerber, who was appointed to the advisory board by Sen. Jim Risch (R-ID), said his motivation has been supporting Palestinian civil society in a way that bypasses the PA.

Three grants totaling nearly $9 million have been awarded so far. The first two will go to organizations engaging the private sector: One provides training for businesswomen and creates networking opportunities for Israeli and Palestinian women, and the other will coach Israeli and Palestinian small businesses on building partnerships. But the names of the organizations were not made public by USAID.

“One of the goals of the fund is to try and address the long-standing mistrust between Israeli and Palestinian communities. But that mistrust, it’s still there,” the USAID official said. Those first two groups were taking a risk by accepting the funding and working with Israelis and Palestinians, and the U.S. officials awarding the grant wanted to respect that. “We expect that their experiences will be positive, and that they will be very public and willing, enthusiastic advocates for MEPPA,” said the USAID official.

The third grant will go to EcoPeace to address water security in Israel, the West Bank and Gaza, and to educate young Israelis and Palestinians about working together on the shared threat of climate change. The award was announced by Secretary of State Tony Blinken while he was in Jerusalem in March.

“It was a wonderful moment for the peacebuilding field to see a secretary of state and then seeing the support, platforming their work, alongside Ambassador [Tom] Nides and alongside [USAID West Bank and Gaza] Mission Director [Aler] Grubbs. That’s not usually where civil society sits with regards to elite-level diplomacy,” said Lyndon. “It’s a great manifestation of what MEPPA can be.”

Lowey, for her part, has been pleased by what she has seen so far. “I’m watching it carefully. But this is just the beginning,” she noted. “If you have some success, it breeds additional success.”