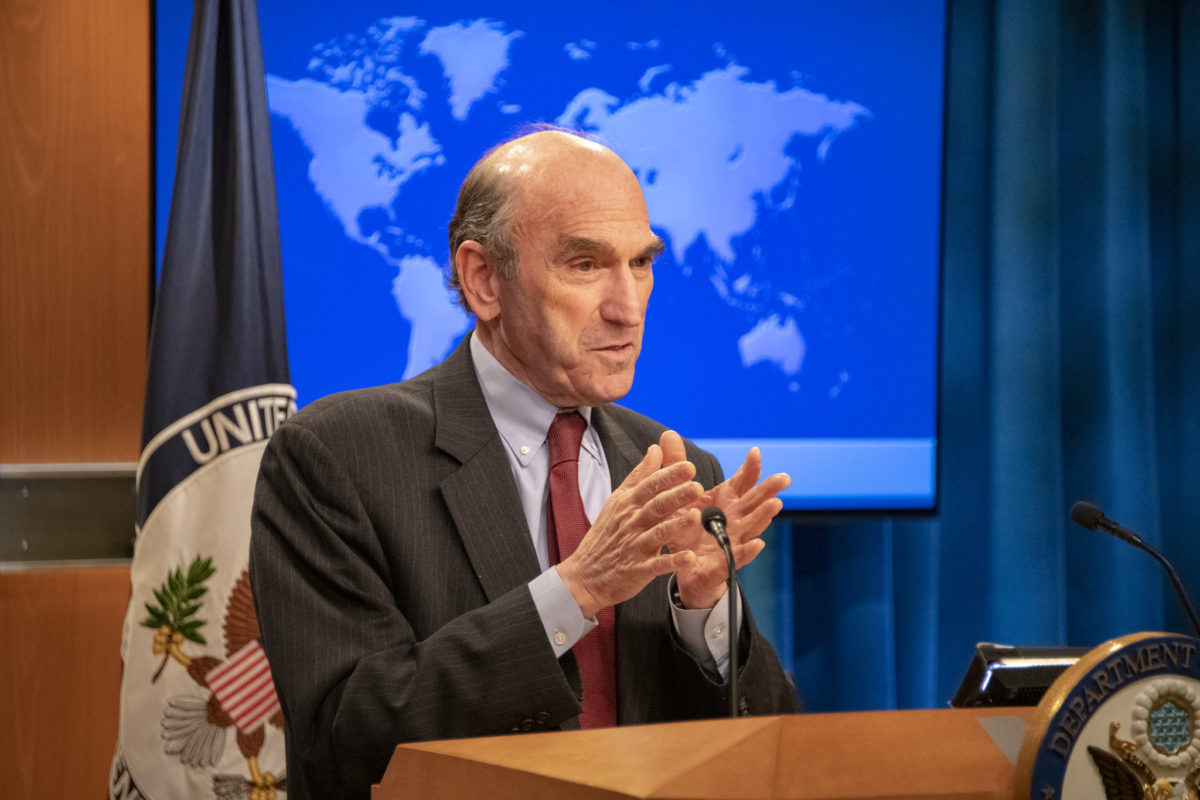 Elliott Abrams, the former special envoy on Iran and Venezuela during the Trump administration and a current fellow at the Council on Foreign Relations, joined Jewish Insider’s “Limited Liability Podcast” hosts Jarrod Bernstein and Rich Goldberg to discuss violence in Israel and negotiations with Iran.

Eye on Israel: “Is it Intifada 3.0? I don’t think so,” predicted Abrams of the current conflagration between Israel and Hamas in Gaza. “I think Hamas has gotten pretty much what it has wanted, and I don’t think that this will turn into another major war in Gaza. And I’m inclined to think things will quiet down a bit in Jerusalem as well.” Abrams suggested that Hamas is motivated at least in part by the cancellation of the Palestinian national elections by Palestinian Authority President Mahmoud Abbas last month. “Mahmoud Abbas cancels those Palestinian elections, and what does Hamas do to show, ‘Well, he’s doing nothing, but we’re here, we’re active, we’re leading the Palestinian people’?” Abrams asked. “They do what you see in the last few days in Israel. A lot of violent attacks.”

Regional turmoil: Abrams said that the violence in Israel puts the Arab countries that recently normalized relations with Israel via the Abraham Accords in a difficult situation. “It does put them in a tough spot,” he said. “And you’ve seen several of them make statements decrying the violence and asking Israel to make sure its police do not, any longer, go into East Jerusalem.” But he added that they ultimately want to see “Hamas defeated — so does Mahmoud Abbas and the PLO, the Palestinian Authority and Fatah leadership, whatever they say, because Hamas is their enemy.” The UAE, Bahrain and other nations are “judging Israel now. They’re wondering how are the Israelis going to handle this? Are they in a kind of crisis where they can’t make decisions? Are they unable to hit back the way they normally would? Is this going to be a defeat for the Israelis? If the Israelis come out of this looking weak, their attractiveness to the Arab governments as a friend is greatly diminished.”

Tehran talks: Abrams rejected the Biden administration’s suggestion that Trump’s “maximum pressure” campaign on Iran failed. “It clearly didn’t fail,” he said. “Our view was that had President Trump won the election, had we been able to face Iran with four more years of the same and actually increasing sanctions, they would have had to make a deal, because of the condition their economy is in right now.” Tehran didn’t make a deal, Abrams suggested, because they were waiting to see who won the 2020 presidential election. Abrams laid out four potential options on Iran: “A successful negotiation with Iran… giving up, finally, the path to a nuclear weapon”; regime change in Tehran; Iran attaining nuclear capability; and the possibility that “someone steps in militarily.” He added: “I don’t think it’s the JCPOA or war. I think it’s the JCPOA or a tougher, better policy.”

Kerry critic: “When you talk to European diplomats, which of course I did, you find that they had—I want to be careful with my language and be diplomatic here—minimum high regard for John Kerry’s negotiating skills. I mean, it’s pretty widely known that the French were near contemptuous of his negotiating skills. For one thing he desperately wanted to deal. That’s obvious. We all know that. So I don’t see any reason to believe that this was the only deal possible. As a matter of fact, if carried out his way, it would have been worse. It’s well known in the State Department that there were moments when Wendy Sherman, for example, or the French, were trying to pull him back from further concessions…it could have been worse.”