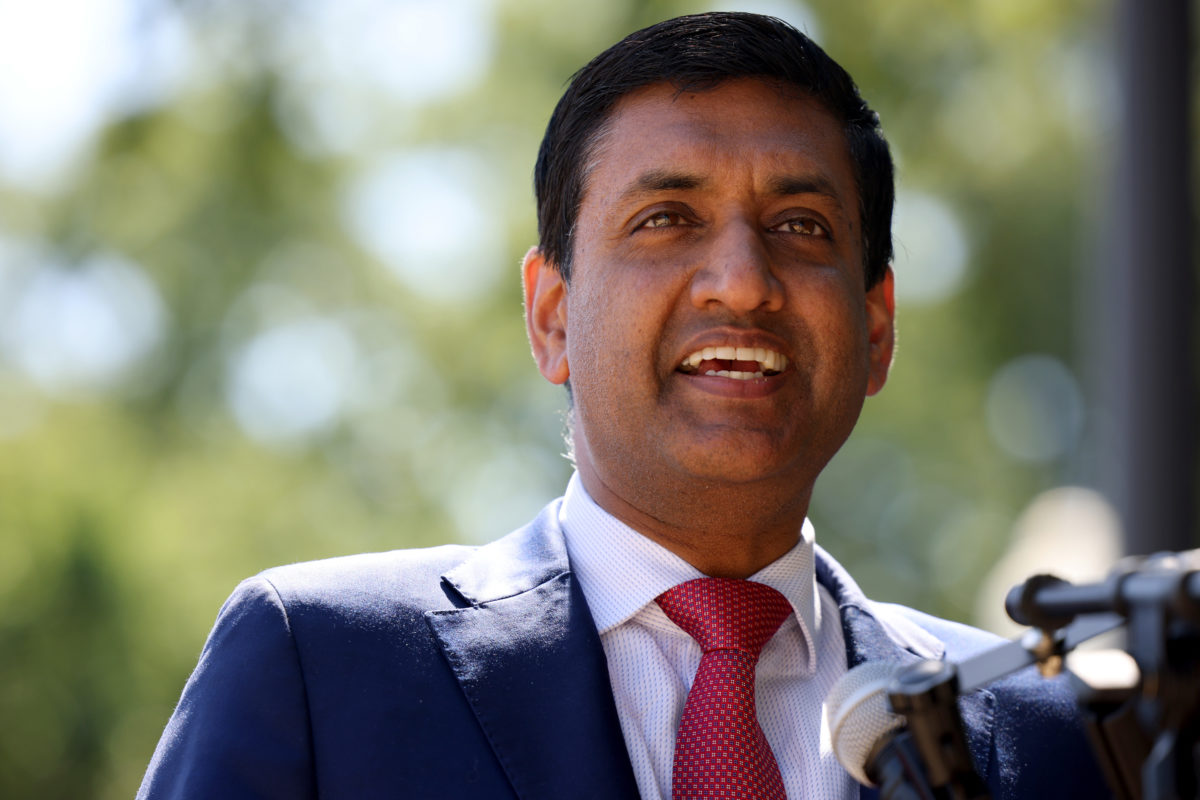 Rep. Ro Khanna (D-CA) speaks at an “End Fossil Fuel” rally near the U.S. Capitol on June 29, 2021, in Washington, D.C. Organized by Our Revolution, demonstrators called on Congress to take action in ending fossil fuel subsidies.

Rep. Ro Khanna (D-CA) said he was encouraged by what he described as a range of productive and intellectually engaging discussions with high-ranking officials last week during a widely publicized congressional delegation to Israel and the Palestinian territories alongside select members of the House Democratic caucus.

“I thought it was a very positive trip,” Khanna said in a conversation with Jewish Insider on Wednesday, recounting his first visit to the region as a congressman. “I was able to build relationships with many people in Israel.”

Led by House Speaker Nancy Pelosi (D-CA), the delegation met with a host of Israeli leaders in the new coalition government, including Prime Minister Naftali Bennett, Foreign Minister Yair Lapid, Defense Minister Benny Gantz, President Isaac Herzog and Transportation Minister Merav Michaeli, whom Khanna praised for her “commitment to progressive politics” as well as what he called a “human rights-based two-state solution” to the Israeli-Palestinian conflict.

The Bay Area representative and leading House progressive also recalled “a great conversation” with Lapid, who expressed familiarity with Khanna’s new book, Dignity in a Digital Age: Making Tech Work for All of Us, which he has likened to Start-up Nation: The Story of Israel’s Economic Miracle, the 2009 book examining Israel’s economic successes.

But Khanna, a 45-year-old former tech lawyer and Obama administration alumnus, suggested he was even more pleased to find that Lapid had read John Rawls’s classic work of political philosophy, A Theory of Justice. “It was an interesting conversation,” he told JI.

Not every interaction was as amiable, even as Khanna described a good-faith “dialogue” with Israeli leadership that nevertheless included some “places of disagreement.” The congressman described, for instance, “a candid conversation with the prime minister” in which Khanna raised “human rights concerns” over “forced evictions” of Palestinians and called for a need “to open up Gaza in terms of economic activity.”

“The prime minister acknowledged that there’s 42% unemployment in Gaza, and that’s unacceptable,” Khanna told JI. “You can’t have 42% unemployment in a society that’s run by Hamas and hope for long-term peace, and I think the prime minister understands that,” he added. “The question is, how can you have an opening there without a risk to security, and it’s a challenge, and I acknowledge that challenge. But I think that’s a place where we can perhaps make progress.”

The Biden administration’s ongoing effort to renegotiate the Iran nuclear deal was also a subject of discussion. “I think there was a recognition that they would respect whatever the United States did,” Khanna said of Israeli officials’ approach to the agreement. The “biggest concern,” he said, “was to make sure that” any resulting deal would not operate on a timeline allowing Iran “to start developing the bomb.”

“I share the view that we should negotiate a strong deal that is as long as possible, and I have great confidence in the Biden administration to do it,” Khanna told JI. “But the tone was much better in terms of respecting the president, respecting the administration. It was a view that was expressed, but it was not in any way confrontational.”

During his time in Congress, Khanna, who assumed office in 2017, has maintained that a progressive foreign policy view, including criticism of Israeli government policies, is by no means incompatible with support for the Jewish state and its long-standing alliance with the U.S.

“I am a believer in the U.S.-Israel relationship, and I think it ought to be grounded on a human rights-based two-state solution,” Khanna said bluntly. “That is what I will be advocating for.”

The congressman’s somewhat heterodox approach has drawn scrutiny both from staunch pro-Israel advocates as well as hardline critics on the far left who have taken issue with, among other things, his decision to vote in favor of a bipartisan resolution condemning the Boycott, Divestment and Sanctions movement targeting Israel.

While in Israel for two days early last week, Khanna faced renewed and intense backlash from an array of far-left antagonists on social media who expressed anger over his Middle East foreign policy positions. 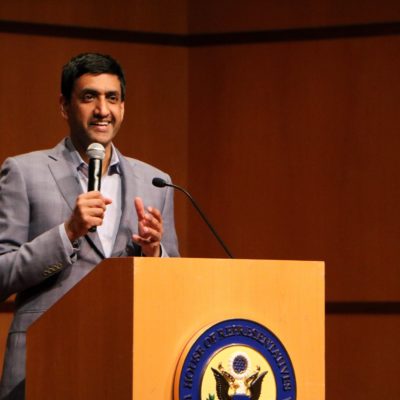 Khanna, however, suggested that he was largely unconcerned with such rebukes. “When I get criticized, I always listen to it if people have a good point,” he said. “I’m always open to it. But I’m not going to back away from my belief that Israel is an ally and in the importance of the U.S.-Israel relationship. That’s a conviction.”

“I am very clear where I stand,” he emphasized, adding: “I believe that there are important economic and technological ties between Silicon Valley and Israel. I believe that the coalition government should continue to work to be as inclusive of all parts of Israeli society and that there has to be a recognition of Palestinian rights.”

“That’s been my view,” he told JI. “I believe that view — and working in the way of building coalitions that I am — will help ultimately in whatever small way I can bring peace to the region.”

The congressman has expressed hope in forging such stability, in part, through Israel’s booming tech sector, and he said he had met with “several folks” at the Technion-Israel Institute of Technology in Haifa for conversations about what he characterized as an “impressive” level of “entrepreneurial and technological innovation” across the country. “Some of them spoke about the joint ventures where Palestinians are being employed or are participating even in joint economic activity, all of which I think are promising places to explore.”

Khanna first traveled to Israel in 2005, before he was elected to federal office, on a trip hosted by the American Jewish Committee’s Project Interchange initiative. “The first trip, I got an appreciation, probably, more of Israeli history and culture,” he said, noting that he had toured holy sites in Jerusalem and “got to bathe in the Mediterranean.”

“This trip was, as the prime minister called it, ‘P to P’: politician to politician,” Khanna explained. “I think I got an appreciation of the difficult political challenges.”

Khanna said he and his colleagues also met with Palestinian officials in the West Bank and described a sense that the leadership was “aware of the need for two states.” He also met with a number of Palestinian students. “I was struck by their desire and dreams for economic opportunity, for opening up Gaza,” he recalled. “One of the students couldn’t participate in person, was on virtually; they couldn’t get permission to meet us, so that was a stark reminder of change that is needed.”

Reflecting in further detail on his observations from the trip, Khanna said he was surprised that a number of Israeli leaders seemed to have placed a particularly high value on forging relationships with progressives who are supportive of Israel. He added that Israeli government officials were well-attuned to the American political scene, where growing Democratic tensions over Middle East foreign policy have caused tension.

As recently as last week, Rep. Jamaal Bowman (D-NY) announced that he would withdraw his support for and vote against bipartisan legislation aimed at strengthening and expanding the Abraham Accords, which established diplomatic relations between Israel and a number of Arab countries, including Bahrain and the United Arab Emirates.

Thanks in part to such relationships, it seems, Israel has reportedly been urging the Biden administration to redesignate the Houthis in Yemen as a foreign terrorist group following a recent series of missile and drone attacks launched by the Iran-backed rebels in the UAE and Saudi Arabia.

Khanna, who has been outspoken on the civil war in Yemen, said he objects to classifying the Houthis as terrorists on humanitarian grounds, suggesting that the designation could impede the delivery of humanitarian aid to the embattled Middle Eastern country.

“The Houthis have not been responsible for nearly the civilian loss of life and the blockade,” Khanna said, arguing that the Saudi blockade of Yemen has been far more damaging. “There is guilt on both sides,” Khanna explained, “but the designation of them as a terrorist organization wouldn’t further peace.”

“Do I believe that the Houthis are engaged in morally wrong behavior?” he went on. “Yes. But the number of casualties, you’ve got Saudis killing tens of thousands of people, and you’ve got a few of these unmanned missiles into Saudi or UAE. They’re wrong, and I condemn them, but they’re not the same scale by any stretch of the imagination, and so what we have to do is condemn the Houthis, tell them to stop, and I believe the way to get them to stop is to have the Saudis stop the bombing and bring an end to the war.”

Khanna said the issue “came up once or twice” during his recent meetings with Israeli leaders. “But not significantly, and the delegation was pretty unified in the perspective I just shared.”