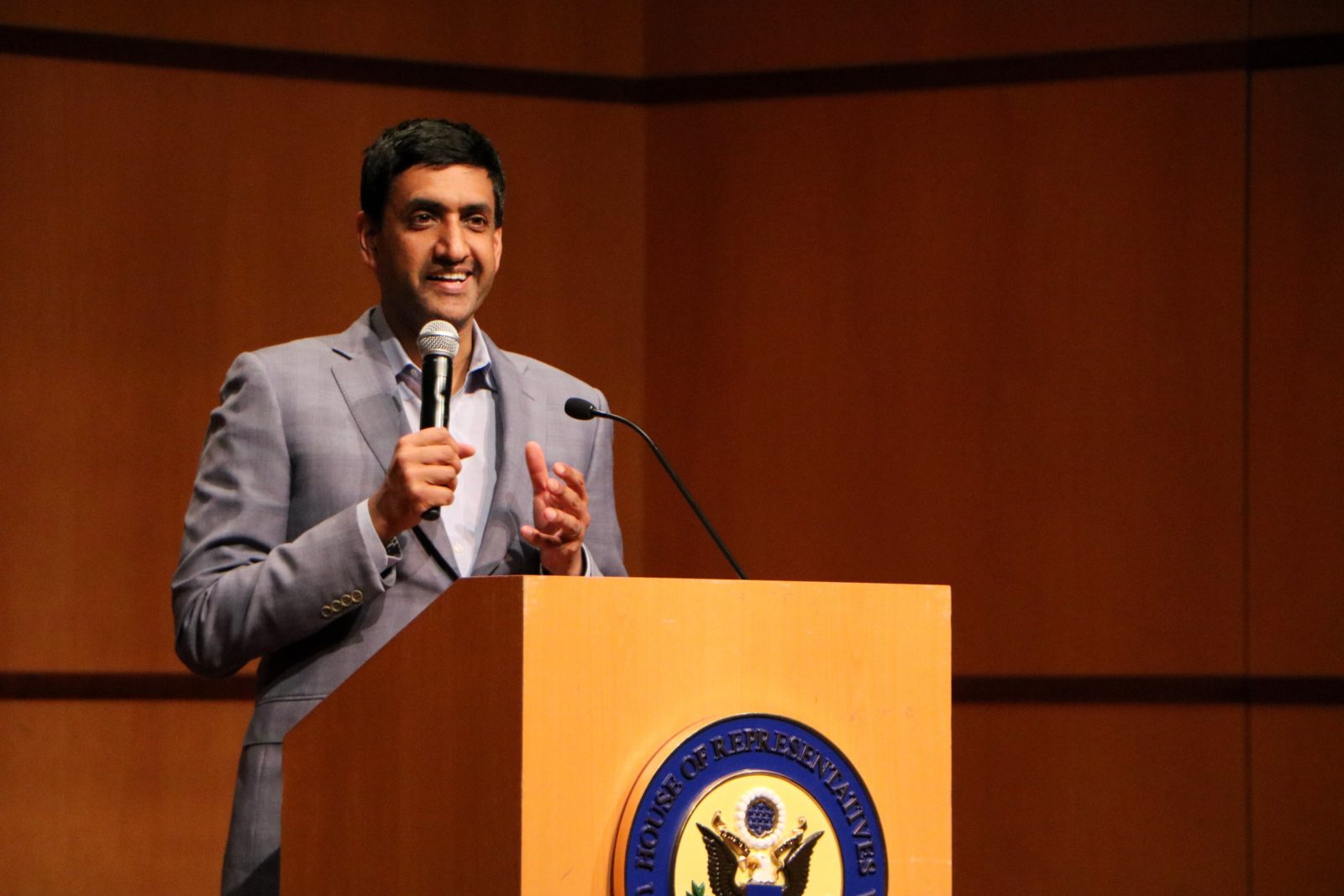 Throughout his time in Congress, Rep. Ro Khanna (D-CA), the 44-year-old Obama administration alumnus and former tech lawyer, has drawn scrutiny from progressives as well as pro-Israel advocates for his somewhat heterodox approach to the Israeli-Palestinian conflict.

In 2019, for instance, Khanna’s decision to vote in favor of a bipartisan resolution condemning the Boycott, Divestment and Sanctions movement earned him a “barrage of criticism,” as he put it, from the left. “It’s probably the thing I’ve been most criticized for on social media in my five years in Congress.” More recently, the congressman came under fire when, in a February interview with MSNBC, he inaccurately accused Israel of “burning down Palestinian villages,” an assertion he later walked back.

“I should have clarified that I was referring to Israeli settlers who have burned Palestinian orchards and the military which has demolished or bulldozed villages,” Khanna wrote on Twitter a day later. “As someone who supports the US Israel relationship, surely we can agree both are wrong.”

Such incidents have no doubt caused more tension than Khanna has bargained for. But the three-term congressman made clear in a recent interview with Jewish Insider that he will continue to speak out as he seeks to engage in what he regards as good-faith dialogue on a contentious issue.

“I don’t pay so much attention to the noise of politics, as long as you’re consistent in your convictions,” he said in a phone conversation. “I do think that it’s important to speak precisely, and if there are times where any facts or things have been imprecise, I always make the effort to correct the record, because it’s such a sensitive issue.”

The Bay Area representative, who identifies as a “progressive capitalist,” seems to enjoy wading into choppy waters. After a couple of failed congressional bids, he finally got elected with the backing of a number of high-profile Silicon Valley moguls — but later allied himself with Sen. Bernie Sanders (I-VT), an outspoken critic of Big Tech. Earlier this month, Khanna made an appearance on Ben Shapiro’s daily talk show, engaging in a surprisingly civil debate on the $15 minimum wage hike with the conservative commentator.

“I certainly hope that you’re not canceled for having appeared on this show,” Shapiro chuckled at the end of the interview.

“We’ll see,” Khanna replied in a nonchalant manner that implied he was unworried about the potential backlash.

Similarly, Khanna suggested in the interview with JI that he is unconcerned by those who question his positions on the Jewish state — noting that in spite of some of his more critical views, his legislative history speaks to a pro-Israel record. He emphasized that he voted in favor of the 10-year memorandum of understanding guaranteeing military assistance to Israel. But the aid, Khanna added, “should not be used for anything that violates human rights.”

Khanna maintained that he has received “overwhelming support” from leaders of many Israel groups across the country, including staffers at J Street. “I think they appreciate the view I have, which is a strong sense of the cultural and economic relationship between the United States.”

“When I speak out on issues, it’s with the aspiration of strengthening the relationship, strengthening the security of the countries and also affirming the rich tradition of human rights,” Khanna told JI, expressing his admiration for the former Israeli prime ministers Yitzhak Rabin and Shimon Peres. Their leadership, he said, “holds open the prospect of peace and a recognition of two states and a recognition of two states living side by side in peace. That’s the philosophy that I believe in and will continue to work toward.”

Rabin’s legacy in particular has recently become a hotly debated topic after Rep. Alexandria Ocasio-Cortez (D-NY), facing pressure from anti-Israel activists, pulled out of an Americans for Peace Now event commemorating the 25th anniversary of his assassination.

But Khanna rejected the notion that Rabin was a controversial figure.

“I think Yitzhak Rabin was a statesman and ought to be commemorated,” he argued. “He was assassinated for trying to bring peace, as I understand it, and he was assassinated by people who didn’t want him to compromise on behalf of peace. So he really was someone who died for his beliefs. He also signed the historic agreement for the Palestinian leadership, as I remember it, as part of the Oslo Accords, and won the Nobel Peace Prize. If we don’t celebrate someone like him, what hope do we have?”

That view, he explained, “really captures my sentiment of the U.S.-Israel relationship — that we need that vision to prevail — and similar leadership, by the way, on the Palestinian side, that the Palestinian side needs to also cultivate leaders genuinely seeking peace.”

“What I would recommend is reading Frederick Douglass’s speech about Abraham Lincoln, where Douglass talks about so many of the shortcomings of Lincoln in terms of not recognizing the intrinsic rights of Black Americans and prioritizing the political considerations of the nation over Black rights, but then says what Lincoln did was so extraordinary that he deserves to be celebrated,” Khanna said. “The reason I say that is that every person, and certainly great leaders, all have warts. Gandhi has warts. There’s no one who is perfect. But I think the question is, did they work in their lives holistically to advance peace or not? To me, Rabin clearly is in the camp of having advanced peace.”

As for Biden’s record during his first weeks in office, Khanna remains somewhat wary, at least with regard to the president’s foreign policy approach in the Middle East. Though he commends the president’s decision to end U.S. support for the Saudi Arabian-led military offensive in Yemen, Khanna believes the administration needs to go further in demanding that the Saudis lift the blockade that is said to have led to widespread famine in the embattled Middle Eastern country. He added his disappointment that Saudi Crown Prince Mohammed bin Salman was not sanctioned for ordering the assassination of the journalist Jamal Khashoggi.

“At the very least, travel restrictions,” Khanna said. “How do you justify allowing him to come to the United States?”

The congressman has also been openly critical of Biden’s move earlier this month to launch airstrikes targeting Iran-backed militias in Syria in response to repeated rocket attacks on American forces in Iraq — and says he has been frustrated by the administration’s approach toward reentering the Iran nuclear deal, otherwise known as the Joint Comprehensive Plan of Action, or JCPOA. 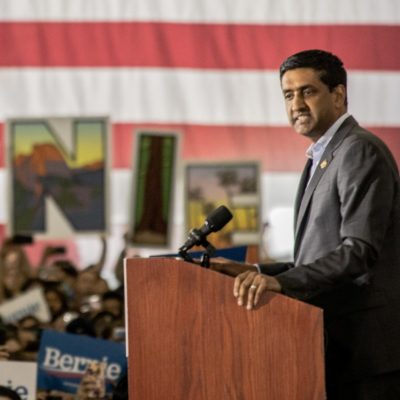 “There shouldn’t be a game of chicken,” Khanna said, adding: “Every day we delay, they’re continuing to reach their goal of building a nuclear weapon. We need to reverse that. We ought to be willing to remove some of the Trump sanctions, get into the JCPOA agreement, and recognize that we could always have those sanctions snap back if they aren’t living up to the terms. But it’s not in our interest to have the status quo continue. The status quo has been a disaster. It’s allowed Iran to get closer to a nuclear bomb.”

While Khanna believes vacating the Iran nuclear deal was ill-advised, he reserved praise for the Trump administration’s role in brokering the Abraham Accords, which established diplomatic relations between Israel and a number of Arab nations. “Every country in the Middle East ought to recognize the obvious,” he said, “that Israel is a legitimate state, a Jewish state and here to stay forever.”

Although Khanna described the agreements as “constructive steps,” he underscored that there was still much work to be done when it comes to Israelis and Palestinians. “The fact that other countries are recognizing Israel, I don’t think, solves a generational issue of how do you create two states?” he said. “That’s a separate challenge that is going to require extraordinary and continued diplomacy.”

For his part, Khanna advocates for a tech-oriented approach. “I believe that there is the possibility of having more entrepreneurship, a focus on more economic cooperation, economic empowerment of Palestinians, particularly Palestinian youth, working with American entrepreneurs and Israeli entrepreneurs on doing constructive things for the world,” he said. “I think that is really the hope for building peace, to look at joint economic work as part of what builds a bridge and builds towards some aspiration of a common good.”

Khanna noted that he read Start-up Nation: The Story of Israel’s Economic Miracle “in its entirety” and admired it, adding that the popular book about Israel’s economic success may have “subconsciously inspired” the title of his own book, Entrepreneurial Nation: Why Manufacturing is Still Key to America’s Future, published in 2012.

“That’s what informs my politics,” he said, “which makes me often criticized by both the left and the right.”

But Khanna emphasized that his views on the Israeli-Palestinian conflict, though controversial to some, are undergirded by experience. He recalled getting to know Tom Lantos, the former Democratic congressman from California who survived the Holocaust and died in 2008. Lantos later became a mentor to the congressman after a young Khanna unsuccessfully challenged Lantos in a 2004 primary.

The late congressman taught Khanna, who is of Indian descent, about the unique connection between Israel and India — where many Israelis travel after they complete their military service — and encouraged him to visit Israel in 2005. One of the first things Khanna did as he was becoming acquainted with Lantos was to join a dialogue group between Israelis and Palestinians. “People were talking about their rich histories and talking about their experiences and seeking that kind of mutual understanding,” Khanna said.

Khanna told JI that he had recently deepened his understanding of the Jewish state while reading about Jürgen Habermas, the German philosopher who has blurbed Khanna’s forthcoming book, Dignity in the Digital Age.

“So much of Habermas’s philosophy is influenced by the Holocaust,” Khanna said, “and his appreciation for the Jewish state and Israel is, in part, a deep understanding of the trauma and the the deep wounds and the genocide that took place during the Holocaust and the need for a Jewish state.”

Such considerations, Khanna suggested, are of particular concern as California’s department of education puts forth a proposed ethnic studies curriculum whose controversial early drafts were rewritten following accusations that the first draft’s authors omitted Jewish history and included an antisemitic trope. “There needs to be a clear denunciation of antisemitism in any of the curriculums,” Khanna averred. “There has to be a clear sense explaining the importance of the Jewish state.”

“That sentiment has to be kept in curriculums,” he elaborated. “I think it’s fine to have a curriculum that also talks about issues of human rights and, similarly, the aspirations of the Palestinian people should be part of it. But I think that if there is a curriculum that is not clearly talking about the need for why we have a Jewish state, and the legitimacy of the Jewish state, given the historical context, which is not just my view, but the views of some of the greatest philosophical thinkers in the 20th century, then you’re doing a disservice to the education of our young people.”

But, he cautioned, speaking from experience, “it has to be an informed view.”

“Without that informed view, you’re never going to have that type of dialogue that Habermas posits — the type of empathetic dialogue that poses the only possible chance, ultimately, towards peace.”