The House-Senate caucus will be a ‘cheerleading squad’ for the normalization agreements, co-chair Sen. James Lankford told JI 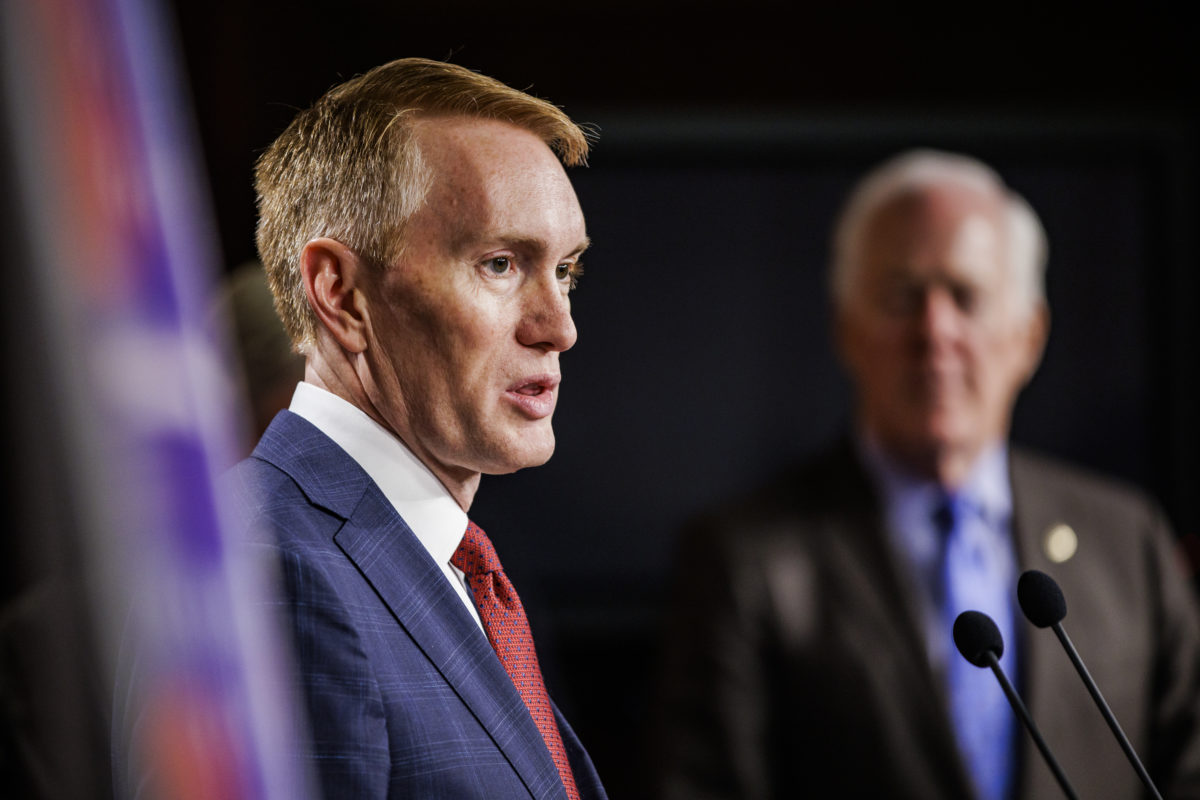 Sen. James Lankford (R-OK) speaks alongside other Republican Senators during a press conference on rising gas an energy prices at the U.S. Capitol on October 27, 2021, in Washington, D.C.

At a time when Congress appears increasingly fractured along party lines and between chambers, a group of eight House and Senate lawmakers will come together this week to launch a bipartisan Abraham Accords Caucus, focused on supporting and promoting the normalization agreements between Israel and Arab states.

“The bipartisan, bicameral Abraham Accords Caucus will provide a unique opportunity for world leaders to come together in our common pursuit of creating a better, safer and more prosperous world for our children and grandchildren,” Rodgers told JI. “I am encouraged by the progress we have made, and I look forward to the amazing things we can accomplish together through our shared commitment to a better future in the name of peace.”

Lankford and Trone said the group came together around a shared goal of supporting the Accords, which were signed in September 2020 between Israel, the United Arab Emirates and Bahrain, working to expand the agreements and promoting economic activity among the countries in the agreement.

“In just one year, the Abraham Accords have already transformed the Middle East by contributing to regional peace and stability, promoting U.S. interests, and enhancing Israel’s security,” Rosen added. “The Abraham Accords Caucus will build on that success by providing bipartisan leadership to strengthen existing partnerships and widen the circle of peace to new countries.” Since the signing of the Accords, Sudan and Morocco have also normalized relations with Israel.

Lankford said that the group can also help keep the executive branch focused on adding more countries to the agreement, both during the Biden administration as well as those of future presidents.

“I don’t want this getting lost in the State Department,” he said. “So this is a way that we can actually reach out to State and continue to push that, and continue to be able to encourage those countries… and we have relationships with them as well.”

The group has not yet sketched out any specific projects or initiatives that it plans to pursue, but Lankford said the group has discussed trips to and conferences with the signatory countries.

“Finalizing the Abraham Accords was a historic step toward peace in the Middle East,” Ernst said. “We must continue these efforts to further our nation’s partnership with Israel and promote peace and prosperity, and I look forward to working with my Democratic and Republican colleagues in the Abraham Accords Caucus to do so.”

Lankford also anticipates that the caucus will urge companies to engage economically with countries in the bloc and collaborate with members of the Knesset and government officials in the Arab states. Trone said the group will also work to support U.S. government investments in the Accords countries, as well as reach out to Egypt, Jordan and Palestinian leaders.

“The United States must continue to play an active role in fostering further dialogue and partnership between Israel and other Arab countries, and I look forward to doing just that as part of this bipartisan group,” Booker told JI.

The path to forming the caucus has not been without a few hurdles: The original plan was to launch the group around the first anniversary of the Accords last September.

Lankford primarily blamed the pandemic for the delays, adding that the Biden State Department’s calibration of its policy on the Accords also took time and that Democratic colleagues told him that they wanted “know exactly where State is on this” before joining the caucus.

“My concern initially was [that the] State Department was hesitant on it, to try to figure out, ‘Are we going to continue [the Accords]? Is this larger?’ They were slow to the trigger last year,” Lankford said. “I’m not not trying to throw anybody on the bus under it. State’s got to figure out what they’re going to do — I think they’re on board now… and working to be able to gain support on both sides of the aisle.”

Trone said, “The biggest focus has been that we really wanted to make it bipartisan and it took a little while for everybody to understand why the caucus will matter and what the caucus is trying to do… and that is a bipartisan — no politics, no party”

Trone said he expects the caucus, which will add members in matched bipartisan pairs, to grow quickly.

It’s less clear at this stage how the caucus might engage with the other major congressional initiative, the Israel Relations Normalization Act, which has garnered support from nearly three-quarters of both chambers but has stalled since being introduced last year. Rosen, Booker, Schneider and Wagner are the original sponsors of that legislation in their respective chambers, and all of the caucus’s members are listed as co-sponsors.

In the Senate, Sen. Ted Cruz (R-TX) is blocking fast-tracked unanimous passage of the legislation, citing concerns about language in the bill establishing U.S. policy as supporting a two-state solution between Israel and the Palestinians. In the House, the bill passed the Foreign Affairs Committee in September but has not yet received a floor vote.

Lankford declined to say specifically how the caucus might engage on the bill, explaining, “I don’t want to try to say for the other three that are helping me get this thing off the ground what’s going to be a priority at the beginning. So let me not say that as a priority. I’m just telling you, anything solidifies the agreement and expands the agreement, we’re going to be for.”

Lankford said he had not discussed Cruz’s objections to the bill with him.

A spokesperson for Rosen, one of the bill’s original Senate sponsors, offered a similar response saying, “Senator Rosen is a co-sponsor and a strong supporter of the Israel Relations Normalization Act, and the Senate Abraham Accords Caucus will explore a range of legislative opportunities once launched.”

Trone said that the caucus can “without question” help to move the bill through the House.

The leaders of the Israeli Knesset’s Abraham Accords Caucus congratulated their U.S. counterparts on the announcement in a statement Monday.

“I deeply cherish the support from the United States and offer my congratulations on the establishment of a sister-caucus in America, with whom we can advance further frameworks for regional cooperation,” Knesset Member Ruth Wasserman Lande said.

The Abraham Accords Peace Institute, a group founded last year by former Trump administration senior adviser Jared Kushner to promote trade and tourism between Israel and the Accords countries, will be collaborating with the caucus.

The caucus “will play a role in a number of ways but the most important I think is to strongly show the support that exists in the U.S. popularly and within the government for the Accords and for their continuing growth and expansion,” the institute’s executive director, Rob Greenway, told JI. He expects the caucus can “do a great deal” to support the Accords’ expansion, keep the Accords top of mind in Congress and help shape pending legislation.