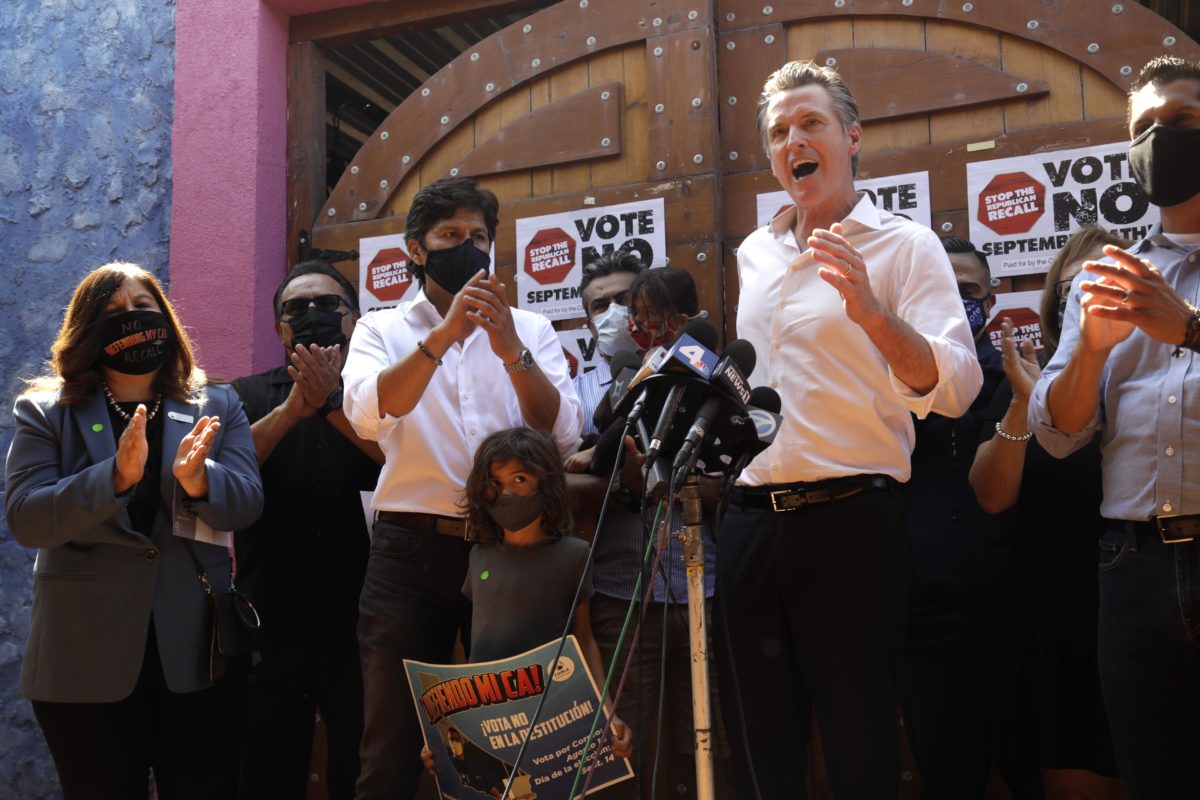 With just four days remaining until California’s high-stakes gubernatorial recall election on Tuesday, Jewish activists on both sides of the aisle are ramping up voter outreach initiatives as the race enters its final stretch.

Jewish Democrats at the state and national levels, including local lawmakers, community organizers and pro-Israel advocates, are particularly engaged in efforts to ensure that the majority of Californians vote against removing Gov. Gavin Newsom from office. Competing to replace the 53-year-old Democrat are no fewer than 46 challengers — most notably Republican frontrunner Larry Elder, a conservative talk radio host who has vowed to rescind statewide mask and vaccine mandates.

The Jewish vote, Democratic activists and political experts say, could prove decisive for Newsom in what is expected to be a low-turnout special election, triggered earlier this year by a successful recall petition, that some polls have indicated may be competitive — even as Democratic voters outnumber Republicans by a significant margin in California.

“Jews vote, they largely vote for Democrats and they strongly oppose right-wing extremists,” Halie Soifer, CEO of the Jewish Democratic Council of America, said in a statement to Jewish Insider on Thursday. “There are hundreds of thousands of Jewish voters in California, and they are absolutely critical to defeating this recall.”

With the help of its northern and southern chapters in California, JDCA representatives told JI that its political arm is now actively targeting 200,000 Jewish voters throughout the state via phone banks, text messages, emails and a digital ad campaign encouraging voters to reject the GOP-backed recall.

“We know that turnout is going to make the difference in this race, and Jewish turnout will play a significant role because we’ve got a sizable population and we lean heavily Democrat,” said David Bocarsly, a resident of Los Angeles who volunteers with JDCA and works as a consultant with the California Legislative Jewish Caucus.

The Jewish caucus — members of which have, along with the Anti-Defamation League, raised concerns over the rhetoric of recall leaders who have compared Newsom’s pandemic mandates to Nazi Germany — is also rallying behind the governor. Last week, it participated in a joint phone bank with a group of ethnic caucuses in the state legislature that supports Newsom, and individual members have engaged in their own personal outreach efforts ahead of the recall.

“The governor has been a strong ally to the Jewish community,” said Democratic state Sen. Scott Wiener of San Francisco, citing Newsom’s efforts to procure funding for nonprofit security grants, as well as his opposition to the initial draft of a controversial ethnic studies curriculum that excluded lesson plans about antisemitism, among other things. Wiener, a vice-chair of the Jewish caucus, said he is organizing a phone bank this Sunday to drum up enthusiasm for Newsom. “We need our community to come out and support the governor.”

In a statement to JI, Newsom spokesperson Nathan Click said the governor “is honored by the support his campaign has received across the Jewish community.”

“During this campaign, Governor Newsom has hosted a number of conversations and virtual events with Jewish leaders across the state,” Click added. “Within his administration, the governor has built a strong record on issues important to the Jewish community, and one of his senior aides, chief deputy legislative secretary Joey Freeman, serves as liaison to the Jewish community.”

Newsom, who was elected to his first term in 2018, is facing only the second recall in state history. In 2003, the Democratic incumbent, former Gov. Gray Davis, was ousted by Republican challenger Arnold Schwarzenegger.

Until not too long ago, it looked as if Newsom — who fought back an avalanche of bad press last November when he was photographed dining at a swanky French restaurant in Napa Valley in defiance of his own pandemic protocols — might suffer the same fate, as polling suggested he was at risk of losing his seat.

But the recall effort appears to have lost some momentum, and surveys now largely show that voters are in favor of keeping Newsom in office — particularly as Elder has come under scrutiny in recent weeks thanks to a litany of past public statements in which he made offensive comments about women, as well as an allegation that he once brandished a gun at his ex-fiancée while under the influence of marijuana.

For the past several weeks, “Newsom has been working very hard to frighten progressive voters about what their lives would be like if Larry Elder would be elected governor here,” said Dan Schnur, a professor at the University of Southern California’s Annenberg School of Communications and a former GOP consultant who worked for an unsuccessful Republican recall challenger in 2003. “And it’s working.”

Sen. Elizabeth Warren (D-MA) campaigned alongside the governor at an anti-recall rally last weekend, and on Wednesday, Vice President Kamala Harris made a pit stop in the Golden State. On Monday, President Joe Biden is expected to make an appearance at a campaign rally in Long Beach.

“My sense is that Jewish voters, and voters more generally, are paying greater attention to the recall lately, and are more likely to vote no, in large part because of concerns about Larry Elder’s extreme views,” said state Assemblyman Jesse Gabriel of Los Angeles, who chairs the Jewish caucus. “His hostility to masks and vaccines, reproductive freedom, common-sense gun safety measures and efforts to address climate change are scary to a lot of California voters.”

For his part, Elder has actively engaged in Jewish outreach efforts. Earlier this week, he toured a Jewish deli in Northridge and, last month, spoke at a campaign event hosted by the political advocacy arm of the Jewish Republican Alliance, JRA Nation, which has endorsed him.

“Larry Elder has always been a friend to the Jewish people and the state of Israel,” said Bruce Karasik, a co-founder of JRA Nation, a grassroots advocacy group in Westlake Village. “His clear thinking on this matter sides with Israel’s right to exist and for peace in the Middle East, and of course Israel’s right to defend herself. Larry has historically seen Israel as the United States’s natural ally in the Middle East and the crucial importance of our steadfast support.”

Arnold Steinberg, Elder’s chief strategist, echoed that view. “Few people know Larry went to Israel during his college years. Over nearly a half century, Larry has been an incredibly well-informed and articulate advocate for Israel,” Steinberg told JI. “Through the last quarter century, Larry has made many friends within the Jewish community and cemented relationships that now have flourished during his campaign for governor,” he added. “Although Larry is a Republican, he enjoys support far beyond the Republican Jewish Coalition and the Jewish Republican Alliance.”

“Larry connects with Jewish voters who have heard him on the radio for more than 25 years,” Steinberg continued . “So many in the Jewish community are familiar with Larry’s long-held support of Israel. It is, of course, more of a challenge to reach leftist Jews who place their ideology above common sense. Even in this situation, when he speaks with more open-minded Jewish liberals, he connects with them, because they experience his powerful intellect and his encyclopedic command of facts and data.”

But Raphael Sonenshein, executive director of the Pat Brown Institute for Public Affairs at California State University, Los Angeles, is skeptical that Elder will emerge as the pro-Israel favorite among Jewish Republicans.

“There’s certainly a minority of Republican Jewish voters who are going to vote against Newsom in the recall,” he told JI. But Sonenshein said he wasn’t convinced that they would vote for Elder, given the assortment of GOP challengers. “That’s kind of an unknown,” he said. “There might be other candidates who would do pretty well with Jewish voters.”

Andrew Lachman, president of Democrats for Israel California, said there was no question as to Newsom’s pro-Israel bona fides. “From an Israel perspective he has been an amazing leader,” Lachman told JI, referring to the governor’s commitment to the memorandum of understanding between Israel and California. Lachman, who published an opinion piece in the SoCal Jewish News about “why Jews should oppose” the recall, said his group has been working on voter outreach with several Jewish Democratic organizations across the state.

Other nonpartisan Jewish groups, including nonprofits and synagogues in California, are simply encouraging voters to cast their ballots without making any attempt to influence their thinking.

“The greatest concern that the Jewish community has, as a community that sees the right to vote as a bedrock privilege and obligation of citizenship, is that too many people will simply sit this out,” said Richard Hirschhaut, regional director of the American Jewish Committee in Los Angeles. “The effort that AJC and others have been making in recent weeks is to encourage people to vote, to find a way to either mail in their ballots or show up at a polling place, but be heard, and exercise that obligation and that responsibility of citizenship.”