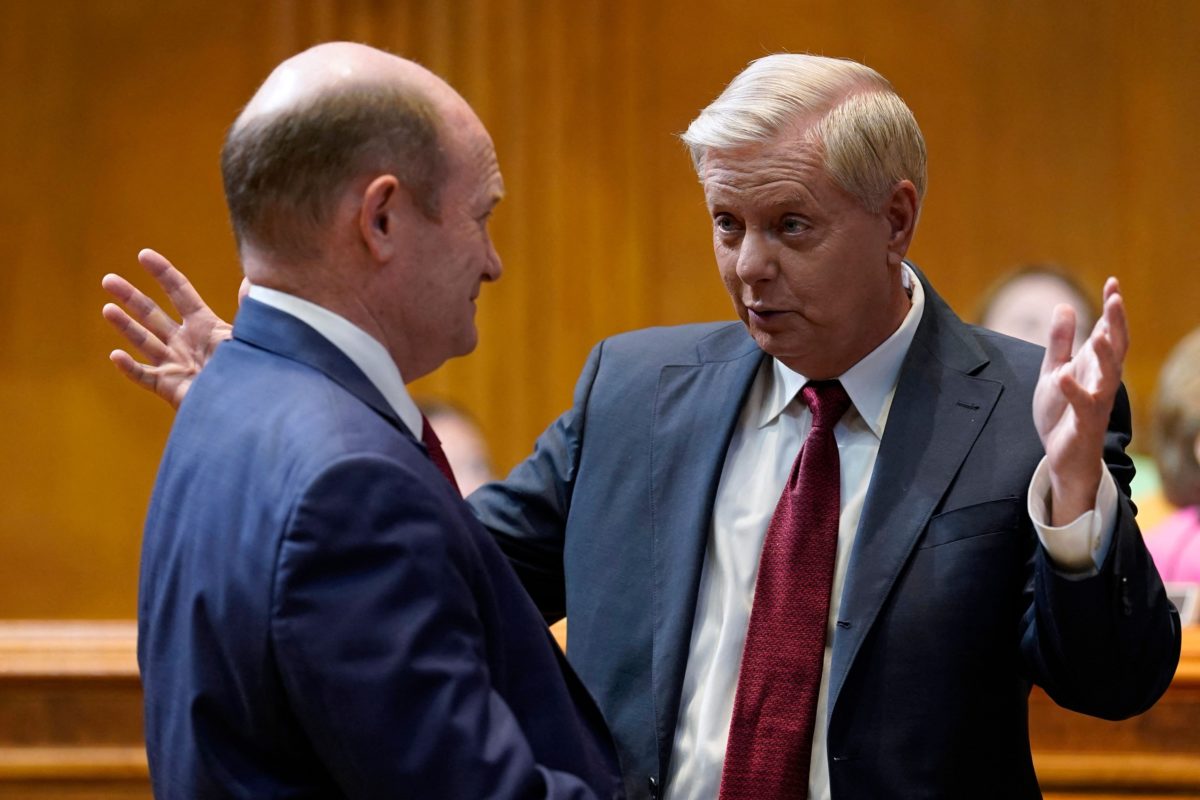 Sen. Chris Coons (D-Del) (L) talks with Sen. Lindsey Graham (R-SC) during a break in a hearing of the Senate Appropriations Subcommittee on Commerce, Justice, Science, and Related Agencies.

With antisemitic incidents on the rise globally, a bipartisan group of senators is calling for a $250,000 funding boost for the office of the State Department’s Special Envoy to Monitor and Combat Antisemitism in 2022, Jewish Insider has learned.

Twenty-eight senators urged Sens. Christopher Coons (D-DE) and Lindsey Graham (R-SC) — the two ranking members of the Senate Appropriations State, Foreign Operations and Related Programs subcommittee — to provide a total of $1.25 million for the office in the 2022 budget, up from $1 million in 2021, in a letter sent June 28.

The House Appropriations Committee approved a draft 2022 State and Foreign Operations budget bill Thursday afternoon, including a recommendation for at least $1 million for the office.

The senators point to the recent global rise in antisemitic incidents, as well as the envoy’s elevation to ambassador status last year.

“Providing additional funds in [fiscal year] 2021 will ensure the State Department has the resources to… continue building on United States leadership in combating antisemitism internationally,” the letter reads. “Specifically, these funds would support the Special Envoy’s efforts to improve the safety and security of at-risk Jewish communities, combat online radicalization, ensure public officials and faith leaders condemn anti-Semitic discourse, and strengthen judicial systems in their prosecution of anti-Semitic incidents.”

The letter was led by Sens. Jacky Rosen (D-NV) and Mike Rounds (R-SD). All but two of the signatories — Rounds and Sen. Kevin Cramer (R-ND) — are Democrats.

“We must take action in response to the growing number of horrific antisemitic incidents occurring in the United States and around the world. We can put a stop to these hateful and threatening acts, but we must do so forcefully and with clear resolve,” Rosen said in a statement to JI. “We must ensure that this post is properly funded, and that the United States maintains its leadership role in combating global antisemitism. I am proud to lead my Senate colleagues in this bipartisan effort to fund the fight against antisemitic hate.”

Lawmakers have been urging the administration to nominate an antisemitism envoy, but the timeline for President Joe Biden’s pick appears unclear. Secretary of State Tony Blinken pledged nearly a month ago that the announcement would be coming “very very soon.”