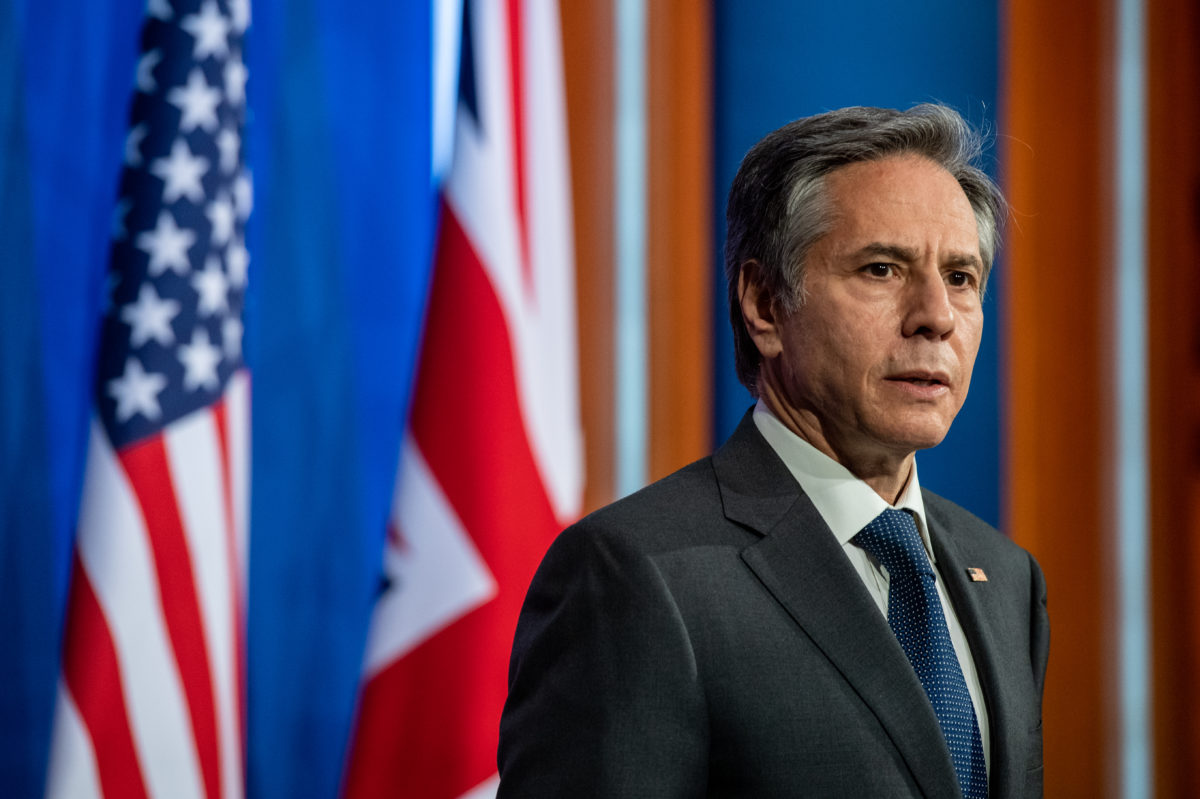 U.S. Secretary of State, Antony Blinken, during a joint press conference with UK Foreign Secretary, Dominic Raab, at Downing Street on May 3, 2021 in London, England.

In a marathon session of back-to-back House hearings on Monday, Secretary of State Tony Blinken discussed the recent conflict between Israel and Palestinian terrorist groups in Gaza, laid out the administration’s case for humanitarian aid to Gaza and appeared to temper expectations for reentry into the 2015 Iran nuclear deal and the prospects of subsequent agreements.

Weeks after Israel deployed its Iron Dome batteries to intercept thousands of missiles fired by terror groups in Gaza, Blinken assured lawmakers that the U.S. is “committed to [Iron Dome’s] replenishment,” adding that “we are working with the Israelis to fully understand their needs and… we look forward to working with [Congress] to make sure that happens.”

Ahead of meetings with U.S. officials last week, Israeli Defense Minister Benny Gantz was expected to request $1 billion in aid for Iron Dome. Neither Israeli officials nor the U.S. government have publicly disclosed the amount Gantz requested last week.

Citing a U.S. intelligence assessment, Blinken downplayed concerns from Republican lawmakers that Iran was directly involved in the latest round of violence between Hamas and Israel.

“I think Hamas has been provided by Iran in the past with key components, technical knowledge for the [rocket] program,” he explained. “The best assessment — public assessment — that we have is that in this most recent incident, most of the rockets were indigenously produced in Gaza by Hamas. That does not in any way excuse Iran’s support for Hamas including very strong rhetorical support in this most recent incident.”

The secretary of state reemphasized U.S. support for Israel’s self-defense against rocket attacks, arguing it would be “unacceptable” for Israel to “not do something” about the rocket fire.

“As a democracy, Israel also has an extra burden to do everything it possibly can to avoid civilian casualties,” he continued. “We also can’t lose sight of the fact that lives were lost on both sides in this most recent conflict.”

Blinken traveled to Israel and the West Bank in late May, shortly after the two sides declared a cease-fire, for meetings with both Israeli and Palestinian leaders.

The trip, he said, was designed in part to “truly restart our engagement with the Palestinian people and the Palestinian Authority,” as well as discuss providing additional humanitarian aid and announce that the U.S. plans to reopen the U.S. consulate in East Jerusalem, which focused on Palestinian outreach. The Trump administration shuttered the consulate in 2019.

Nevertheless, Blinken said that the U.S., Israel, Egypt, the United Nations and other partners believe that they can successfully provide humanitarian and reconstruction aid to Gaza without benefiting Hamas, despite the terrorist group’s popularity in Gaza.

“There is an understanding and a commitment on the part of Israel both to respond to the real humanitarian crisis that exists in Gaza right now — water, electricity, sanitation, sewage. If you look at what is happening, it is, on a human level, unacceptable, and our Israeli counterparts agree with this,” Blinken said.

Aid to Gaza, the secretary of state suggested, could help break Hamas’ grip over the Palestinian population in Gaza.

“Hamas feeds very effectively on despair and the lack of hope. And so in the absence of that, some people will unfortunately tragically, horrifically turn to extremes, which I think only underscores the imperative — including for Israel’s security — that we find ways to effectively offer [aid],” Blinken explained.

In the longer term, he said, in order to avoid a repeat of the recent violence, the U.S., Israel and the Palestinians must “meaningfully address some of the flashpoints” that have contributed to tensions and conflict, including evictions in East Jerusalem, expanding Israeli settlements, the clash between protesters and Israeli security forces at the Al-Aqsa mosque and Israeli settler violence, Palestinian incitements to violence and Palestinian Authority payments to terrorist families.

Addressing another major diplomatic puzzle in the Middle East, Blinken appeared to cast doubt on the prospects of reentry into the 2015 nuclear agreement with Iran, despite reports of progress from the ongoing indirect talks between the U.S. and Iran in Vienna.

“We’re not even at the stage of returning to ‘compliance for compliance,’” Blinken said, punctuating his remarks with a chuckle. “It remains unclear if Iran is willing and prepared to do what it needs to do to come back into compliance” with the 2015 agreement.

The secretary of state pushed back on criticism that the U.S. should be addressing a wider range of issues at these talks, explaining that the U.S. is prioritizing Iran’s nuclear program because “each and every one [of Iran’s malign activities] would be even worse if Iran had a nuclear weapon or was on the threshold of being able to have one.”

He also appeared to temper previous rhetoric about seeking follow-on agreements that would “lengthen and strengthen” the deal after reentry.

Blinken said instead that the administration would use a revived deal “as a platform both to look at whether the agreement itself can be lengthened and, if necessary, strengthened and also to capture these other issues.”

A State Department official told Jewish Insider on Monday afternoon that Blinken’s comments did not reflect a change in administration policy.

“We are pursuing the path of meaningful diplomacy to achieve a mutual return to compliance with the Joint Comprehensive Plan of Action (JCPOA), and intend to build on that to lengthen and strengthen the constraints on Iran’s nuclear program, and also address other issues of concern,” the official said.

Blinken pushed back on criticism that the administration is too willing to offer sanctions relief to Iran, arguing that the U.S. will “have all of these other tools which we will very actively use” in response to Iranian malign activity even if it does reenter the deal.

Blinken also said that the administration hopes to put forth a nominee to be the State Department’s envoy to monitor and combat antisemitism “very very soon.”

He also rebuffed a recent report from the Washington Free Beacon that claimed the State Department is actively avoiding using the name “Abraham Accords” to refer to the Trump-era normalization agreements between Israel and several Arab states. Blinken said he had no knowledge of any such directives.

“It’s certainly not coming from me. I’m happy to refer to them as the Abraham Accords,” Blinken said. “I think they were an important achievement, one that not only do we support but we’d like to build on.”