Former Gov. Terry McAuliffe, who sat out debate, told JI he believes in ‘a strong relationship between Israel and Virginia’ 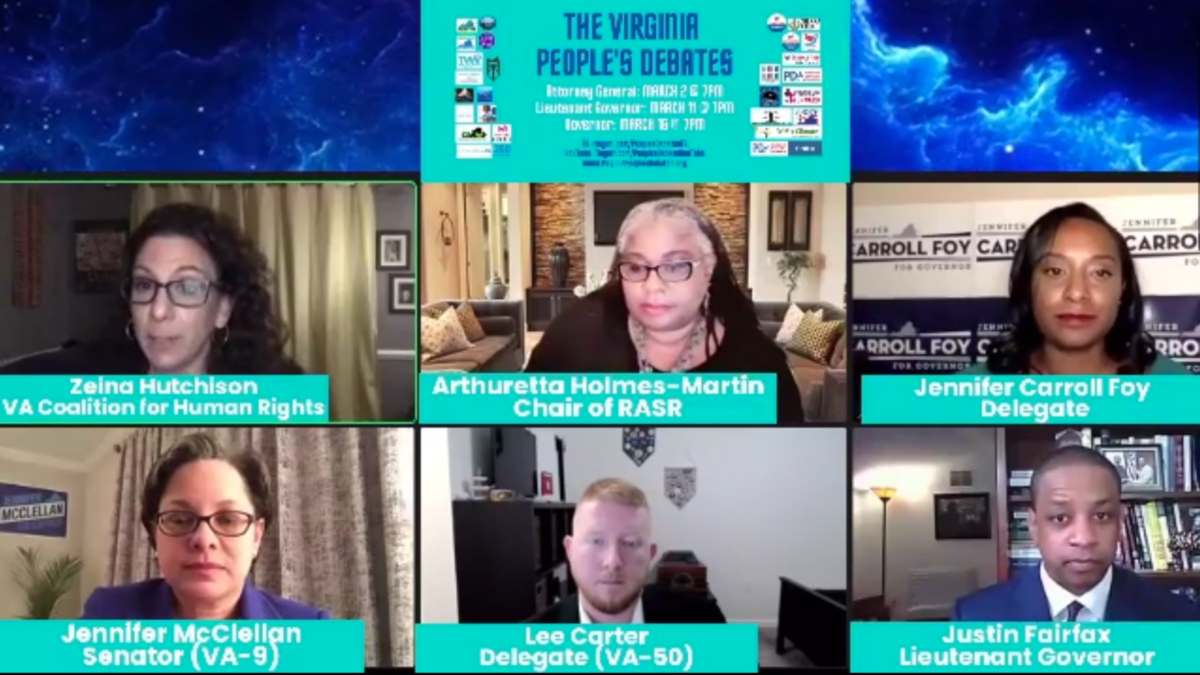 A screenshot from the Virginia People’s Debate for Democratic gubernational candidates.

At a Virginia gubernatorial debate on Tuesday night, four of the five Democratic candidates running for Virginia’s top office said they would oppose efforts to “discourage or criminalize” the BDS movement if elected.

Candidates at the Virginia People’s Debate — hosted virtually by more than two dozen progressive organizations — were asked about issues including economic inequality and criminal justice. Zeina Hutchison, from the pro-Palestinian Virginia Coalition for Human Rights, defined the Boycott, Divestment and Sanctions (BDS) campaign against Israel as “a form of peaceful protest to secure Palestinian rights and pressure Israel to comply with international law,” citing 32 states that “discourage or criminalize” the BDS movement. Hutchison asked candidates: “If you are asked to issue a gubernatorial directive against BDS, would you agree to do so? Why or why not?”

All four candidates who participated in the debate said they would not take any government action against the BDS movement, which many members of the Jewish community believe unfairly singles out Israel and seeks its destruction as a Jewish state. None of them mentioned Israel.

“As a child of parents who participated in the civil rights movement, I understand that boycotts and protests are critically important to advancing civil rights,” said State Senator Jennifer McClellan, “and I will not do anything, anything that will criminalize that behavior.”

Former Delegate Jennifer Carroll Foy and Lieutenant Gov. Justin Fairfax echoed that sentiment. Foy said that “criminalizing BDS is unconstitutional,” adding that in her view, “anything that will prohibit people being able to express their discontent or to ask for banning or sanctions or chills First Amendment rights is something that I cannot support.”

Fairfax explained that “it really is our role and responsibility to adhere to the Constitution, both the Commonwealth of Virginia and the United States of America, and also to ensure that all of our citizens have the opportunity to express themselves and their opinions.”

Delegate Lee Carter, a self-described socialist, was the only candidate to come out in favor of BDS. “I’m a supporter of the BDS movement. I believe that the human rights abuses that are being inflicted upon the Palestinian people are among the worst currently ongoing in the world,” Carter said. He also called for the elimination of the Virginia Israel Advisory Board, a state agency established in 1986 “to help Israeli companies build and grow their U.S. operations in/through Virginia,” according to its website.

Former Gov. Terry McAuliffe was the only candidate who did not appear at the debate. But in an interview with Jewish Insider hours before it took place, McAuliffe touted his pro-Israel bona fides: “I tried to foster that as governor, a strong relationship between Israel and Virginia,” he said. “We did a lot of economic projects together.” He mentioned a trade mission he took to Israel while in office. “I went over and spent an hour alone with Bibi [Prime Minister Benjamin Netanyahu]. I’ve met [Ehud] Olmert. I’ve met with [Ariel] Sharon, [Ehud] Barak, and [Shimon] Peres,” McAuliffe said, listing several of Israel’s past prime ministers.

In 2016, Virginia became the seventh state to pass legislation condemning the BDS movement. The resolution was spearheaded by Jewish lawmaker Eileen Filler-Corn, who now serves as speaker of Virginia’s House of Delegates. The resolution — which passed overwhelmingly in the House and by voice vote in the Senate — did not criminalize the movement or its supporters, but rather offered an official condemnation.