The philosopher, author and educator has penned a new book exploring the religious-secular divide in the Jewish state 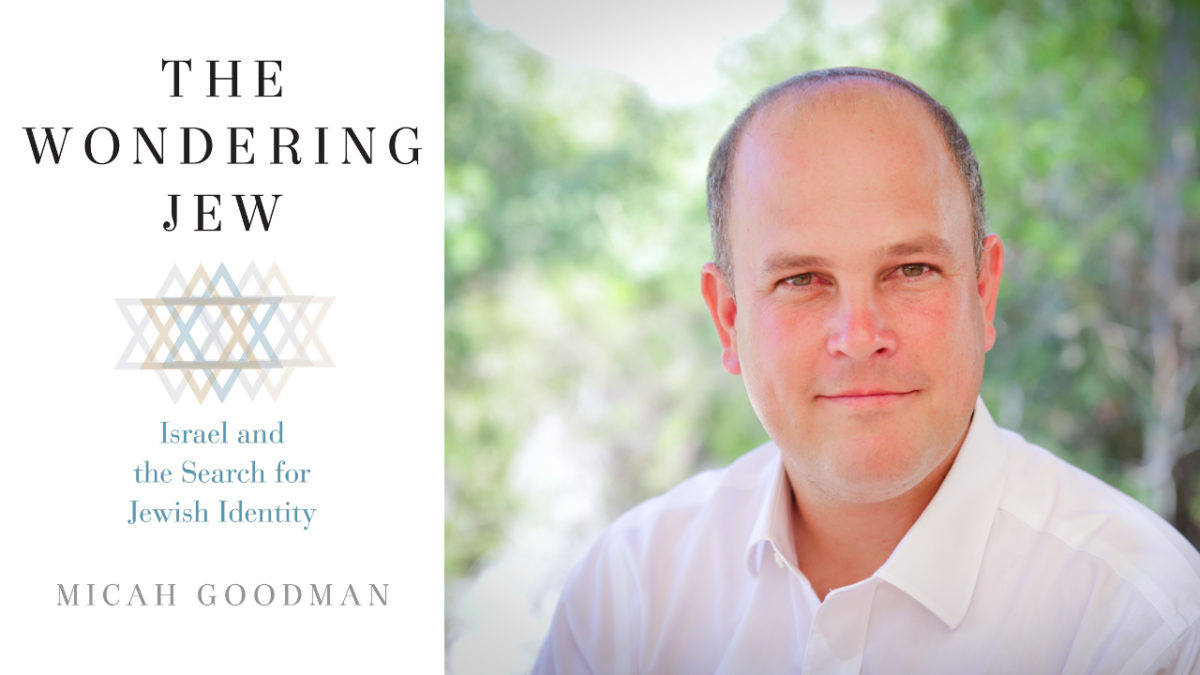 Author Micah Goodman and his new book, 'The Wondering Jew.'

Micah Goodman first set out to write his new book, The Wondering Jew: Israel and the Search for Jewish Identity, a number of years ago. And while he was writing a treatise on the secular-religious divide within the State of Israel, he drafted a chapter on its connection to the political divide in Israel.

That chapter instead ended up becoming Catch-67, Goodman’s bestseller exploring Israel’s political divide, which was published in Hebrew in 2017 and in English a year later. The author, philosopher and educator later returned to The Wondering Jew, which has now been translated into English by Eylon Levy and published earlier this month.

“The right-left division was actually a chapter inside the secular-religious division — that’s how this whole thing started,” Goodman told Jewish Insider in a recent phone interview. “And then it turned into two books, by accident.”

Goodman notes that while politics and religion are heavily intertwined in the Israeli zeitgeist, “that’s a relatively new phenomenon,” and The Wondering Jew takes a much broader look at how religious divisions in Israel have formed since the beginning of Zionism. “Our right-wing identities and our left-wing identities are a smaller part,” he said. “Our religious and secular identities are so much stronger than our political identities.”

The book offers a deep exploration of the role of religion in Zionist thought, the creation of the State of Israel and the country’s current sociopolitical climate. Goodman cites heavily from varied Jewish thinkers including Ahad Ha’am, Theodor Herzl, Hayyim Nahman Bialik, Maimonides, Rabbi Abraham Isaac Kook, Rabbi Abraham Joshua Heschel, Micha Josef Berdyczewski and many more to better understand the evolving role and nature of religion in Israel.

Goodman highlights the origin of the role of religion in the State of Israel, which can be traced back to the “status quo” implemented by founding Prime Minister David Ben-Gurion at the inception of the state, awarding control over religious affairs in Israel to the ultra-Orthodox. That decision, he says, was one born of “political necessity” in 1948, to ensure that the haredi groups who had lived in Israel for generations would not publicly oppose the U.N. partition plan.

“Ben-Gurion was a pragmatist,” Goodman says. “He was willing to compromise his values and his principles in order to form the State of Israel.” The avowed secular, humanist Ben-Gurion “was willing to sacrifice the character of the state in order to have the state,” Goodman added, leading to the creation of what Goodman describes as “one of the only democracies in the world governed by religious laws.”

But, Goodman opines, Ben-Gurion never imagined that the deal he cut more than 70 years ago would perpetuate that stranglehold on the State of Israel even today, where issues like conversion, kashrut, the Kotel and more are still controlled by the ultra-Orthodox. That’s because Israel’s first prime minister fervently believed that ultra-Orthodoxy would soon be a thing of the past, ushered out by the secular wave of modernization.

“When you think that something has no future, it’s very easy to give it power,” Goodman said. “And that is probably the greatest misunderstanding of the phenomenon of religion: thinking that religion is something weak, something that is going to die, something that is going to evaporate,” he added, “was a miscalculation made by not only Ben-Gurion, but many, many modernists, who did not see the power of religion, and the fact that religion is always relevant.”

Goodman argues throughout the book that Israel is the ideal environment for a living, thriving, dynamic Judaism, where Jews can live however they please with little risk of assimilation or extinction. “Israel is the only place where Jews are not forced to make the choice between tradition and modernity,” he writes. The most secular Jew in Israel still lives according to the Jewish holiday calendar, speaks the language of the Bible and “even Jews who are indifferent to Judaism and neglect their own faith can be reasonably certain that as long as they remain in Israel, they will have Jewish grandchildren.”

But while Goodman lauds this environment, he remains expressly concerned about the monopoly ultra-Orthodox Jews hold over issues of religion and state in Israel, which he believes has turned many secular Israelis as well as diaspora Jews of all stripes against Israeli Judaism.

The Wondering Jew is an entreaty for a middle path between secular and religious Judaism, a call to adopt the best parts of both and reach a common ground and understanding. The way to end the current status quo in Israel, Goodman says, is to make secular Israelis care more, not less, about Judaism.

Most Israelis don’t vote on issues of religion and state, Goodman says, noting that the average Israeli’s politics are defined by security, followed by the economy, education, health care and other day-to-day concerns. “On the other hand, within the haredi community, the number one priority is maintaining the status quo with regards to religion and state,” he points out. And the haredi political parties are generally willing to compromise on other political issues in order to maintain their hold on the status quo.

“For this to change, we don’t have to have a lot of Israelis that want to change it, you need to have [enough] Israelis that want to change it a lot,” Goodman said. “Because Israelis are not that religious, religion is not that important to them. But the more Judaism becomes important to Israelis, the more the Jewish character of the state becomes a priority. That’s why the paradox is that the more Israelis care about Judaism, the more the haredim lose their power.”

And Goodman expressed optimism that such an outcome is not only possible, but is a trend he believes is on the horizon.

“There is a way for secular Israelis to feel passionately about their Jewish identity without becoming religious,” he said, “to have an intimate relationship with tradition without being controlled by tradition.”

“That idea, of secular Judaism, where my secularness is expressed in my Judaism, and my Judaism enables the liberation of my secular identity — that possibility is something I feel more and more Israelis are drawn to,” Goodman told JI. The movement, he says, “is not secular Israelis becoming religious, it’s Israelis becoming Jewish. And the more that trend gains momentum and gains traction, haredim lose their power.”

The way out of the paradigm, he suggests, is for religious Israelis to become more open and accepting to the outside world and modernism, and for secular Israelis to embrace Judaism as an integral part of their heritage and tradition.

Goodman sees such a trend playing out prominently in Beit Prat, the network of Jewish learning centers for young adults that he directs, which “fosters a dynamic, inclusive form of Israeli Judaism.”

“Beit Prat represents a broader phenomenon,” Goodman said, noting that its student body has grown from 5 to more than 1,000 people since its inception in 2006. “The success of Beit Prat among young Israelis is a reflection of a new awareness, a new psyche among young Israelis.”

Outside of Beit Prat, he said, he also sees this trend reflected in music and literature in Israel, where Jewish themes are no longer taboo for secular artists and writers, and religious artists — including singers like Hanan Ben-Ari and Ishay Ribo — enjoy mainstream success. Goodman cites Plato as noting that “when music changes, that means society changes.”

Goodman believes that while in the United States, the political polarization reflects a divided America, in Israel “our politics are polarized but our country is not.”

And polarization is a central theme of Goodman’s next book, which is slated to come out next year in Hebrew and not long after in English, tackling the relationship between individuals and technology.