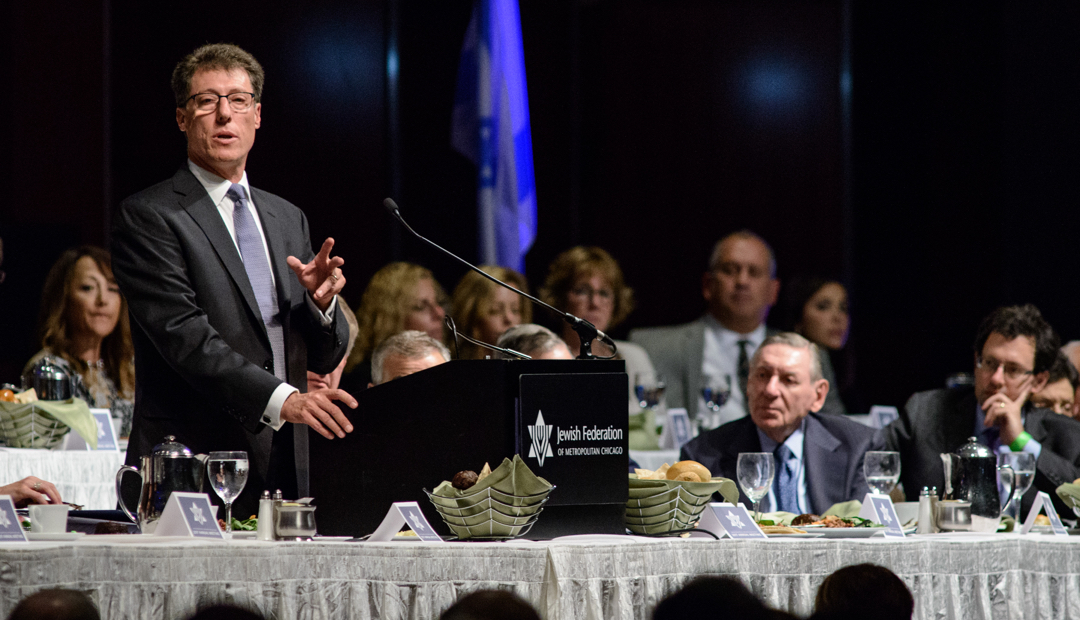 In his latest book, the author and scholar argues that the relationship between the communities is 'so fraught, and so frayed, and so hanging by a thread.'

For months, if not years, alarmist headlines have proclaimed growing cracks in the relationship between Israeli and American Jewry, riven deeper by each new controversy and round of rhetoric. Those ubiquitous headlines are nonsense, says scholar and author Daniel Gordis. There aren’t cracks in the relationship, there’s a gaping chasm, he argues in his latest book, We Stand Divided: The Rift Between American Jews and Israel, which was published today.

And it’s not because the Israeli government barred two congresswomen from visiting, or because American Jews vote largely for Democrats, or even any other issues and divisions over the Kotel or conversion. It’s because the two largest Jewish communities in the world are fundamentally different and always have been, claims Gordis, a rabbi and senior vice president at Shalem College in Jerusalem.

“These are all important issues,” Gordis said, referencing the failed deal to create a pluralist area at the Kotel and the controversial nation-state law passed last year. “But they’re not the real issue… the relationship is so fraught, and so frayed, and so hanging by a thread, that anything” can cause a blowup, Gordis told Jewish Insider during a recent interview at a Jerusalem coffee shop.

Gordis said he wasn’t surprised to see the op-eds and the thinkpieces declaring, once again, the death of the relationship between American and Israeli Jewry after the Israeli government banned Reps. Ilhan Omar (D-MN) and Rashida Tlaib (D-MI) from visiting last month. But he was disheartened.

In his latest book, Gordis clearly and succinctly lays out how tensions between the Jewish state and the American Jewish community have existed since before the State of Israel was even founded. In the late 19th century — shortly after the First Zionist Congress was held in Switzerland — the umbrella group of U.S. Reform rabbis declared “We are unalterably opposed to political Zionism. The Jews are not a nation, but a religious community… America is our Zion.”

Thought leaders and politicians of today, Gordis said, simply have short memories when it comes to the relationship between Israeli and U.S. Jewry, forgetting about the long and fraught history between the communities. “We don’t know enough. We have very short memories,” he said. “Everything is now viewed through a very angry political lens. We’re living in a very angry time.”

Though Gordis believes that antisemitism in the United States will only get worse in the coming years, he doesn’t think it will drive any meaningful increase in aliya. “It would have to get really, really bad for people to make aliya,” he said. After all, he noted, pogroms in eastern Europe did very little to drive emigration in the late 19th century. And while he believes the U.S. Jewish community will inevitably shrink, a “nucleus” of American Judaism will always remain.

Despite his deep concerns, Gordis is far from fatalistic about the futures of both communities. His concerns lie most in the continuation of the relationship between the two.

“Jewish history has proven entirely unpredictable,” he writes. “For either of the world’s two great communities to imagine with confidence that they represent the future of the Jews, and that another enormous community is therefore of no interest to them, would be to have learned nothing at all from millennia of Jewish experience.”

He hopes that leaders on both sides of the Atlantic can come together enough to understand that the relationship can be salvaged, as long as they recognize each other’s differences.

If that basis is established, he said, “we’ll [be able to] understand each other.” And the interactions can become less about how “you’re not living up to your responsibilities,” and more about how “we’re really very different and we react differently.”

Gordis is quick to point out that both Israeli and American Jewry are unmitigated success stories. Jewish Americans have become senators and Supreme Court justices and prominent writers and artists. And Israel has not just survived but thrived, building a flourishing society and robust economy in the middle of a desert.

“What I’m less optimistic about,” he said, “unless we really change the conversation, is the relationship between the two. Because I can’t really see both communities doing fairly well and having almost nothing to do with each other.”