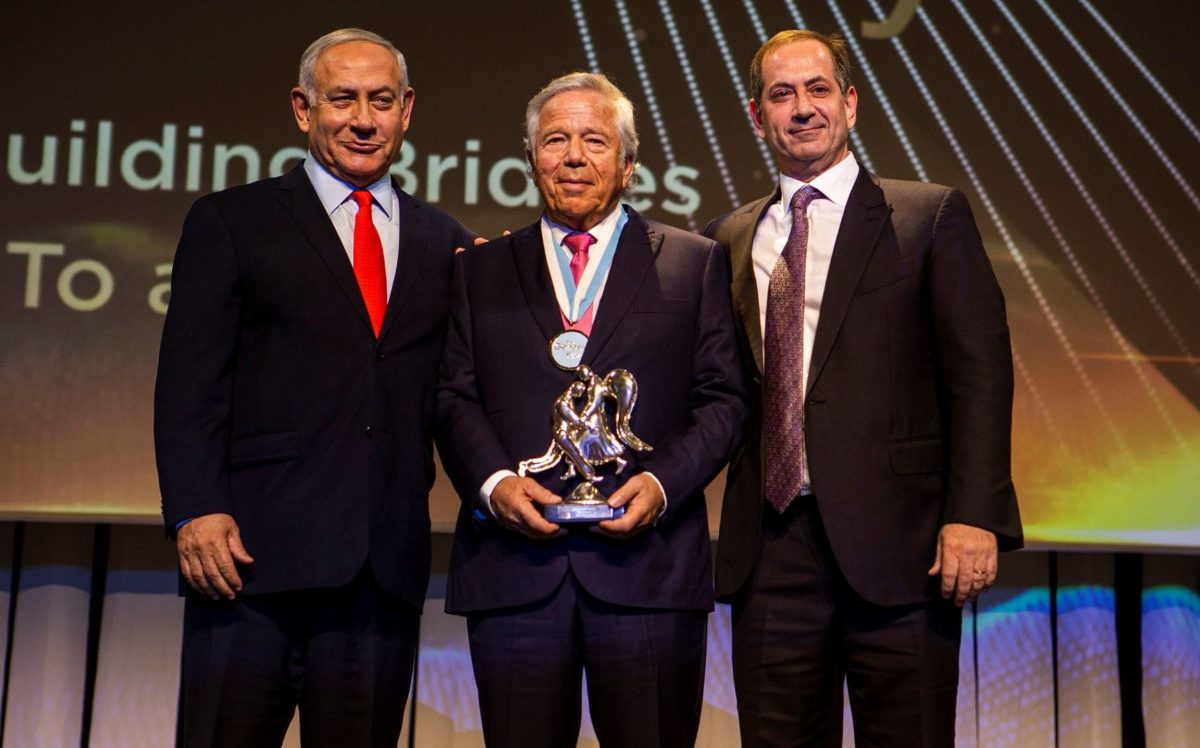 Accepting the Genesis Prize from Israeli Prime Minister Benjamin Netanyahu during a glitzy ceremony in Jerusalem in June 2019, New England Patriots owner Robert Kraft announced his vision to “work to end the violence against Jewish communities.”

The prize, granted annually, has become an aspirational award for accomplished members of the Jewish community, honoring their achievements across a variety of fields. It is intended to have the simultaneous effect of encouraging Jewish activism, awarding a check of $1 million to its laureates who, to date, have shown no personal need for the money.

Before an applauding audience at the Jerusalem Theatre, Kraft used the occasion to announce the formation of the Foundation to Combat Anti-Semitism, an effort he painted in lofty terms as working to thwart the rise of antisemitism.

“To counter the normalization of antisemitic narratives that question Israel’s right to exist, disguised as part of legitimate debate on campuses and in the media. To educate, to inform, and to heal inter-communal relations,” Kraft said. “In combating the scourge of antisemitism, my solemn ambition is to counter all forms of intolerance in the spirit of the ancient Jewish value of tikkun olam — to heal and repair the world.”

Kraft immediately committed $20 million to the foundation, now a part of the larger Kraft Family Philanthropies. This was joined, shortly after, by a $5 million commitment from fellow billionaire philanthropist Roman Abramovich — all part of an initial plan to raise some $50 million for the new foundation. But despite the high-profile and high-dollar origins, little of the effort has been made public for over a year.

Now, the organization is going public with its first major initiative, [Together Beat Hate], or [TBH], an effort to engage youth in education, conversation, and activism around the meaning and reality of antisemitism.

“We’ve been saying all along, it’s not a Jewish issue, it’s a community and a society issue,” Josh Kraft, president of Kraft Philanthropies and Robert’s son, told Jewish Insider.

Kraft broke the general population down into three segments: those who hold antisemitic attitudes, those who are knowledgeable about and opposed to antisemitism and those with an incomplete or misconstrued understanding of antisemitism. This third group, which he believes is the most susceptible to learn about the issue, has become the focus for [TBH].

“We’re trying to reach that group in the middle specifically,” he explained. “We feel like we can influence their experience with the [Jewish] community.”

Institutional memory of the Holocaust is quickly fading as the number of survivors dwindles. A January study by the Pew Forum found that less than half of Americans can accurately approximate the number of Jews killed by the Nazis. Yet reports released by the FBI and the Anti-Defamation League show a rapid increase in antisemitic hate crimes in the United States.

In January, the foundation commissioned a study on the perceptions and knowledge of antisemitism among American youth — which they defined as those ages 13-35. The findings, according to the group, indicated a particular lack of familiarity with the terminology and history of antisemitism among those aged 13-17.

This age group appeared especially representative of the middle segment described by Kraft: largely unfamiliar with antisemitism and in need of education, but without any preconditioned antisemitic views.

“They truly just don’t know what we’re talking about when we say antisemitism,” Rachel Fish, the executive director of the Foundation to Combat Anti-Semitism added. “They say things like, well, ‘what’s a Semite?’ and ‘I’m not really sure what that is, but I’m anti-racist, I’m also against homophobia, I’m against Islamophobia, so I’m probably an antisemite,’ and they don’t understand that they’re actually an anti-antisemite. They don’t even understand the terminology.”

To address the issue, Kraft and Fish turned to Ryan Paul, an expert in digital media, to organize and run the outreach campaign.

Paul’s approach was modeled after the success of groups like Black Lives Matter, which attracted attention to its movement by exposing those without previous experience or knowledge to stories of racism. Through the [TBH] social media channels and website, the group built a platform that it hopes will bring attention to the issue of antisemitism.

“We’re encouraging people who may not be aware of Jew hatred or antisemitism to explore and to learn things, and we’ve provided content starters for them to have conversations with folks to share what those conversations have been like, in order to expose a broader group of people to this topic,” Paul explained.

Last week, [TBH] published its website, featuring glossy black-and-white photos and call-to-action quotes like “hatred is not a given.” The centerpiece of the site is a five-step plan for visitors to educate and raise awareness for themselves and others.

Step five — called “Act Together” — encourages visitors to submit their ideas for future campaigns or partnerships. Though the team did not mention any specific groups or opportunities, they repeatedly emphasized an interest in working alongside organizations dedicated to fighting other forms of hate.

The organizational and educational work — fueled primarily through social media — will be supplemented by a digital command center currently under construction in Gillette Stadium, the headquarters for the Patriots and other Kraft-affiliated organizations. There, a team will track more than 300 million websites and social media platforms across the internet and dark web, compiling data on incidents and trends in antisemitism.

Though other longstanding organizations monitor and compile similar information, Fish claims [TBH] will be the first to tie that data directly into social media campaigns aimed at youth. The real-time information gathering will also work as a rapid-response effort, determining which sites and patterns to target.

Fish and Paul admitted this real-time and far-reaching approach straddled the line between drawing attention to the hatefulness of the content and providing emerging movements with undue publicity. But while the organization works to define that standard, Fish argued the information would still prove useful in dissecting the methods of their internet opponents.

“What we want to do is understand that messaging, so that we can refine the way in which we engage with our target audience so that they won’t be seduced by that messaging, but rather, would be positively predisposed to the kind of framing that we’re putting out there,” she said.

The foundation — which has also consulted with experts on youth psychology and the effects of social media — will use the resulting research to furnish its partnerships with similar groups.

Given the logistical restrictions of the ongoing pandemic, the team seemed unsure of an exact timeline for their work. Still, only a few weeks into the project, Kraft, Fish and Paul are impressed with the response from groups seeking to partner with [TBH].

“I really feel very strongly that it relies on people to use their voices right and it’s people from many different backgrounds,” Paul added. “And I can tell you as somebody who’s not in the Jewish community, this is new. It’s a learning experience for me.”