Auchincloss defends himself amid renewed scrutiny of past statements 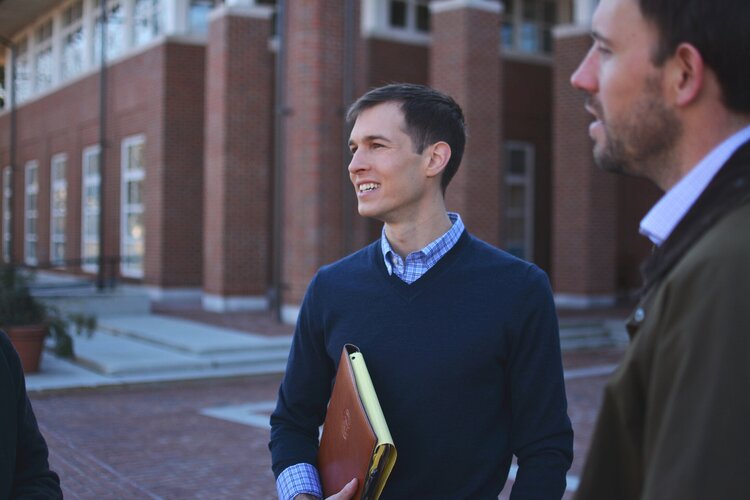 Facing a firestorm of criticism for past social media posts, Massachusetts 4th district Democratic congressional candidate Jake Auchincloss addressed his comments in a web event hosted by the Boston Globe on Monday.

The Globe had endorsed Auchincloss — a Newton, Mass. city councilor — in the district’s crowded Democratic primary shortly before the social media posts resurfaced.

In a 2010 post, addressing Pakistani lawyers burning an American flag at a rally, Auchincloss wrote, “So we can’t burn their book, but they can burn our flag?” In the other, he said that Cambridge, Mass. was “taking P[olitical] C[orrectness] too far” by changing Columbus Day to Indigenous People’s day.

Auchincloss apologized for his comments about the Quran, characterizing them as “a stuipd remark by a snarky 22-year-old” and said that he is “surprised and embarrassed” by them now. “It’s not how I felt then and it’s certainly not how I feel now,” he said.

Auchincloss argued that he was attempting to point out difficulties inherent in the broad protections of the First Amendment.

“As a country, we have grappled with how to balance the First Amendment freedom of expression, which has been an important bulwark of liberty in our country’s history, against the portfolio of other civil liberties that we cherish, including freedom from fear and freedom from harassment — and that’s an ongoing balance that we need to strike as a country,” he said.

He went on to say that he objects to burning both scripture and the American flag, adding that he was not advocating for burning either in his post. He said he has “grown and evolved” since he posted the comment, pointing specifically to his experiences working with Afghani Muslims while deployed to the country.

When pressed by Globe editorial editor Bina Venkataraman, who moderated the event, Auchincloss said the post was a “tone deaf way to kind of make a point about mutual toleration.”

The candidate also addressed a previous statement that Newton high school students should not be punished for displaying a Confederate flag on school grounds. Auchincloss had argued that the students had the First Amendment right to display the flag, but told Venkataraman that he now regrets his response.

Auchincloss also said that he has changed his opinion on Columbus after reading more about him, and is now advocating for Newton to change the holiday to Indigenous People’s Day.

“I do worry that on college campuses in particular, we see an increasing reluctance to engage with different points of view, I think we’ve seen this, and this is especially close to home for me as a Jewish American,” he said. “We’ve seen this with issues related to Israel and BDS… I do think that as a country, we’ve got to be careful that we’re not putting [blinders], that we really are willing to grapple with the full suite of opinions.”

Auchincloss also addressed reader concerns over his level of engagement with communities of color in Newton.

He insisted he’s been engaged in conversations about racism and discrimination throughout his time in city government, noting that he has received the backing of local civil rights advocates.

“I’m going to continue to be there in Congress on behalf of the Black community, on behalf of other historically marginalized communities,” he said. “We have a tremendous amount of work to do as a country to be a place where everybody truly feels like they’re part of our common heritage and they’re part of the 21st century promise that we have. And I’ve been there on the City Council and I’ll be there in Congress.”

Venkataraman questioned Auchincloss’s claims that he opposes dark money in politics, noting that he has benefited from $180,000 in outside advertising from a super PAC, which received a $40,000 donation from his parents.

“We have a broken campaign finance system,” he responded. “We have to operate in the system that we have. We all have to play by the same set of rules. And right now I’m under attack by a quarter million dollars worth of dark money that is trying to paint an incredibly unfair distortion of my beliefs. And I think there are people who want to tell a positive story about me… I hope that story gets out and can counterbalance these really negative unfair attacks.”