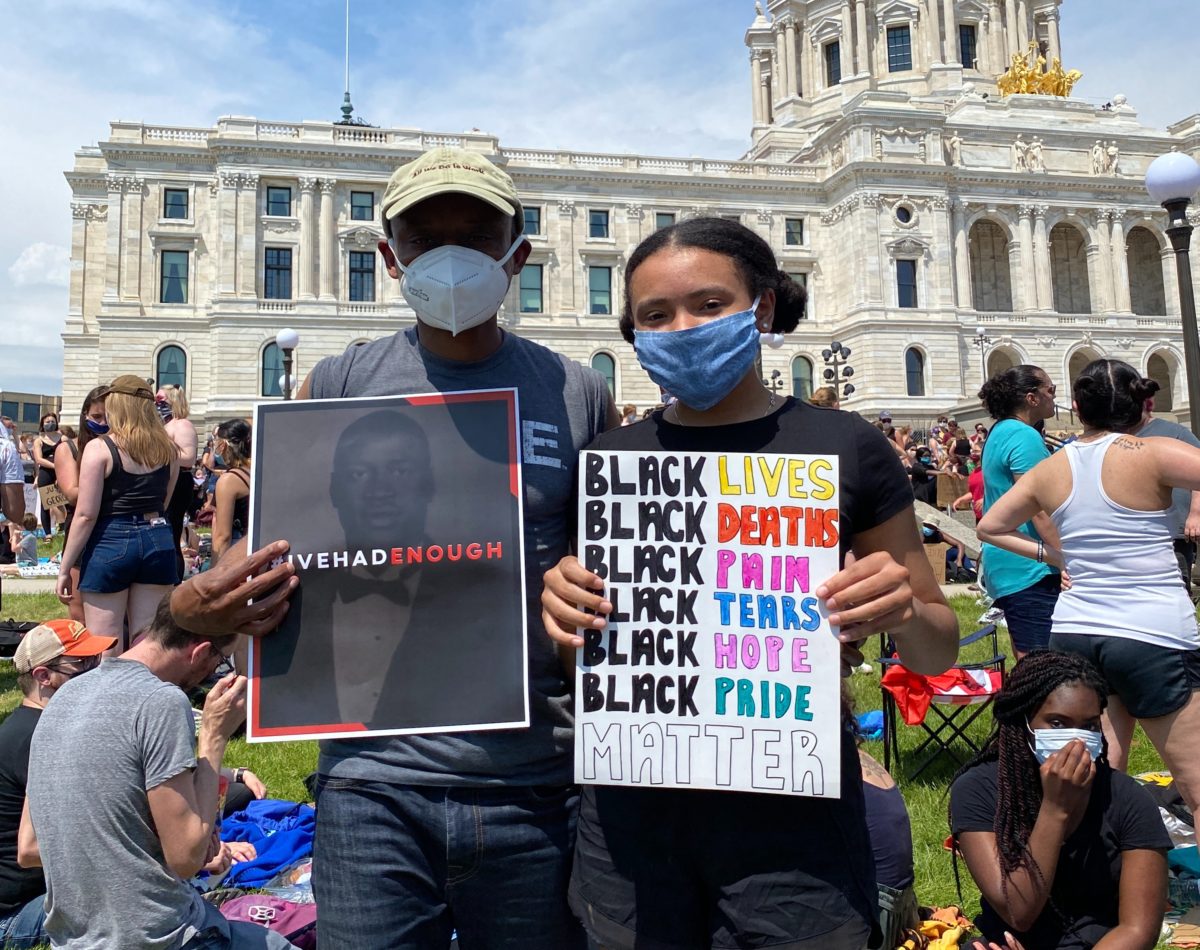 Antone Melton-Meaux protesting in front of the Minnesota State Capitol with his daughter.

Like many parts of the country, the Minneapolis district has grappled with the coronavirus over the last several months. But in recent weeks, the mood in the district has transformed from anxiety and grieving to anger over systemic racism and racial inequality after the killing of George Floyd and the aggressive police response to the nationwide protests that followed.

Melton-Meaux, one of three Democrats challenging Omar in the August 11 primary, told Jewish Insider that although the incident served as a watershed moment in the district, his campaign strategy hasn’t changed. “We have spoken about the institutional systemic racial inequities from the beginning of our campaign,” he said. “It’s one of the reasons I decided to run for Congress. So the tragedy of George Floyd has amplified that component of our campaign, so that we can demonstrate the leadership that the people are hungry for.”

This week, Melton-Meaux’s campaign released two television ads highlighting his background as a mediator — a skill set, he says, he wants to bring to a divided Washington. “The political culture in Washington is toxic,” Melton-Meaux says in one of the ads. “We don’t need more dividers… I will bring people together and get things done for our community.” In the other ad, he discusses the hurdles he faced growing up and the current challenges of protecting his children from racial injustice.

“I would say that the tragedy of George Floyd has made it clear that leadership matters, and how our elected officials serve their residents matters,” Melton-Meaux stressed in a recent interview with JI. “We can’t wait any longer. We need leaders who will take up the mantle and do the hard work with the people to make that change happen.”

Campaign officials told JI that the campaign will launch an integrated marketing strategy in the coming weeks in an effort to deliver Melton-Meaux’s message to voters.

Since Floyd’s murder, Melton-Meaux has participated in local protests and marches across the district, engaging with constituents about the need for police reform. At one gathering, he joined his 16-year-old daughter, Ava, and thousands of high school and college students at the Minnesota State Capitol for a moment of silence in Floyd’s memory. “It was a beautiful thing,” he said of the experience, which was dubbed as a “sit and breathe” protest.

“Residents of my district are tired and frustrated by the seemingly intractable problems we have with police violence, particularly how the police interact with people of color. The inequities that have fueled this moment have existed for decades,” Melton-Meaux said. He called Minneapolis Mayor Jacob Frey’s handling of the protests “imperfect,” pointing to the jeers Frey received during a rally last week after he refused to commit to defunding the city’s police department. “The crowd booing Mayor Frey’s answer is a clear expression of that anger and frustration,” he explained.

“After decades and centuries of abuse, people will no longer accept being told to be patient or accept incremental change,” he added. “As a black man, I truly understand those feelings. More of the same is not acceptable. It’s time for massive, systemic structural change in public safety. I not only support that, I’m also encouraged by the passion and calls for action in the community.”

In recent weeks, Melton-Meaux has managed to keep his momentum going as he seeks to raise his profile, according to political observers. Nonpartisan pro-Israel groups like NORPAC and Pro-Israel America have hosted virtual fundraisers for the candidate.

“I am very pleased to have the support of the pro-Israel community, as well as many other communities that have seen the value of this campaign,” Melton-Meaux told JI. “We are doing well with our fundraising so that we can be competitive with the congresswoman [and] to make sure we’re getting our message out and connecting with residents for the upcoming primary.”

Melton-Meaux refrained from directly attacking Omar, who recently lost her father due to COVID-19 complications. He suggested that voters in the district are looking for a representative who can build relationships with other lawmakers to deliver results. “We are making sure as a district that we are bringing people along so their voices are heard and that we are building bridges, not burning bridges,” he said, “to make sure that local, elected and federal officials are working together to bring the resources that people need to address these crises that we’re dealing with right now — both with COVID-19 and with the murder of George Floyd.”

Read our previous feature of Melton-Meaux and his policy views here.