Buttigieg: Iran deal was close to a true ‘Art of the Deal’ 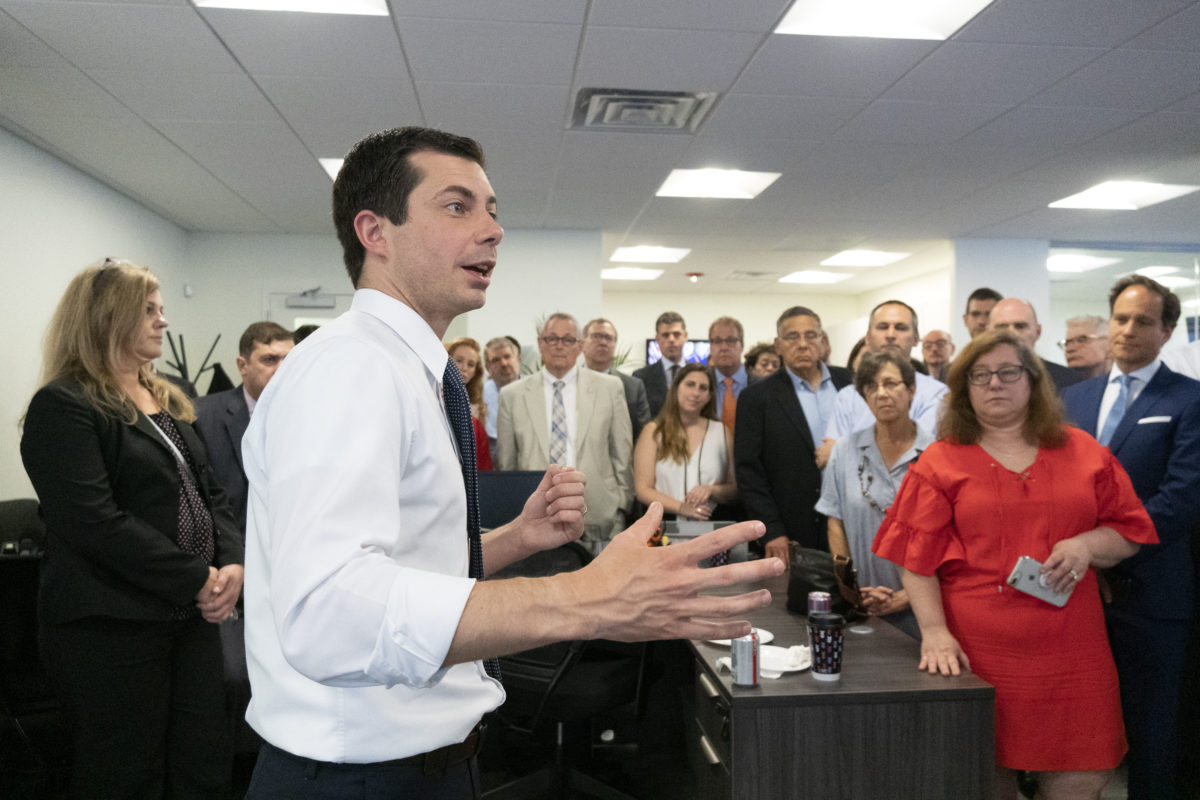 Mayor Pete Buttigieg meets with leaders of the Jewish community at a communal parlor meeting at the offices of Bluelight Strategies in Washington D.C., U.S. on May 23, 2019. Credit: Stefani Reynolds / CNP

On Tuesday, South Bend Mayor Pete Buttigieg pledged to reenter the 2015 nuclear deal with Iran in a foreign policy speech at Indiana University in Bloomington, Indiana.

“Preventing the spread of nuclear weapons should remain a core tenet of our global leadership. For this reason, I will rejoin our international partners and recommit the U.S. to the Iran nuclear deal,” Buttigieg announced.

Buttigieg did not specify whether he has any preconditions towards re-entering the deal.

“Whatever its imperfections, this was perhaps as close to a true ‘art of the deal’ as it gets,” the 2020 presidential candidate explained in a swipe at President Trump, who authored the Art of the Deal and who withdrew from the JCPOA last year. “As even this administration repeatedly certified it was preventing Iran from acquiring nuclear weapons. It has helped constrain the military threat that Iran poses to Israel and Europe without leading up down a path to another Middle Eastern war. This agreement was concluded not to do Iran a favor, but because it is in our national security interest, just as a parallel policy of confronting Iran’s support for terrorism and abysmal human rights record reflects our values and security interests.”

Buttigieg also threatened to make Israel pay a price if Netanyahu moves forward with his promises to annex parts of the West Bank.

“If Prime Minister Netanyahu makes good on his threat to annex West Bank settlements, he should know that a President Buttigieg would take steps to ensure that American taxpayers won’t help foot the bill,” he declared.

“The closer an ally, the more important it is that we speak truth to them,” Buttigieg stressed about U.S.-Israel relations. “The security and survival of the democratic state of Israel has been and continues to be an essential tenet of U.S. foreign policy and is very much in our national interest, which is why neither American nor Israeli leaders should play personal politics with the security of Israel and its neighbors. Just as an American patriot may oppose the policies of the American president, a supporter of Israel may also oppose the policies of the Israeli right-wing government, especially when we see increasingly disturbing signs that the Netanyahu government is turning away from peace.”

Regarding the Israeli-Palestinian peace process, Buttigieg said, “Israeli and Palestinian citizens should be able to enjoy the freedom to go about their daily lives without fear, and to work to achieve economic well-being for their families. As Israel’s most powerful and most reliable ally, the United States has the opportunity to shape a more constructive path with the tough and honest guidance that friendship and fairness require. The current state of affairs cannot endure. The pressure of history and the mathematics of demography mean that well before 2054 Israelis and Palestinians will have come to see either peace or catastrophe. A two-state solution that achieves legitimate Palestinian aspirations and meets Israel’s security needs remains the only viable way forward, and it will be our policy to support such a solution.”