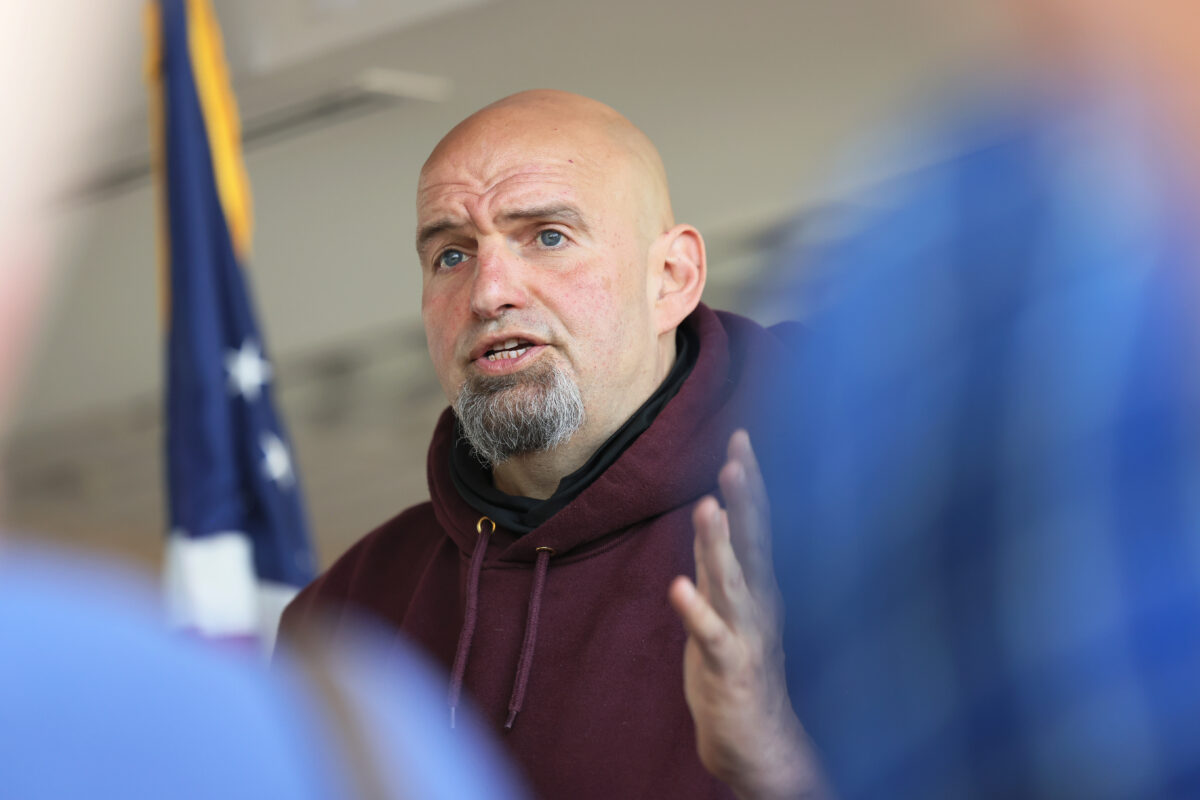 Pennsylvania Lt. Gov. John Fetterman campaigns for U.S. Senate at a meet and greet at Joseph A. Hardy Connellsville Airport on May 10, 2022, in Lemont Furnace, Pennsylvania.

Democratic Jewish Outreach Pennsylvania hosted a fundraiser last night for Pennsylvania Lt. Gov. John Fetterman, one of the first in-person events the Pennsylvania Senate candidate has held since having a stroke two months ago. Attendees said the candidate appeared healthy and in good spirits, while acknowledging that he has not yet fully recovered.

Steve Irwin, a Pittsburgh attorney and former House candidate who has known Fetterman for several years, said the event — which took place on Fetterman’s first day back on the campaign trail — was the first time he has seen the candidate since his stroke.

“He looked good. He looked physically healthy. His color was good, he wasn’t too thin. He displayed a wide range of emotions. He made people laugh. He was very warm,” Irwin said. “He really came across not that different from the John that we knew beforehand. But clearly he had a stroke and it was a long day for him.”

Fetterman attended three fundraisers on Thursday, according to Politico. DJOP leaders said he spoke at their event for nearly half an hour about both policy and campaign strategy, including the recent House vote to protect contraception and the Supreme Court’s ruling last month overturning abortion rights. They said that Fetterman — still wearing his signature hoodie and gym shorts — also joked with the crowd of around 150 and stuck around to shake hands and take pictures.

“He was very transparent about the fact that he had a stroke two months ago… so kind of bear with him a bit because he’s not 100% and he’s on his way back,” DJOP founder Brett Goldman said. “But he’s super excited to get back out there, and you can see that just in the way that he was interacting with the crowd.”

Irwin noted that neither Fetterman’s wife, Giselle, nor his staffers were “trying to control him.”

“He didn’t seem scripted, he was comfortable,” Irwin said.

DJOP chair Jill Zipin told JI it was “just luck” that the event was one of Fetterman’s first back on the trail, and it had been scheduled shortly after Fetterman won the primary in May. She declined to share how much the event had raised.

Attendees said that the subject of Israel did not not come up during the event. Last week, Fetterman touted the endorsement of Peace Action, a group that aligns with organizations that support the Boycott, Divestment and Sanctions movement against Israel.

During the primary cycle, Goldman told JI that he had found Fetterman somewhat inaccessible to the Jewish community in his official capacity, recounting that past attempts to engage Fetterman had “either been put off for some reason or really surface level.”

DJOP leaders emphasized that they felt the situation had now changed.

“I think he’s been very open to speaking to the Jewish community. He was very happy to receive our endorsement,” Zipin said. “[The campaign has] been very accessible, they have returned every call and email I sent them with rapidity, they were lovely to deal with tonight.”

Goldman said that Fetterman “understands the value of working with our community,” and described it as “huge milestone” and “very refreshing” that Fetterman had emphasized his support for Israel during a primary debate.

“He’s definitely built a stronger relationship with the Jewish community than I think existed a couple of years ago,” Goldman continued.