Using ‘chutzpah’ to defend Israel in the U.N.

In his new tell-all book, Israel’s former ambassador to the United Nations, Danny Danon, offers new insights into the lowest point in Israel-U.S. relations in the international body 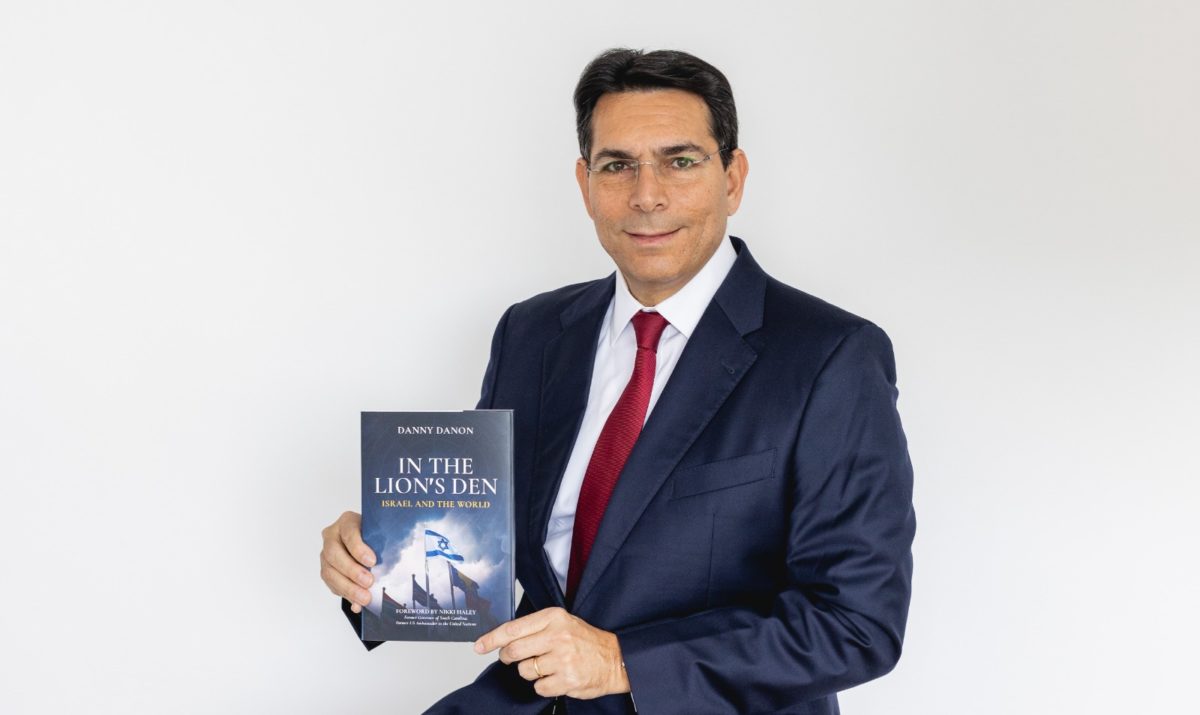 Former President Barack Obama’s controversial decision to abstain from vetoing an anti-Israel resolution in the United Nations in December 2016 is considered by many to be the lowest point in Israel-U.S. relations in recent years.

Now, a tell-all book by Danny Danon, Israel’s then-ambassador to the world body goes behind the scenes, revealing how, during the fraught days leading up to the vote for Resolution 2334, which condemned Israeli settlements in “Palestinian territories occupied since 1967, including East Jerusalem,” American diplomats pressured other countries to back the motion and President-elect Donald Trump, who would assume office the following month, took his first steps to support Israel since winning the election.

In his new book, In the Lion’s Den: Israel and the World, Danon, who served from 2015-2020 as Israel’s 17th permanent representative to the U.N., details how the American delegation stonewalled his team, with Obama refusing to take calls from then-Israeli Prime Minister Benjamin Netanyahu. Danon also recounts how he found himself going head-to-head in the U.S. media with then-U.S. Secretary of State John Kerry.

A former Israeli government minister and longtime Likud politician, who is known for speaking out on nationalist issues, Danon also shares his insights into how his Israeli chutzpah came in handy inside an institution known for its systematic bias against the Jewish state.

It was this passion, perhaps, that compelled Danon to challenge Kerry at the time, who, in an attempt to explain the administration’s decision to refrain from using its veto to defend Israel – as it had done traditionally in the past – made a contentious speech calling Netanyahu’s government the “most right-wing coalition in Israeli history” and warning that rapid expansion of Israeli settlements in the West Bank meant that “the status quo is leading toward one state and perpetual occupation.”

“I was uncomfortable debating with the secretary of state in the media,” Danon, who recalled running between news networks in New York to speak on behalf of Israel, told JI. “But I could not have stayed quiet, I could not have ignored what he said.”

But, according to Danon, Kerry’s damning speech was not the most shocking event in the days before and after the Dec. 23 vote. He said that Israel initially had a good relationship with the U.S. delegation and recalled how he had worked closely with then-U.N. Ambassador Samantha Power, who today heads the United States Agency for International Development.

“They supported us, and we did great things together,” Danon said, describing how it was thanks to support from the U.S. mission in June 2016 that he was elected as chairman of the U.N. Legal Committee – a first for Israel since joining the international body in 1949.

It all changed a few months later, continued Danon, when Power was instructed by the White House to push forward Resolution 2334, which, in its final format, was proposed by Malaysia, New Zealand, Senegal and Venezuela, in the Security Council.

“The U.S. team were in a difficult position because they did not want to tell us what was happening,” he said. “I think that was a mistake; I would have appreciated it if they had called me and told me what was happening, but they chose to play it quietly.”

The resolution, which demanded Israel cease Jewish settlement activity on Palestinian territory and declared the settlements had no legal validity, passed in a unanimous vote. Fourteen of the 15 Security Council members supported the motion. Only the United States abstained, breaking a reliable pattern of blocking resolutions condemning Israel.

“We know that the U.S. was also instrumental in drafting that resolution and in gathering support for it from other countries,” said Danon, who documents the events in his book.

“But I could not get an answer from Samantha; she just told me that they had not received any instructions on the vote,” he said. “When I asked her to connect the prime minister [Netanyahu] to the president to get information directly from him, the answer she gave was that Obama was unavailable, that he was in Hawaii with his family.”

Danon continued: “That was shocking for me because I know that it’s possible to go to Hawaii with your family but to also take a phone call from your closest ally.”

He said that he was also shocked to find himself forced to “fight against our closest ally.”

“We had worked together with the U.S. against so many resolutions,” said Danon. “I was used to fighting the Palestinians, the European Union, the Russian, and many other forces in the U.N., but now I was also up against the United States.”

During her confirmation for the USAID position in Congress last year, Power – who did not immediately respond to a request for comment from JI –  told the Senate Foreign Relations Committee that the decision to abstain was “in keeping with President [Barack] Obama’s desire to encourage the parties to avoid unilateral steps, including terrorism, incitement to violence and the building of settlements.”

“The problem with the resolution,” she said in the committee, “was, by and large, the venue, because the U.N. has been so biased.”

Danon revealed to JI that, weeks later, he was shocked to discover that countries considering abstaining from the resolution were encouraged by the Obama administration to vote in favor.

“I was shocked by the manipulation behind this resolution,” he said, noting that Britain and Ukraine were pressured by the U.S. to support the resolution so that the U.S. would stand out as the only country that abstained, which, Danon suggested, would allow the Americans to save face with its closest ally.

“It was not the content of this resolution that was shocking, it was the way it was done,” said Danon. “We knew Obama had issues with the Jewish communities in Judea and Samaria, we knew he was upset with Netanyahu for speaking in Congress against the Iran deal, but you expect your strongest ally to be honest about what it is doing.”

Power did not respond to a request for comment from JI.

Meanwhile, as the drama was unfolding, Trump and his team were already working behind the scenes to garner support for Israel and succeeded in swaying Egypt to withdraw its sponsorship of the resolution.

“Trump was active, making phone calls to different capitals, but his power then was limited,” Danon said.

Shortly after the resolution passed, Trump tweeted, “as to the U.N., things will be different after 20 Jan.”

The foreword for Danon’s book is written by Nikki Haley, who Trump appointed as America’s permanent representative to the U.N. soon after taking office and who worked closely with Danon. He also describes bringing Haley to Israel for her inaugural visit as ambassador.

“She learned all the issues very fast,” said Danon of the former South Carolina governor. “When we came back from Israel, she was involved in issues that really changed the reality of Israel in the U.N.”

During Haley’s tenure, she was a fierce defender of Israel, overseeing the U.S. withdrawal from the Human Rights Council, which she described as having “chronic bias against Israel,” and the defunding of UNRWA, the U.N. refugee organization that Israel believes perpetuates the conflict by granting Palestinians indefinite, inherited refugee status. Danon said that Haley’s replacement, Kelly Craft, continued the administration’s pro-Israel policy.

As for the current administration’s approach to the U.N. Danon observed that the pendulum has swung back again. President Joe Biden’s appointed ambassador, Linda Thomas-Greenfield, announced in April 2021 that the U.S. was restoring aid of some $150 million to UNRWA, and in October 2021, it officially rejoined the Human Rights Council.

Danon said a large part of the challenge lies in the language used to describe and condemn the Israeli-Palestinian conflict.

“Looking at her [Thomas-Greenfield’s] statements, her language tries to draw moral equivalency between Israel and terrorist groups such as Hamas; she calls for calm from all sides,” he pointed out. “I would never have accepted such language.”