Summer Lee pushes back against charges that she’s anti-Israel

​​In a Pittsburgh JCRC event, the progressive House candidate sought to clarify a number of positions that have drawn criticism 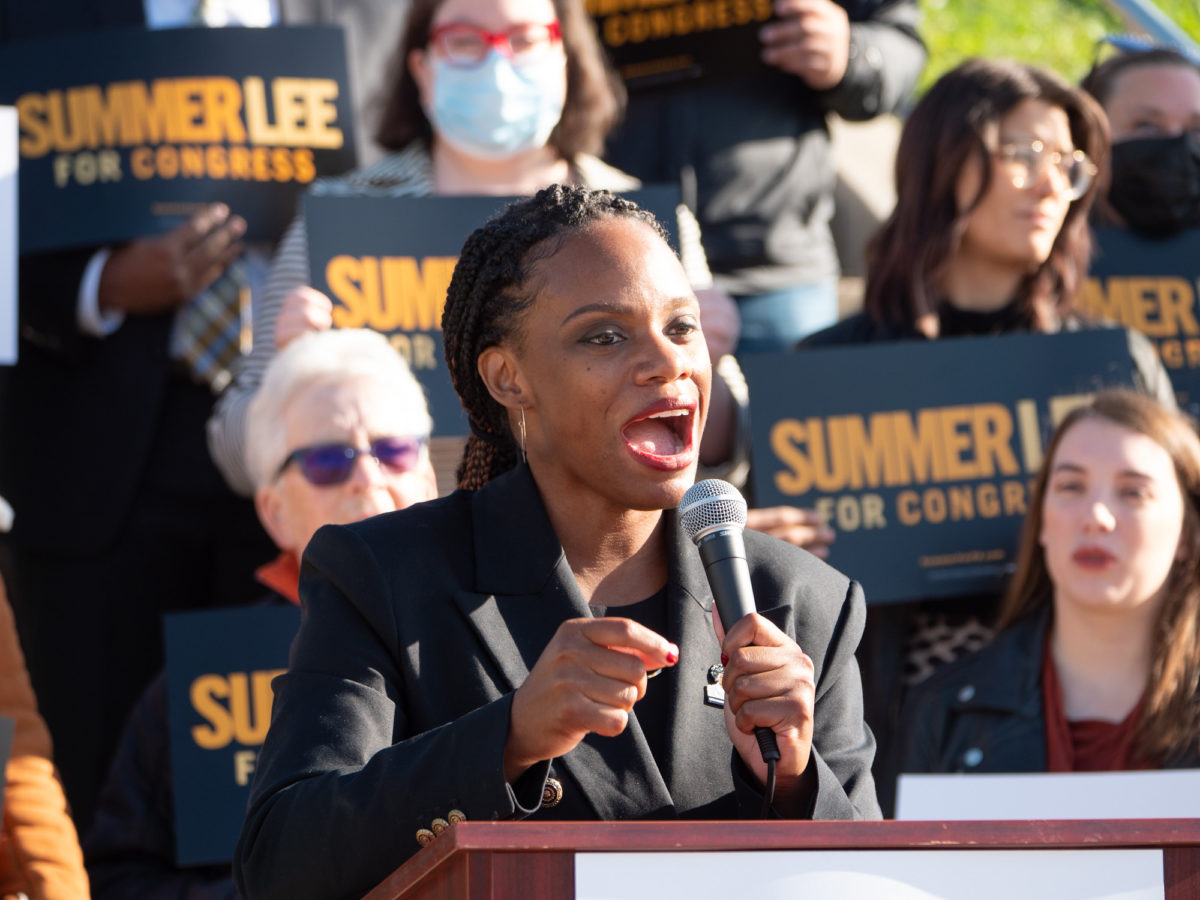 In a wide-ranging and occasionally tense discussion with the Jewish Federation of Greater Pittsburgh’s Community Relations Council on Monday evening, Summer Lee, a progressive state legislator and leading Democratic primary candidate in Pennsylvania’s 12th Congressional District, publicly clarified her views on a host of Middle East foreign policy issues for the first time since launching her campaign.

The hourlong exchange, live-streamed on Facebook, was of particular interest to Jewish voters in Pittsburgh who have expressed reservations over Lee’s affiliation with the party’s far-left flank as well as some social media comments on the Israeli-Palestinian conflict that have drawn scrutiny.

Lee’s chief rival, Steve Irwin, an attorney and longtime Democratic activist in Pittsburgh, charged in a recent interview with Jewish Insider that Lee’s past statements “do not indicate a strong conviction that Israel has a right to exist.”

But in a conversation with Laura Cherner, who directs the Community Relations Council, Lee, 34, rejected such claims, noting that she “absolutely” believes in Israel’s legitimacy as a Jewish state. “What’s more is that I also understand and really truly believe the need that we have for Jewish folks globally to have a safe haven,” she emphasized. “I think that our role has to be in how we are ensuring the safety of all folks over there right now.”

Lee found herself navigating somewhat choppier waters when she was asked to address a tweet in which she had criticized American politicians who “use the refrain ‘Israel has the right to defend itself’ in response to undeniable atrocities on a marginalized” population last May amid escalating violence between Israel and Hamas in Gaza.

In response, Lee argued that there was a “very specific context around” her remarks, pointing to an accompanying tweet where she had drawn a broader parallel between Israel’s actions and the killing of Trayvon Martin, an unarmed Black teenager who was fatally shot by George Zimmerman 10 years ago in Florida. “It’s important that we talk about what that context was, and what we were seeing and what I was seeing as a Black woman, somebody who has also experienced oppression.”

By way of illustration, Lee cited an instance “during Ramadan” a year ago “where we saw a mosque being raided.” She did not specify whether she was referring to Israeli security forces that entered the Al-Aqsa Mosque in Jerusalem last May amid clashes with Palestinian demonstrators, drawing an initial barrage of rockets from Hamas. “Those are folks who are in their most vulnerable point, and they’re holding on, praying and breaking fast,” Lee said of the Muslim worshippers. “That was an internationally recognized event that happened that was an escalation unlike what we had seen.”

Many lawmakers, Lee recalled, were conspicuously silent. Speaking out “would have cost us nothing,” she said. “Instead, I saw American politicians rushing to use the phrase ‘Israel has a right to defend itself.’ But the question was, what were they defending themselves against at that moment? I think that was specifically what that tweet was speaking about. When we are saying that a powerful entity has the right to defend itself when no one had done anything needing defense, that was a parallel that was drawn between Trayvon Martin and George Zimmerman.”

By the time of her tweet on May 14, however, Israel and Hamas were days into a deadly conflict that would represent the worst violence in the region since 2014. Lee made no mention of the rocket attacks or air strikes from either side during the discussion.

As a follow-up, Cherner suggested that “a lot of the reason” there were fewer Israeli casualties than in Gaza was because of Israel’s Iron Dome missile-defense system. American funding for Iron Dome was the subject of a heated House vote last September, when a small cohort of far-left critics objected to legislation that would provide Israel with $1 billion in supplemental aid to replenish the system.

Lee did not explicitly back such funding but said it is “important that we prioritize” assistance “for our allies” when it comes to “legitimate defense.”

The two-term state representative confirmed she is in favor of conditioning U.S. security assistance to Israel guaranteed in a memorandum of understanding between the two countries — a view that is also held by Justice Democrats, which has endorsed Lee’s campaign.

Elsewhere in the discussion, Lee weighed in on the Boycott, Divestment and Sanctions (BDS) movement targeting Israel. BDS is endorsed by the Democratic Socialists of America, of which Lee is a former member. But speaking with Cherner, she emphasized that “it is not a movement that I’m personally a part of.”

Still, she questioned laws at the state and federal level that seek to ban companies from engaging in the movement. “I’m concerned by efforts to criminalize a tactic that is a peaceful protest and, again, that’s rooted in my experience as a Black woman in America,” Lee said. “There are often times where we have to protest and we have to question what our government is doing.”

The congessional hopeful was less sure-footed when asked if she believed Israel is an apartheid state, as Israel critics and some human rights groups have alleged. “I don’t necessarily think that I know the answer to that,” Lee demurred. “I don’t know that I am as well-versed in the intricacies of this.”

Lee suggested that, since she launched her first campaign for state office four years ago, she has been actively learning about the Israeli-Palestinian conflict in conversations with Jewish as well as Palestinian-American residents of Pittsburgh.

“I am very proud of the relationships that I’ve built here in our Jewish communities, and I’m also very proud of the relationships that I’ve been building with the Palestinian community, and listening to those stories and those concerns and those considerations,” she said. “I think that it’s incredibly important that we do not lose the need to protect and stand up for Palestinians, too.”

Lee expressed solidarity with the Jewish community amid a sharp uptick in antisemitic hate crimes, including the 2018 Tree of Life synagogue shooting in the Squirrel Hill neighborhood of Pittsburgh, which sits in the district. “The rise in antisemitism that we’re experiencing in this country is not just alarming,” she said, “but is something that we have to rise up against and we have to speak up against everywhere that we see it.”

While she acknowledged that antisemitic rhetoric can come from the left, Lee argued that far-right lawmakers who have openly espoused extremist views are, overwhelmingly, a more troubling source of concern.

“As we think about who is the face of antisemitism, I sometimes see what, I fear, is maybe a misdirection,” she elaborated. “Even as a politician, as somebody running for Congress, I often see attempts at kind of making Black women, progressive Black women, the face of antisemitism, and the reality is that we will see that even when we are standing in solidarity, hand in hand, as we stand in allyship in these communities, which I believe I’ve done.”

Pittsburgh is home to a Jewish population of nearly 50,000, approximately three-fifths of whom have visited Israel, according to a 2017 study conducted by the Cohen Center for Modern Jewish Studies at Brandeis University’s Steinhardt Social Research Institute.

Lee expressed frustration that her limited number of social media comments on the Israeli-Palestinians conflict had fueled speculation about her views on Israel, which she argued is not only unfounded but ultimately misguided.

“The first thing that I ever heard about my race from one tweet is that I was antisemitic or I didn’t believe in the right of Israel to exist while we literally have white supremacists in government, in Congress, who are explicitly antisemitic,” she said. “Their rhetoric and the power that they hold is a threat to all of our communities, and it’s specifically a threat to the Jewish community. If we are not identifying that clearly, then what we’re doing is we’re allowing them and we’re giving them space for them to continue to exist.”

Lee said she was unfamiliar with the International Holocaust Remembrance Alliance’s (IHRA) working definition of antisemitism when asked if she would support its adoption at the congressional level. Lee emphasized that she was open to discussing such efforts if she is elected. “I think this is a great opportunity to really hear from community members and what the Jewish community feels it needs to be implemented to feel safe and feel protected,” she said. “I think where I want to be aligned is exactly there.”

The IHRA definition includes such examples as “drawing comparisons of contemporary Israeli policy to that of the Nazis,” “denying the Jewish people their right to self-determination” by “claiming that the existence of a State of Israel is a racist endeavor” and “applying double standards by requiring of it a behavior not expected or demanded of any other democratic nation.”

Lee, who lives in Swissvale, has served in the state legislature since 2019 and is among five Democratic candidates who are running to replace outgoing Rep. Mike Doyle (D-PA) in the hotly contested May primary.

The other Democratic candidates in the race include Jerry Dickinson, a constitutional law professor at the University of Pittsburgh; Jeff Woodard, the executive director of Pennsylvania College Access Program; and William Parker, a former Pittsburgh mayoral candidate.

Experts who have spoken with JI view the race as a two-way battle between Lee and Irwin, who has long been involved in organized Jewish life in Pennsylvania. The 62-year-old lawyer has consolidated support from establishment Democrats, including Doyle. He has also earned endorsements from Democratic Majority for Israel and the bipartisan advocacy group Pro-Israel America.

Lee, for her part, has garnered support from lawmakers on the activist left, including Sen. Bernie Sanders (I-VT) and Rep. Ayanna Pressley (D-MA), as well as organized labor groups and the Sunrise Movement.

The Community Relations Council, which is nonpartisan, has also conducted candidate interviews with Irwin and Dickinson.

Near the end of the discussion on Monday night, Lee’s interlocutor asked if she could describe her “main sources of news,” pointing out that the Pittsburgh Jewish Chronicle was in the room.