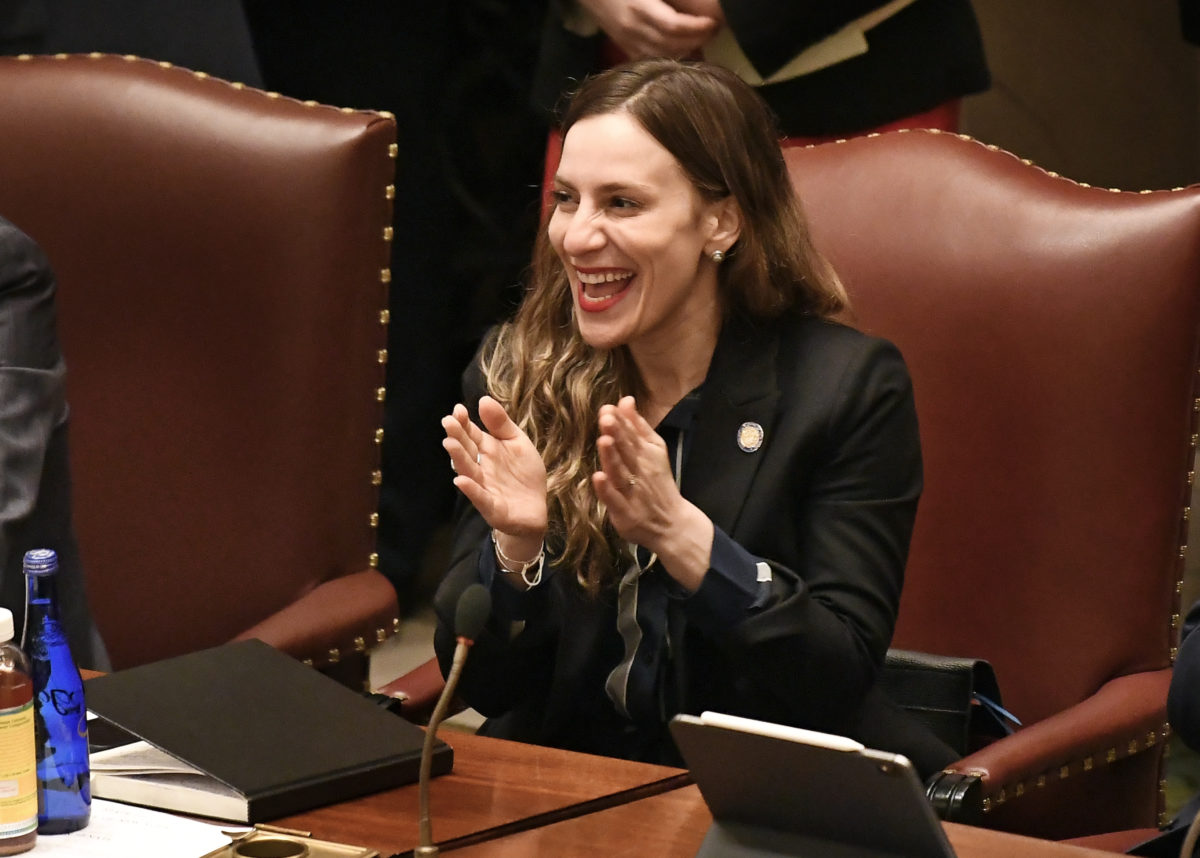 Alessandra Biaggi, a progressive state senator and Democratic political scion representing parts of the Bronx and Westchester, announced her bid for the open House seat in New York’s redrawn 3rd Congressional District on Monday, setting the stage for what is likely to be a competitive primary battle in a swing district that includes large portions of Long Island.

“Our country doesn’t just need more Democrats in Washington, we need bolder ones,” Biaggi said in a statement. “I am running for Congress in NY-3 to bring progressive and honest leadership to the front lines of our country’s most important fights.”

In an interview with Jewish Insider last May, Biaggi mentioned that she had no immediate plans to run for Congress, but suggested she was keeping her options open. “I want to be present to what I’m responsible for,” she told JI at the time, adding: “I also am committed to growth and to making the most impact I possibly can.”

But the two-term state legislator appears to have pivoted following the codification of a redistricting plan that was approved by New York State lawmakers and signed into law by Gov. Kathy Hochul last week.

Among other things, the new House map extends the 3rd District boundaries northward from Queens to include segments of the Bronx and Westchester County in addition to a large swath of northwestern Nassau and northern Suffolk Counties along the Long Island Sound, which still makes up the geographical core of the seat.

Biaggi, who leads the Senate Ethics Committee, was elected to the state Senate in 2018, part of a wave of progressive candidates including Jessica Ramos and Zellnor Myrie who took down a group of powerful Democratic lawmakers in Albany who were known to caucus with Republicans.

If elected to the House, Biaggi would follow the path of her late grandfather, the former longtime Bronx Rep. Mario Biaggi (D-NY), who resigned from office in 1988 amid a corruption scandal but whose name remains familiar to a certain subset of traditional Democratic voters in New York.

“Everyone in New York knows the name ‘Biaggi,’” said Leslie Feldman, a professor of political science at Hofstra University. “That helps her and may put her in the top of the contenders.”

“But to the extent that she is left of Suozzi,” Feldman added, “that may hurt her, as Nassau County went Republican in November.”

Jeffrey Dinowitz, a Democratic New York state assemblyman in Riverdale whose district overlaps with Biaggi’s, echoed that view, speculating that some of her more polarizing past comments, including those in support of defunding the police, “might not play well in large areas of the district.”

“It’s not a left-wing district,” Dinowitz told JI. “But I’m sure she’ll focus on other things.”

Biaggi makes no mention of defunding the police on her campaign website, arguing instead for a need to “focus our police forces on reducing gun violence, domestic violence and other violent crimes.”

Dinowitz suggested that Biaggi could have a path to the general election if, among other things, her opponents split the vote in Long Island, allowing her to gain an edge in other portions of the district where she has a reliable voting base.

George Arzt, a veteran Democratic consultant in New York who is not involved with Biaggi’s campaign, said the state senator has “done a good job” in her current district and would likely gain widespread backing from the party’s progressive wing, which could activate a national grassroots fundraising network that has helped launch a number of left-leaning lawmakers to Congress in recent years.

On Monday, Biaggi earned a boost from a fellow progressive lawmaker in the Bronx and Westchester, first-term Rep. Jamaal Bowman (D-NY). “Let’s go,” he wrote on Twitter after she announced her candidacy.

Bowman, who is a member of the Democratic Socialists of America (DSA), has recently faced some resistance from the far left over his engagement on Israel issues, including voting in favor of legislation that would provide $1 billion in supplemental funding for Israel’s Iron Dome missile-defense system. The DSA’s Madison, Wis., chapter called for the revocation of Bowman’s membership shortly after his vote last September.

Biaggi is not affiliated with the DSA and has said she opposes the Boycott, Divestment and Sanctions movement targeting Israel. “I do not believe that economic sanctions are the way to deal with the Israeli-Palestinian conflict,” she told JI last spring. “It just doesn’t seem right.”

The congressional hopeful has yet to flesh out her foreign policy views now that she is running for federal office, and her campaign site includes no details on international affairs. A spokesperson for Biaggi’s campaign said she was unavailable for an interview on Monday.

Binyamin Krauss, a rabbi who serves as the principal of SAR Academy, a Modern Orthodox day school in Riverdale, said he has not had the opportunity to delve into Middle East foreign policy with Biaggi because it has not been a part of her legislative portfolio.

He described the state senator as “incredibly responsive, responsible and substantive” on a range of Jewish community issues in the district. “When there was an antisemitic issue in Riverdale,” Krauss told JI, “she was out in front of it.”

“While she is unflinching in her morals and values, she is also always willing to listen with an open mind and is virtually without peer on true constituent engagement,” said Michael Davis, a Jewish community leader in Riverdale and the founding partner of The Plymouth Group, a New York City-based real estate investment firm. “She will be a successful and productive leader in Congress if we are all fortunate enough to have her representing New Yorkers on Capitol Hill.”

Still, Arzt emphasized that Biaggi was in for a tough race as she launches her campaign in uncharted political territory. “It’s a troublesome district for her because she picks up a lot of Republicans and a lot of new voters who don’t know her,” he told JI. “Therefore, I’d think that she has her work cut out for her.”

Biaggi, for her part, referenced those new voters in a statement announcing her candidacy on Monday.

“As the representative of the Sound,” she said, “I will work to combat climate change and protect our shorelines, expand voting rights, enact universal pre-K to support working parents, provide opportunity and relief for the middle class, protect abortion rights, ensure public safety and a fair criminal legal system and deliver affordable healthcare for all.”