The Jordanian monarch discussed a range of issues including Ahlam Tamimi, Iran, Israel and Syria 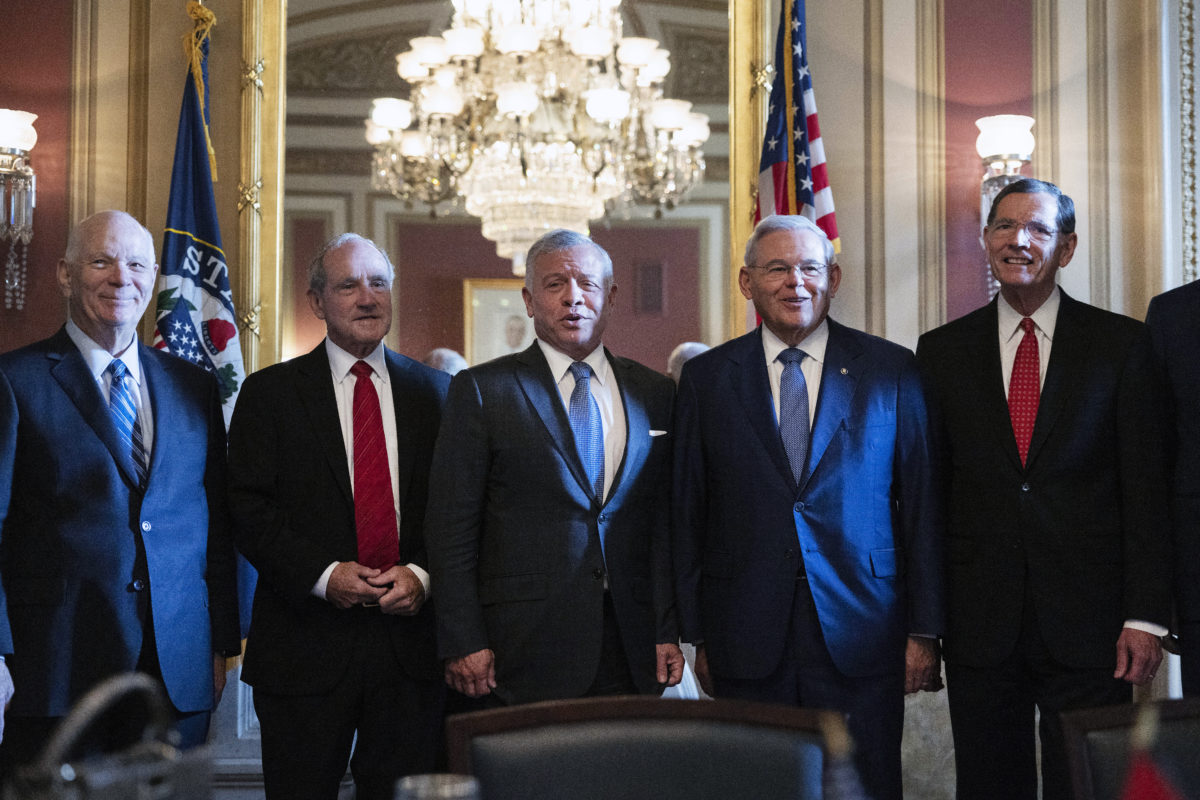 King Abdullah II Of Jordan (C) poses with Senators during a breakfast meeting at the U.S. Capitol on July 21, 2021 in Washington, DC. The King is on a multi-day trip to the United States meeting with President Biden and lawmakers on Capitol Hill. King Abdullah was joined by (L-R) Sen. Ben Cardin (D-MD), Sen. James Risch (R-ID), Sen. Robert Menendez (D-NJ) and Sen. John Barrasso (R-WY).

Jordan’s King Abdullah II received a warm welcome on Capitol Hill on Wednesday, as he met with Senate leadership and members of the Senate Armed Services, Foreign Relations and Appropriations Committees to discuss a range of issues related to U.S. policy in the region.

The Jordanian monarch has visited Capitol Hill during previous visits to Washington, and has made a habit of meeting with lawmakers when he’s in town.

“It was very similar to what it’s been before,” Armed Services Committee Ranking Member Jim Inhofe (R-OK) told Jewish Insider. “The king is a very personable guy — more than most. And he expressed his concerns. We all had a pretty free and open discussion.”

Sen. Ben Cardin (D-MD), who sits on the Foreign Relations Committee, echoed Inhofe. “I always enjoy being with King Abdullah,” he said. “I thought he’s always pretty frank and insightful.”

Sen. Ted Cruz (R-TX), also a member of the Foreign Relations Committee, said he raised the issue of the U.S.’s longstanding efforts to extradite 2001 Sbarro bombing suspect Ahlam Tamimi from Jordan, and described the ensuing conversation as “productive,” but declined to offer further specifics. The bombing, in a popular Jerusalem pizza shop, killed 15 people — including two Americans — and injured 130.

The issue of Tamimi extradition issue did not come up during the meeting with members of the Senate Armed Services Committee, a source familiar with the discussion told JI, but Iran and the Abraham Accords were raised.

On Iran, during the Foreign Relations Committee meeting, “the king expressed very real concerns about the terrorism that would result from billions of dollars flowing to the Ayatollah [Khamenei], about the risk of ballistic missiles being used to target countries throughout the region,” Cruz said.

“What a great ally Jordan is to the United States, to Israel, and they’re critical in that region, especially as we try to get a strong coalition to check the aggressive and destabilizing efforts of Iran,” Sen. Cory Booker (D-NJ), another Foreign Relations Committee member, told JI following the meeting.

Booker said he praised Jordan during the meeting for accepting a large number of Syrian refugees.

“I myself talked a lot about the incredible work Jordan is doing when it comes to assuming the the burden really of so many Syrian refugees, and what that has done at a time that they’re dealing with such high youth unemployment, and how that affects their request for aid from the United States of America,” Booker said. “They’re a valued ally. And I want to make sure that America is playing a role to keep them in a position where they can really continue their support of, you know, critical humanitarian aid as well as the American agenda in the region.”

The Jordanian monarch will meet with House members on the Hill on Thursday.