‘The Netanyahus’ grapples with history, identity politics — and Israel’s most famous family 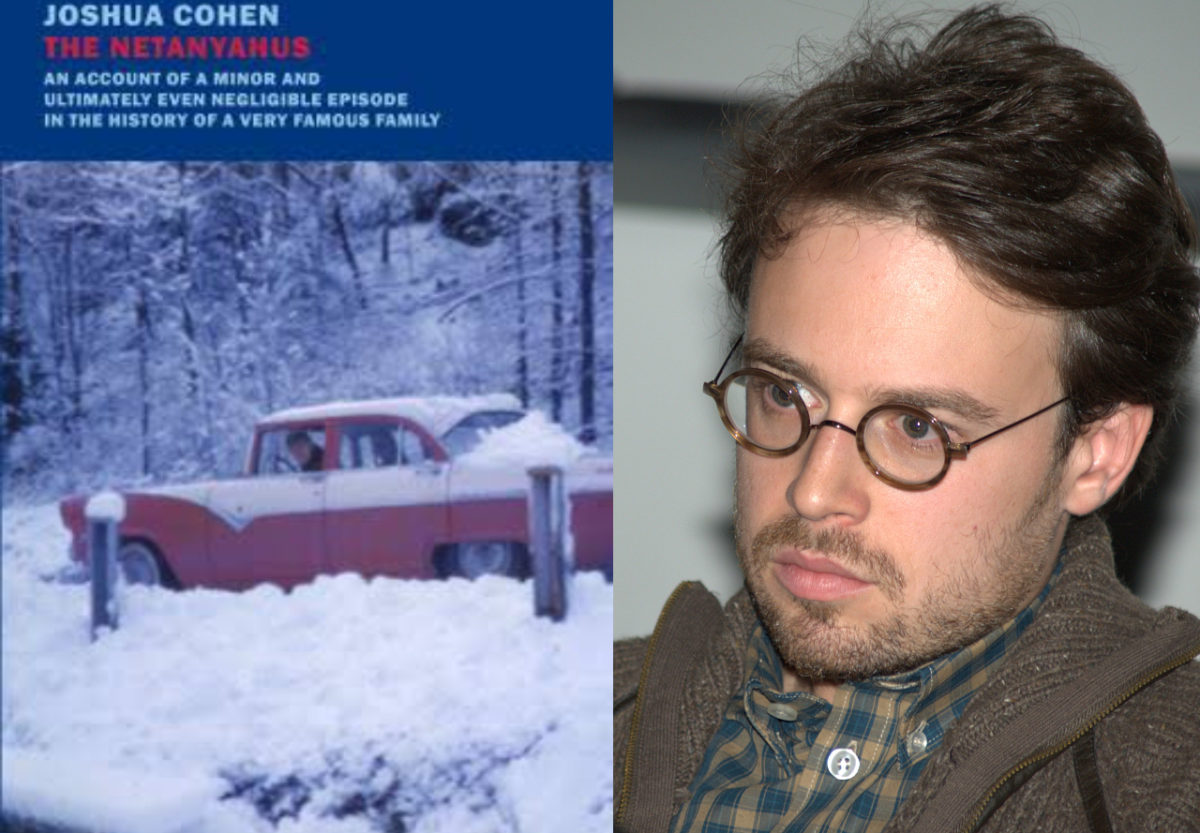 The long arc of Jewish history can be summed up in two words: exile and return.

And so can the essence of American author Joshua Cohen’s new historical novel, The Netanyahus, whose central character is Israeli Prime Minister Benjamin Netanyahu‘s father Benzion, a politically charged historian who was denied a job at Hebrew University for his views — later to be redeemed by the success of his son.

“[Benzion] was a resentful, intelligent man trembling with rage at being excluded from history, at being denied what he regarded as his rightful place in history, and he raised children to take the glory that was denied him,” Cohen told Jewish Insider in a recent interview. “Be careful with the people you reject, because their sons will come and rule you.”

Based on a true experience that legendary literary critic and Yale Sterling professor Harold Bloom, who died in 2019, shared with Cohen before he died, The Netanyahus, which comes out next month, explores the fictional relationship between the Netanyahu family and a college professor.

The book — whose subtitle, “An Account of A Minor and Ultimately Even Negligible Episode in the History of a Very Famous Family,” hints at some of its comic dimensions — is set in the 1950s at a liberal arts college in western New York. Ruben Blum, a professor in the fictitious Corbin College’s history department, studies taxation — but as the only Jewish faculty member at the school, he is assigned to host Benzion, his wife, and their three children, including a young Benjamin, when Benzion interviews for a position at the university. Blum, whom Cohen called a “weak conformist,” must contend with his own unsettled attitude toward this very proud, loudmouthed historian while also dealing with a flood of well-intentioned if deep-rooted antisemitism from his employer.

The book is based on a real experience Bloom had earlier in his career. “One very minor [story] that he dismissed and I had to really pull from him,” said Cohen, “was a little bit of a campus visit by an obscure medieval historian, historian of the Inquisition, from Israel, named Benzion Netanyahu, when he showed up with his wife and three sons in tow for a fairly disastrous job interview.”

Cohen said “it was a sort of minor episode” in Bloom’s life, but “it really stuck with me.” He would bring bagels from New York City’s Russ & Daughters to Bloom’s home in New Haven, checking in on him while letting Bloom, a mentor whom he met late in Bloom’s life, share stories from his life. “His body was failing, but his mind was as penetrating as it ever was,” Cohen recalled. He never got to discuss The Netanyahus with Bloom before he died.

When asked why he chose to focus his book on the real-life Benzion Netanyahu, rather than creating a fictional Israeli historian in the same way he created the narrator from scratch, Cohen laughed: “Because it sells more books,” he joked. But more seriously, he said, Benzion was a historian known for recasting long-ago events through a modern lens. “History, in his hands, became a political tool,” Cohen explained, arguing that Benzion shaped historical narratives in much the same way that novelists shaped fictional narratives.

“I don’t want to use the word fictionalizing, because I feel like people will read that in a certain way, but if [he’s] not in some way doing the same thing that a fiction writer does, or a nonfiction writer does, shaping narratives in certain prejudicial ways in order to fit preconceived outcomes or preset outcomes — I mean, that was very much what Benzion Netanyahu was up to in his career as a historian,” Cohen said. If Benzion would bend genres to apply some fiction-writing techniques to his study of history, then Cohen felt he could do the same, putting a historical figure at the center of his novel.

Benzion Netanyahu is better known for his embrace of Ze’ev Jabotinsky and revisionist Zionism than his scholarship on the Spanish Inquisition. Right-wing politics may be dominant in Israel now, but in the 1940s and 1950s, Jabotinsky’s vision of “Greater Israel” stood in contrast to the more practical Zionism of David Ben-Gurion and Chaim Weizmann. Jabotinsky — and Benzion, his personal secretary — opposed the partition of Palestine into separate Jewish and Arab states, which the United Nations voted to approve, with support from most Zionists, in 1947.

“During the most consequential decades of modern Jewish history, the ‘40s and ‘50s, where is Benzion Netanyahu? He’s not being slaughtered in Europe, and he’s not in Palestine, founding the State of Israel,” Cohen noted. “He’s in New York and suburban Philly. He has essentially been exiled from Hebrew University, because he is a Jabotinskyite, because he doesn’t believe we have to wait for the British [or] for any great power to grant us a land. We have to take it.”

The elder Netanyahu’s politics made him a pariah in some left-wing Zionist circles in Palestine, but he also had to contend with an economic problem: “His job opportunities are disappearing to immigrants,” Cohen said. “Every year that he’s in school, at Hebrew University where he’s studying, there’s a new crop of refugee professors from the greatest universities of Europe who will work for peanuts. If you could hire the faculty of Friedrich Wilhelm University [in Berlin] for peanuts, why are you going to hire a Sabra scholar? So he really finds this necessity of finding his career abroad, of making his career abroad.”

In reality, Benzion did find success in the U.S., teaching at the University of Denver before serving as the dean of the department of Semitic Languages and Literatures at Cornell in the early 1970s. He returned to Israel after his son, Yonatan, was killed rescuing Israeli hostages in Entebbe, Uganda.

The book was a new challenge for Cohen, who had never before written about past eras or set his stories on college campuses. “When I was writing it every day, I said to myself, I’m doing the two dumbest things I could think of. I’m making the two biggest mistakes of my life: I’m writing a historical novel, and I’m also writing a campus novel,” he said. “It felt like if I had taken up jogging or something… so, so out of character.”

He also felt — wrongly, he now admits — that writing books set on college campuses “seems like a kind of tweedy, fusty old man’s game, when you’re washed up,” he explained. But he has found that the reason writers often set books in the past and on campuses is because people like both of those settings. “If I should be concerned [about] anything, it’s that people like this book too much,” Cohen said.

The Netanyahus is Cohen’s 10th book, but it is not his first to focus on Jewish themes. (Bloom referred to Cohen’s 2015 novel Book of Numbers as one of the “four best books by Jewish writers in America.”) Still, he rejects the notion that “Jewish” should be the foremost descriptor for a book with Jewish characters that addresses Israel and antisemitism. “I accept the idea that this is a Jewish book, whatever that means,” he said. “It’s not written in Jewish language.”

Instead, Cohen, 40, prefers to think of The Netanyahus as “a book about campus politics and identity politics.” Although set more than 60 years ago, Cohen said its plot has implications for the complicated issues playing out on campuses today, on topics like intellectual diversity and liberal values and concerns about safe spaces. But, he says, “for me to have sat down and written something about how identity has become ideology on campuses in the third millennium of Christ, that to me would be a little ridiculous.”

Instead, he wanted to write about a situation that could have implications for the modern campus discourse — while also turning readers’ ideas about the politics of the issue on their head.

“In many ways, Benzion Netanyahu would be in agreement with a lot of the politics going on on American campuses today and these sort of self-segregating ideologies. I think that in many ways, he wanted to found a safe space, but he wanted to call that safe space Israel, and he wanted to make a safe space with a nuclear program,” Cohen explained. Campus progressives might have more in common with one of the forefathers of Israeli right-wing politics than they may think. “I wanted to see how the left would feel when I associated them so closely with the right,” he said.

Still, by choosing to place a major historical figure at the center of the book, Cohen wanted his novel to have broader political implications.

“There was, at the heart of the story, a fable,” he pointed out. “It’s the man who is exiled from his land, whose son returns and becomes the king.”

Cohen thinks there are lessons to be learned from the Netanyahu family’s political moves. “I think it’s an important lesson about what we do with our political enemies,” Cohen argued. “If you don’t kill them, they only grow stronger. So there has to be some other way to bring them in.”